Turkey in talks with US to boost bilateral trade to $75B, Albayrak says 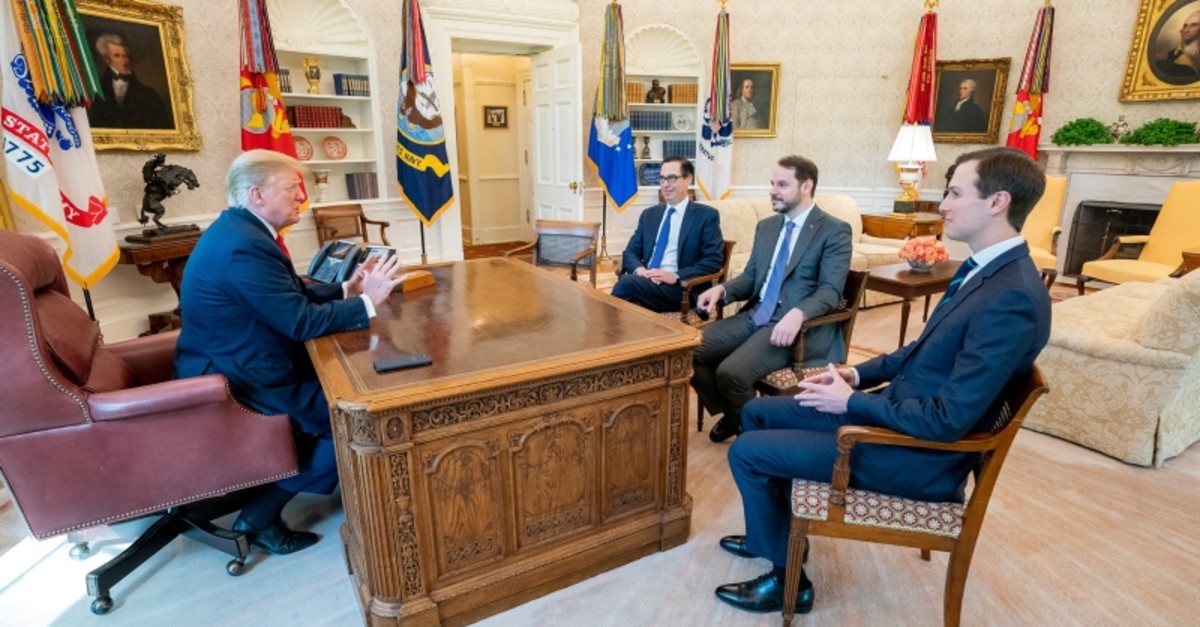 Treasury and Finance Minister Berat Albayrak held talks Monday with his counterparts in Washington to increase the trade volume between the countries to $75 billion, up from the current $25 billion.

Albayrak also met with U.S. President Donald Trump during his visit to the White House and talked about Turkey's purchase of the Russian S-400 missile defense system.

Albayrak said the president displayed a positive outlook on the subject, and he described the talks constructive and positive.

In a separate session, Albayrak and Trade Minister Ruhsar Pekcan held talks with Jared Kushner, senior adviser to President Trump, and Wilbur Ross, U.S. secretary of commerce, along with Turkish and U.S. officials, on expanding the bilateral trade volume.

Albayrak said the second phase of the meeting will be held tomorrow in Washington.

Earlier Monday, Albayrak addressed a gathering of business leaders in the U.S. capital, saying that financial ties between the countries must "be just as robust as our traditional security partnership."

"They should play a more active role in determining the future of the relationship between the two countries. I realize this is easier said than done. But I want to assure all of you that this is our vision," Albayrak said, acknowledging that the "historical depth and institutional strength of the security alliance" has been the "linchpin" in bilateral relations.

Albayrak noted existing strains in bilateral relations between the NATO allies but said they should not "prevent us from looking to the future with a positive outlook."

"Let us avoid threats of sanctions and games of brinkmanship and work on creating a realistic yet positive agenda," he said.

Tensions between the U.S. and Turkey have reached a fever pitch in recent months with Turkey set to begin receiving the advanced S-400 Russian surface-to-air missile system that Washington has said will jeopardize Turkey's role in the F-35 fifth-generation fighter jet program and which could trigger congressional sanctions.

The U.S. has already suspended deliveries of parts and services related to Turkey's receipt of the multimillion-dollar jets.

U.S. officials have advised Turkey to buy the U.S. Patriot missile system rather than the S-400s from Moscow, arguing that the Russian system would be incompatible with NATO systems and expose the F-35 to possible Russian subterfuge.

Turkey, however, has emphasized that the S-400 would not be integrated into NATO operability and therefore would not pose a threat to the alliance.

Albayrak is in the U.S. to attend a three-day business event, organized by the Foreign Economic Relations Board of Turkey (DEIK), Turkey-U.S. Business Council (TAIK), and American-Turkish Council (ATC).