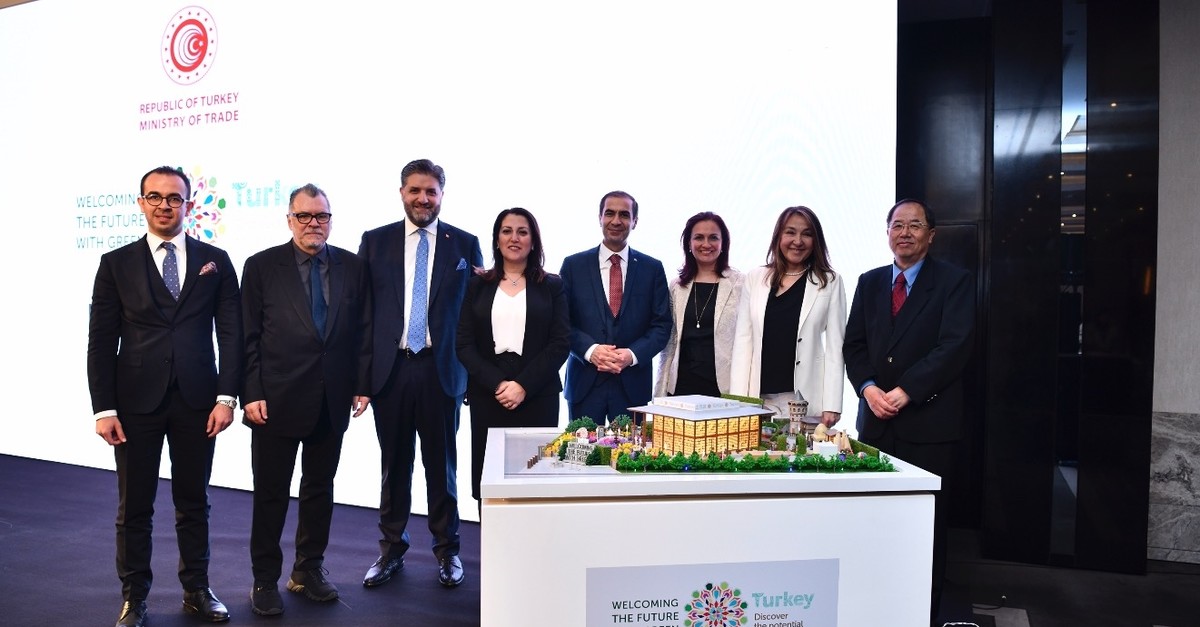 Turkey is one of the biggest participants of the nearly six-month exhibition EXPO 2019 in Beijing and is represented by officials from the Trade Ministry, Turkish companies and the Turkish Embassy in Beijing
by Daily Sabah with AA Apr 22, 2019 12:07 am

The recent decade has seen a boost in Turkish-Chinese ties with the support of growing economic cooperation. In order to make better use of existing ties, the areas of collaboration must be expanded

Ankara and Beijing have intensified efforts to expand areas of cooperation, boost mutual investments and increase trade volume given Turkey's participation in China's Belt and Road Initiative (BRI) as a strategic partner. As the relations get closer, the necessity to share experience and knowledge in miscellaneous areas become a more pressing issue for both sides. Within this perspective, Turkey's Ambassador to Beijing Abdulkadir Emir Önen underscored that the two countries must update areas of cooperation, including education, sports, health and culture in a statement to Anadolu Agency (AA) during EXPO 2019.

Turkey's ambassador to Beijing further noted that Turkey must adopt a future-oriented vision for its rapport with China.

Ambassador Önen elaborated the recent attempts to increase the regular flights between Turkish and Chinese cities in a bid to boost tourism. He stated that Turkey's national flag carrier Turkish Airlines has recently negotiated the launch of direct flights from Xian and Xiamen and the carrier has received a positive response to demands.

The envoy also recalled that China's Southern Airlines will soon launch Wuhan-Istanbul flights and Sichuan Airlines will launch flights between Chengdu and Istanbul. "Turkey's Onur Air is also due to begin flights to China. These flights are important for Turkey to reach its goal of welcoming 1 million visitors from China," he added.

Around 130 million Chinese citizens travel around the world every year and Turkey last year hosted only around 400,000 Chinese tourists.

"Currently, 34 flights travel between China and Istanbul. With the planned flights, the figure will increase by 20 or 25. Our goal is to double the current number of flights," Önen said. "We are now discussing with Chinese authorities a direct flight from China to Nevşehir because it is the second most visited province by Chinese tourists after Istanbul," he added.

The Turkish envoy remarked that Istanbul and Cappadocia in Nevşehir are not enough to welcome more Chinese tourists; therefore, they are working on the promotion of Şanlıurfa-Göbeklitepe as a top Turkish tourism destination in the Chinese market.

Recently introduced to tourism, Göbeklitepe, the world's oldest settlement and sanctuary, prepares to welcome millions of visitors every year.

Elaborating on the activities of the Turkish Embassy in Beijing to promote Turkish tourism Önen noted that they sent a professional group of museum experts to Turkey to dub works at 32 Turkish museums in the Chinese language.

"The voiceover project is now available as an application. A Chinese tourist who goes to Turkey is able to listen to the works of arts in 32 Turkish museums in their native tongue via this app," he explained. A similar project to add 32 more Turkish museums is in the works, he added.

In addition to tourism, the cultural dialogue with China will be expanded through other channels. To that end, Yunus Emre Institute will open a Turkish culture center in Beijing this year, said Önen.

In reference to positive developments in investments, economy and trade between Turkey and China, the ambassador said, "Currently, a number of Chinese firms operate in Turkey. We have no doubt that the interest of Chinese companies in Turkey will continue. As the Turkish Embassy, we aim to make Turkey a top address for Chinese tourists and investors and make China number one destination for Turkish exporters," he said.

With a more than $17 billion trade deficit with China, Turkey is one of the many countries that have a trade imbalance with the world's second-largest economy. According to the Turkish Statistical Institute (TurkStat), Turkish exports to China totaled $3 billion while imports from the country stood at $20 billion last year.

In order to better understand the developments in the Chinese market, Turkey must adopt a future-oriented long-term plan, Önen said. "China is no longer solely a producer country, it is now a consumer society," he said. "Therefore, Turkish exporters should consider what to sell to this market." Before entering this market, he added, the Turkish business world must conduct a very thorough sectoral analysis and act as a local Chinese actor.

Meanwhile, with a view to giving an official character to the cooperation within the framework of the Belt and Road Initiative, the memorandum of understanding (MoU) on Aligning the Silk Road and the 21st Century Maritime Silk Road and the Middle Corridor Initiative between the Republic of Turkey and the People's Republic of China was signed on Nov. 14, 2015 in Antalya during the G20 Summit.