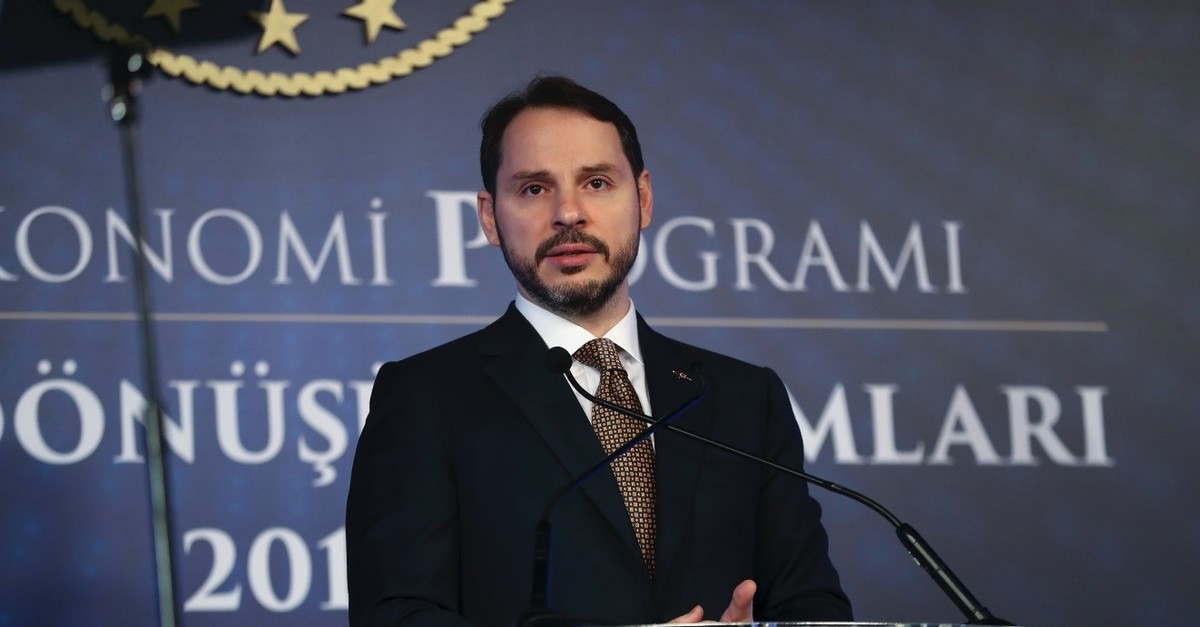 Treasury and Finance Minister Berat Albayrak speaks during the launch of the new economic reform package, Istanbul, April 10, 2019.
by Daily Sabah Apr 24, 2019 12:14 am

The economy administration has begun to take firm steps to boost the balance sheet of state lenders as part of the moves aligned with the structural reform package, unveiled after the municipal elections

After the March 31 municipal elections, the government has pledged an expansive reform package to tackle the most pressing economic issues and implement necessary structural transformations. In accordance with the reform agenda, the economy administration, led by Treasury and Finance Minister Berat Albayrak, has started taking steps to execute the policies defined in the reform package titled Structural Reform Steps that was announced on April 10. On Monday, the Treasury and Finance Ministry announced that it will issue government debt securities worth 3.7 billion euros ($4.16 billion) to support its banking sector.

Minister Albayrak tweeted that Turkey is carrying out policies pledged in the reform package. "We will continue to work determinedly to move our economy to the desired level," he wrote. A total of 3.3 billion euros of the securities will consist of five-year zero-coupon bonds – with a 4.61 percent annual interest rate – for state-run lenders, including Halkbank, Ziraat Bank, Türk Eximbank, Vakıfbank, the Development and Investment Bank, Emlak Participation Bank, Vakıf Katılım and Ziraat Katılım. The last two in the list are participation banks of Ziraat and Vakıfbank. The treasury will also issue government debt securities in the amount of 400 million euros for state-run participation banks – interest-free five-year bonds. With this move, Turkey is working to strengthen the state lenders' funds, Albayrak said in a statement. "The balance sheet of state banks, their capital adequacy ratio and liquidity rates become stronger," he noted.

Minister Albayrak met with the CEOs of the banks operating in the Turkish financial sector Friday to comprehensively evaluate the current state of the banking sector and the policies related to the banking.

From banking to insurance, the reforms will delve into all areas of the financial sector and contribute to the reinforcement of the capital structure of both private and public lenders. As part of reforms in the financial sector, the balance sheets of private banks will be strengthened by relieving them of troubled assets through debt-equity swaps. The ratio of non-performing loans to total cash loans – the lower the better – was 4.11 percent in February, versus 2.92 percent in the same month last year. Moreover, a venture capital fund for the energy industry and a real estate fund will be established.

In addition to the financial sector, the second area the reformation efforts will concentrate on is inflation, which soared as high as 25 percent in October 2018 and retracted to 19.71 percent in March. With a view to reducing inflation, a greenhouse corporation will be established to work as a balancing element in the fresh fruits and vegetable sector. Initially, a technological greenhouse will be built on some 2,000 hectares by this corporation in 2019 to meet 25 percent of the country's total greenhouse production in the long run.

Turkey's reforms in the upcoming period will also be implemented in the judicial sphere. The relation between a fair and effective legal system and strong and sustainable economic development is crystal clear," Albayrak said and continued, "In accordance with our goal to ensure a judicial system that supports an investment environment and boosts investor confidence, the justice ministry is preparing a legal reform strategy."