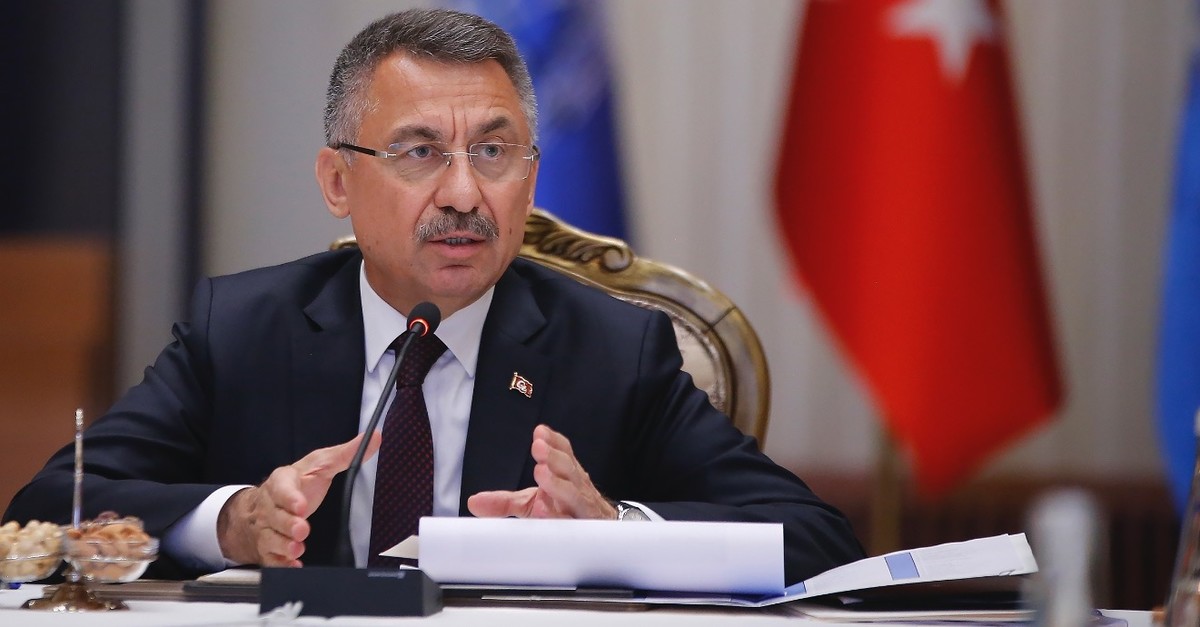 Vice President Fuat Oktay speaks at a meeting of the Coordination Council for the Improvement of Investment Environment (YOu0130KK) in Ankara, April 25, 2019.
by Daily Sabah Apr 26, 2019 12:04 am

Turkey is adamant about implementing reforms with a new vision to attract more foreign investment. The reforms that improved the investment environment in the last 17 years brought in $210 billion in foreign direct investment to the country

The Coordination Council for the Improvement of Investment Environment (YOİKK) convened Thursday to lay out a new revisionist road map for reform that will further strengthen Turkey's investment environment. In his opening remarks at the meeting held yesterday in the Presidential Complex, Vice President Fuat Oktay drew attention to the reforms implemented in the last 17 years. "Turkey has been branded as the most reformist country among the members of the Organization for Economic Co-operation and Development (OECD) in eliminating the hurdles limiting foreign direct investment (FDI). Thanks to these reforms, Turkey has attracted $210 billion in FDI in the last 17 years. YOİKK, formed with the inclusion and contribution of many Turkish associations, bodies and nongovernmental organizations (NGOs) operating in the field of investment, has been conducting activities since its foundation, Oktay said.

YOİKK, formed with the inclusion and contribution of many Turkish associations, bodies and nongovernmental organizations (NGOs) operating in the field of investments, has been conducting activities since its foundation, Oktay said.

The vice president stressed Turkey's determination to conduct sweeping reforms and noted that the meeting will specify the activities to be held in the upcoming period. The council will seek to further improve the investment environment, he added.

The YOİKK will determine flexible and sustainable policies based on national and international circumstances.

YOİKK has made significant contributions to the improvement of the investment climate, according to Oktay, who also noted that all these reform works were carried out by taking into consideration the comprehensive consultations and demands from the sections represented by the participants.

The vice president emphasized that thanks to the results of the dedicated work run by relevant ministries and NGOs and coordinated by the board in the recent period, Turkey ranked 43rd in the World Bank's Ease of Doing Business list for 2019, climbing 17 places compared to previous year, noting that 2.4 percent out of the 5.7 percent average economic growth in the last 17 years came from investments.

According to the report published by the World Bank, Turkey received 74.33 points out of 100, improving 4.34 points compared to previous year. New Zealand, which topped the list, scored 86.59 points.

According to the "Doing Business 2019 – Training for Reforms" report, the previous year's reforms accelerated Turkey's efforts to improve the business climate for domestic small and medium-sized enterprises (SMEs).

Oktay further remarked that the continuation of the momentum in the investment environment depends on the sustainability and development of works carried out by the institutions in the recent period.

He indicated that with the vision it will lay out, YOİKK will be a pioneer for the increase of foreign direct investments, both in the international and domestic arenas.

"In addition to being a platform for solving problems, YOİKK will act with a perspective that aims to create an appropriate investment climate for attracting tomorrow's technology and investments. We aim to make a 'participatory and innovative' spirit of cooperation prevail in our board studies, whose road map and operation with main lines we will be designating today. We plan to primarily include in the process the 'solution oriented, well-defined and result-oriented' reform proposals that our board members will offer to further develop the investment climate," said Oktay.

The contribution and guidance of YOİKK will have important effects on the national development initiative, according to the vice president.

"As a result of the improvement in the investment environment, we expect the international investments that will head toward our country to create added value, provide technology transfer to our country, and the employment figures and the current account balance to follow a more positive course. We should worker harder to attract foreign investment and remain competitive in this period of escalating global competition and financial tightening," Oktay said.