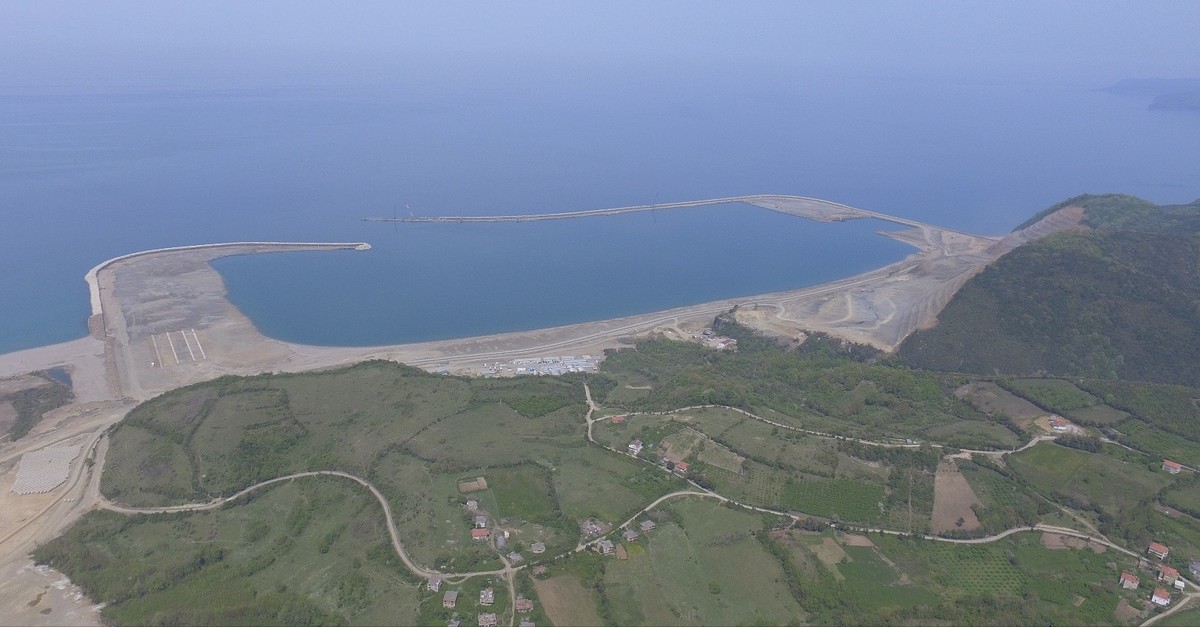 The Filyos Port in Turkeyu2019s Western Black Sea is capable of handling 25 million tons of cargo annually and one of the five largest investment projects in the country.
by Daily Sabah with AA
May 02, 2019 12:07 am

One of the highest-funded investment and development projects in Turkey, Filyos Port, is expected to start operating next year, with a completion rate of nearly 80 percent

The construction of Filyos Port in Zonguldak's Filyos district is to be completed in 2020 as part of the Filyos Project, which was also on the development agenda of Ottoman Sultan Abdul Hamid II. Filyos Port, accompanied by an Industrial Zone, will be among the highest-funded works in the state investment program and will be the third-largest port in Turkey. The port, capable of handling 25 million tons of cargo annually, is one of the five largest investments in Turkey. With the start of work on the project, the process of the assignment of space should gain speed on an area of 606 hectares, which has been declared a Mixed Industrial Zone in the Filyos Valley and is expected to contribute to the region's economy.

Zonguldak Governor Erdoğan Bektaş said that construction of Filyos Port, set to be one of the largest ports on the Black Sea and in Turkey, continues at full speed.

Noting that the dream of Turkey and the region for decades is about to come true, Bektaş said that the Filyos Project is a regional development project consisting of Zonguldak, Karabük and Bartın, the three provinces in the area of responsibility of the Western Black Sea Development Agency (BAKKA).

According to Bektaş, the port infrastructure should be completed by 2020, a 70 percent or 80 percent completion rate. With work in full swing, Bektaş said that a large industrial zone and a free zone in the region have been planned in parallel with the completion of the port. Moreover, 23,000 decares of space in the region can feed and support the port. To attract industrialists, the planned industrial zone has been carried out. The Tosyalı Group, which coordinates the industrial zone, is establishing the first big facility. The Filyos Project is being actualized at high speed.

Indicating that Filyos is the port for the corridor reaching from Konya and İskenderun, as well as of the three cities, Bektaş said that port operation and superstructure would be tendered with a build-operate method. Since the Ministry of Transport and Infrastructure is working on the issue, Bektaş said that tender criteria are yet to be set and that they plan to tender the port to a structure that targets port operation.

Karabük Iron Steel Industry Trade & Co. Inc. (KARDEMİR), the first heavy industry in Turkey, has applied to operate Filyos Port, the foundations of which were laid in 2016 at a ceremony attended by President Recep Tayyip Erdoğan.

KARDEMİR Chairman Kamil Güleç said Filyos Port is of great importance and their sine qua non, noting that KARDEMİR was built inland due to security concerns in 1937. He added that facilities, such as İSDEMİR and ERDEMİR, are built at the seaside in present-day conditions, saying: "A large majority of arc furnaces are at the seaside as well. Our rivals in the world have their ports by the sea. That we are inland brings a burden of about $70-80 million a year in terms of logistics. To minimize this, we must reach a large port. The project, which we've dreamed of for 50 years, was laid in 2016 on the instruction of President Erdoğan. So, infrastructure investments have started. I hope it will be complete by May 2020."

Pointing out that KARDEMİR must have a say in this port, Güleç said that they applied for the superstructure and operation of the port. Also, the first stage of the port, which will have a capacity of handling 25 million tons of cargo annually, is 12 million tons, with 8 million tons belonging to KARDEMİR, which imports raw materials and exports products. Emphasizing that there is no one to bring any larger cargo, Güleç said: "It is a virgin place. Raw materials and exports of other industrialists in Karabük will be 1-2 million tons. Therefore, 9-10 million tons of cargo will belong to Karabük's industrialists. I think that Karabük's industrialists, and KARDEMİR in particular, must have a say in this port."

Since superstructure work should start and progress in parallel with infrastructure, Güleç noted that KARDEMİR would have a port like its rivals in the world in 2021 if not in 2020.

Güleç said that their logistics expenditures would decline to $25-30 million from $70-80 million currently, adding: "This will enable us to compete in the future. It is an important project we closely follow and support. There is no project that our government has started but left unfinished. This will end soon as well. So, Karabük will make its 50 years of dreams come true."