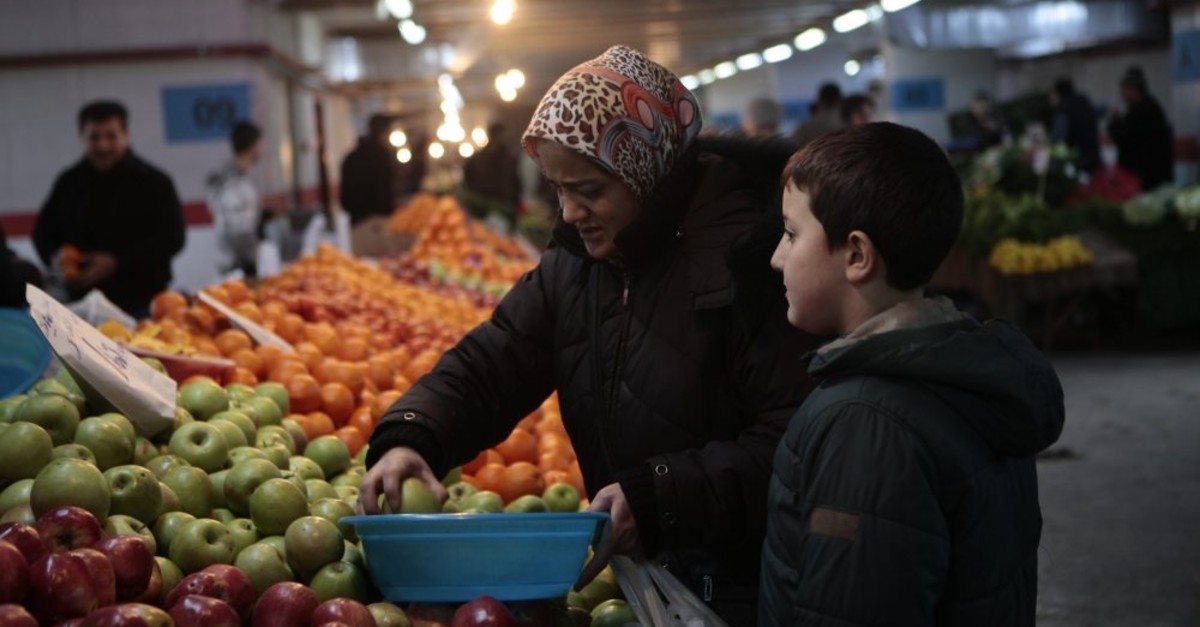 A Turkish woman, accompanied by her son, picks up fruit at a stall in a neighborhood marketplace in Turkey.
by Daily Sabah May 03, 2019 12:28 am

The Turkish government is eager to tackle and bring down inflation and interest rates to targeted levels, according to President Erdoğan, who said all of the steps to be taken will be made under free market rules

The Turkish economy has been tackling high inflation and interest rates over the last year and the country's economic administration has on numerous occasions voiced its determination to use all necessary instruments to lower these digits.

Inflation has been one of the most urgent issues for the country and the government is eager to sweep reforms to tackle issues, including inflation, financial structure, tax regime and agricultural production among others, while ensuring sustainable growth and development and complying with free market rules.

President Recep Tayyip Erdoğan said Thursday the government is determined to reduce interest rates and inflation to targeted levels, stressing that the country will take all its steps under the framework of the principles of the free market system.

"We are certainly determined to lower exchange rates, interest rates and inflation to targeted levels," Erdoğan said, addressing the Turkish Union of Chambers and Commodity Exchanges (TOBB) in the capital Ankara.

Turkey's annual inflation rate stood at 19.71 percent in March, slightly up, 0.04 percentage points, from 19.67 percent in February, according to the Turkish Statistical Institute (TurkStat). On a yearly basis, the biggest price hike was in food and non-alcoholic beverages last month with 29.77 percent.

TurkStat is expected to announce inflation figures for April month today. As laid out in country's new economic program announced last September, the country's inflation rate target is 15.9 percent this year, 9.8 percent in 2020, and 6.0 percent in 2021.

The Central Bank of the Republic of Turkey (CBRT) on Tuesday kept the country's year-end inflation forecast at 14.6 percent this year, 8.2 percent next year and 5.4 percent in 2021. Murat Çetinkaya, the bank's governor, said at a news conference on Tuesday that the inflation rate will fluctuate between 12.1 percent and 17.2 percent throughout the end of this year. He noted that interest rate hikes remained an option if inflation unexpectedly jumps.

At its policy-setting meeting last week, the central bank left its key interest rate unchanged at 24 percent. "We project the inflation rate will stabilize at 5 percent in the medium term under a tight monetary policy stance and enhanced policy coordination," he said.

Çetinkaya also noted that taking into account hikes in unprocessed food and Turkish lira-denominated import prices, the improvement in the underlying trend of inflation under a tight monetary policy stance consistent with the targeted path, the widening of the output gap and downward revisions to the administered price hikes offset these upward effects. "Assumptions for food prices inflation have been revised upwards due to realized inflation figures in the first quarter of the year that were significantly above the historical averages as well as to risks arising mainly from accumulated cost pressures," he said. The bank increased its food inflation forecast to 16 percent for 2019, up from 13 percent in the previous report, Çetinkaya noted. Food inflation next year is expected to reach 11 percent, he said. Last month, Treasury and Finance Minister Berat Albayrak​ announced a new reform package for the implementation of necessary actions to ensure compliance with free market rules, tight fiscal policy, sustainable growth, a fairer tax regime and the coordination of monetary policy with fiscal policy.

Inflation was named among the top priorities the reformation efforts will concentrate on. Minister Albayrak underscored that in order to mitigate food inflation the government will carry out structural reforms in agricultural policy. He said they will be launching a National Unit project in agriculture, which will be the most important structural reform in this area.

Furthermore, in his speech yesterday, President Erdoğan said "all indicators show that the country is entering an upward trend." After concluding the last in a series of elections this March, the president said the government is leaving the period of election campaigning behind to focus on action.

Following local, parliamentary, and presidential elections that have taken place since 2018, Turkey is set to enjoy over four years without elections. Erdoğan underlined that the government is concentrating on structural reforms to strengthen the private sector.