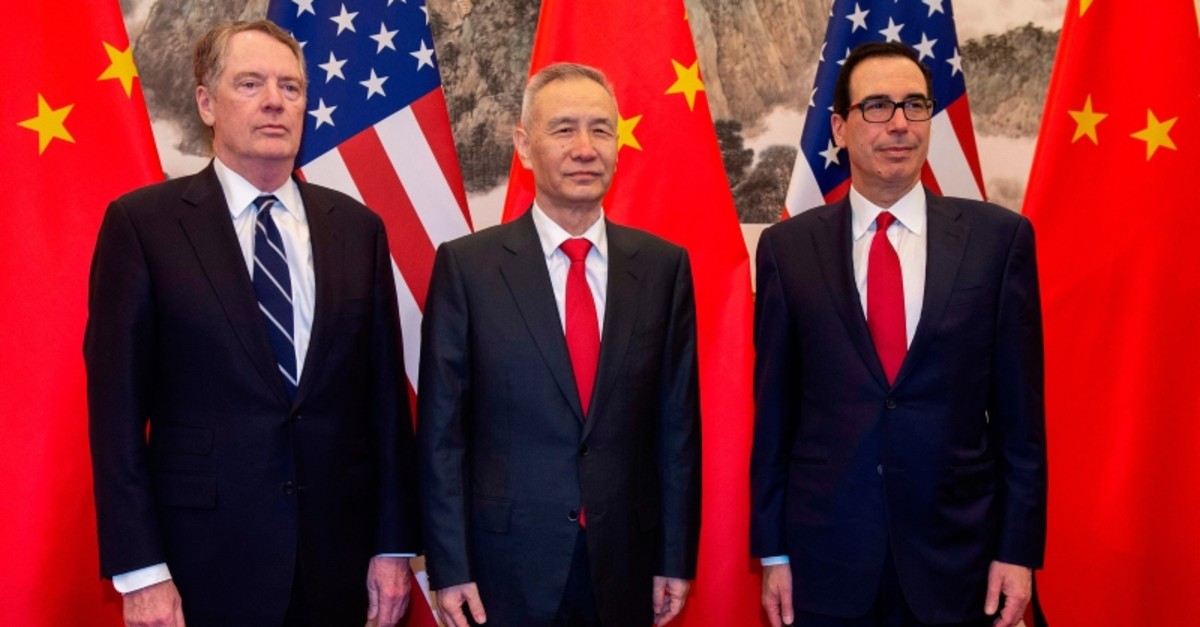 In this file photo taken on March 28, 2019 China's Vice Premier Liu He (C) poses for a photo with US Treasury Secretary Steven Mnuchin (R) and US Trade Representative Robert Lighthizer (L) at Diaoyutai State Guesthouse in Beijing. (AFP Photo)
by Compiled from Wire Services May 06, 2019 11:40 am

Trump's announcement Sunday on Twitter caused financial markets to plunge. It prompted suggestions Beijing might pull out of talks planned for this week to avoid looking weak in the face of American pressure.

Asked whether the top Chinese envoy, Vice Premier Liu He, would visit Washington as planned, Geng said, "a Chinese team is preparing to travel to the United States for trade talks."

Geng declined to give further details when asked who might participate or whether the talks would go ahead as scheduled Wednesday. He referred other questions to the Commerce Ministry, which did not respond to requests for comment.

The announcement and lack of details suggested Beijing is wrestling with the conflict between its desire to end a tariff war that has battered Chinese exporters and its reluctance to appear to be giving in to Washington.

"We hope the United States will join efforts with China and we can meet each other halfway so we make a mutually beneficial agreement on the basis of win-win and mutual respect," Geng said.

The two governments have raised tariffs on tens of billions of dollars of each other's goods in their dispute over U.S. complaints about Chinese technology ambitions.

That has disrupted trade in goods from soybeans to medical equipment.

Trump turned up the heat Sunday by saying he would raise import taxes on $200 billion in Chinese products to 25% from 10% as of Friday. Washington already is charging 25% duty on another $50 billion of Chinese imports.

Trump pushed back deadlines in January and March to raise tariffs in a bid to buy more time for negotiations. But on Sunday, Trump said on Twitter a deal with Beijing was coming "too slowly, as they attempt to renegotiate. No!"

Trump also threatened to slap tariffs on another $325 billion in imports from China, covering everything it ships annually to the United States.

Washington and other trading partners also want Beijing to scale back plans for government-led creation of Chinese global competitors in robotics and other technology. They say those violate the communist government's market-opening commitments.

Both sides say they are making progress but no details have been released.

A sticking point is U.S. insistence on an enforcement mechanism with penalties in the event Beijing fails to stick to any commitments it makes.

Economists suggested Trump took action because China's economy is improving, reducing the urgency for Beijing to strike a deal.

Chinese growth held steady in the latest quarter despite a slump in exports to the United States, suggesting government efforts aimed at reversing a downturn were gaining traction.

"China may have appeared less willing to offer additional concessions," said Citigroup economists in a report. "The threat is consistent with the U.S. increasing pressure on China to achieve these concessions."

Trump's threat makes going ahead with talks "very difficult politically" for President Xi Jinping's government, said Jake Parker, vice president of the U.S.-China Business Council. He said the Chinese public might "view this as a capitulation" if Beijing reached an agreement before Trump's Friday deadline.

If Trump carries out his threat, American companies in China "would be very concerned" about official retaliation, said Parker.

A Chinese decision to pull out of talks could have global repercussions, causing turmoil in financial markets and dragging on economic growth, economists said.

"The risk of an all-out U.S.-China trade war has increased significantly," Tao Wang and Ning Zhang of UBS said in a report.