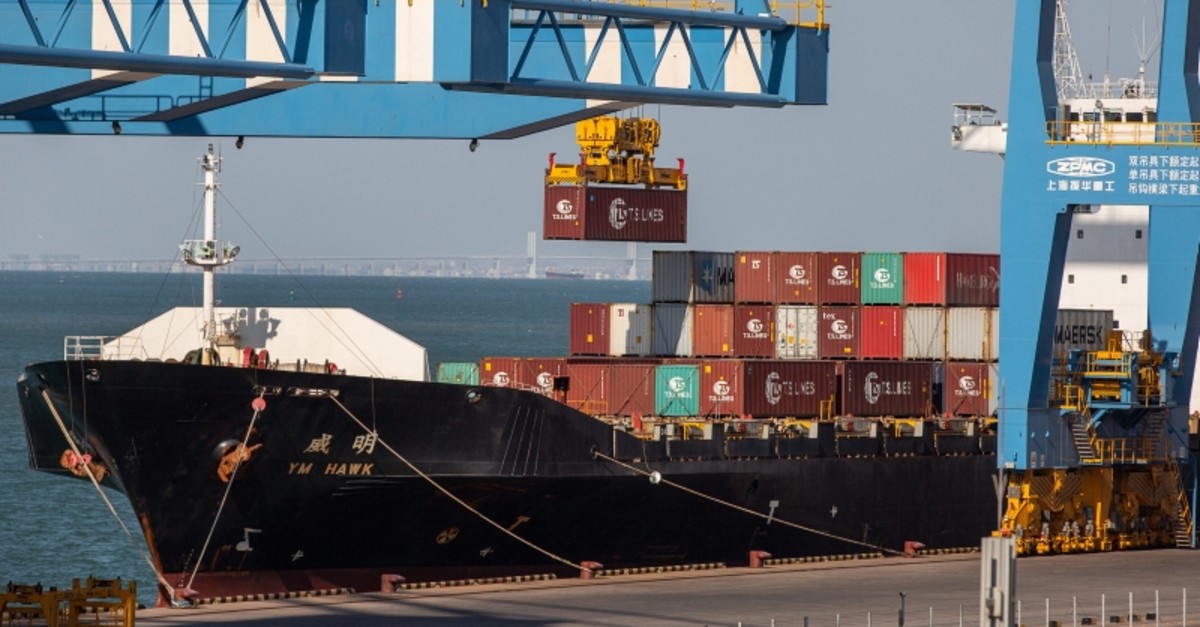 A crane loads a container on a ship at a fully automatic container berth of Port of Qingdao in Qingdao city, eastern China's Shandong province, Oct. 18, 2018. (EPA Photo)
by Compiled from Wire Services Jun 04, 2019 11:15 pm

The latest Global Economic Prospects report shows the world economy is expected to expand by 2.6% this year, three-tenths of a percentage point lower than the January forecast. That would be the slowest calendar-year growth since 2016, and it is down from the 2.9% expansion the agency forecast in January.

The World Bank downgraded every major region, though it kept its 2019 forecast for U.S. growth at 2.5%. In the 19 countries that use the euro currency, growth is forecast to slow to 1.2%, down from 1.8% last year and the 1.6% the World Bank expected in January.

Although the global development lender currently expects a modest recovery 2020 and 2021, the bank said in its semi-annual report that a lot will have to go right for this to happen.

Instead the growing risks suggest the outlook could instead grow darker still.

The greatest danger on the horizon is the prospect of worsening trade clashes between major world economies -- a specter that rose again last week when Trump announced fresh punitive duties on Mexican goods in a dispute over immigration policy.

The World Bank also sounded the alarm about rising debt levels and warned emerging economies they could soon regret the decision to borrow in search of a growth boost.

"The global economic outlook, in both the near and long term, is confronting substantial challenges," he told reporters.

The new forecast was decidedly gloomier than the latest outlook by the International Monetary Fund, released in April, but which likewise predicted a slowdown and warned of the risks posed by trade conflicts.

"The bottom line is that the global economy is coming to a crossroads," said World Bank economist Ayhan Kose, who oversaw the report, told AFP.

"We need to find ways to stabilize growth and I think further escalation of these trade tensions is now the number one risk that could actually weigh on the outlook," he told AFP.

In East Asia and the Pacific, total economic output is likely to drop below six percent for the first time since the Asian financial crisis more than 20 years ago.

China's forecast is little changed, with growth projected to slow to 6.2% this year.

American exports to Europe and Asia have seen an "especially acute" slowdown, and conditions in the eurozone economic have "deteriorated rapidly" as exports to China, central Asia and elsewhere have shrunk, according to the report.

The report did not take Trump's latest tariff threat against Mexico into account -- it was announced Friday and is due to take effect June 10 -- but the World Bank cut the forecast by 0.3 points, calling for expansion of just 1.7% in 2019.

If Trump follows through on his threat, tariffs on all Mexican goods would hit 25% in October.

"The big question is, are we pushing the panic button?" Kose said.

"The answer at the moment is no but I think if tensions escalate further, we have to push the panic button and get ready for a much deeper slowdown."

The forecast also sliced 0.7% off its outlook for Brazil, cutting it to 1.5%.

Kose highlighted concerns over rising debt, saying that since 2007 sovereign debt among emerging and developing economies had risen on average by 15%.

These countries should be "extremely careful" not to allow current low interest rates to entice them into overindulging in more debt, and should instead opt for more reforms that can stimulate investment.

"When you accumulate debt, it makes you more vulnerable to crisis, it limits your policy space and then ultimately, you never know when the interest rate's going to increase," he said.