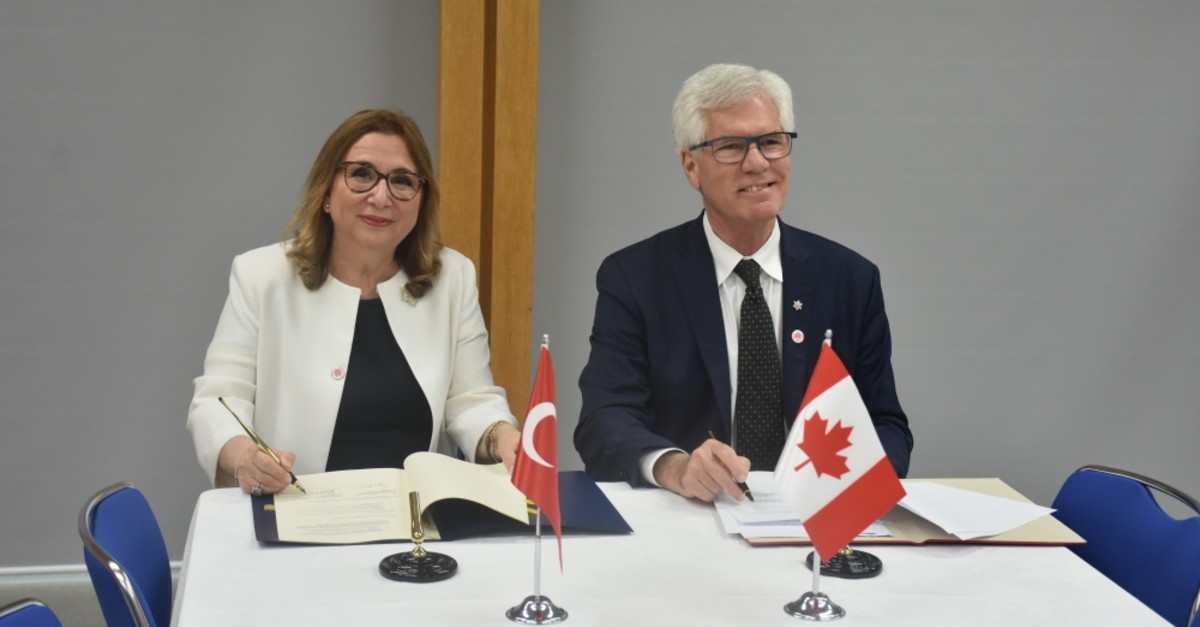 Trade Minister Ruhsar Pekcan and her Canadian counterpart Jim Carr (R) signed the Joint Economic and Trade Commission's MoU at the G20 Ministerial Meeting on Trade and Digital Economy in Japan, June 8, 2019.
by Daily Sabah with AA Jun 10, 2019 12:17 am

Aiming to enhance their trade ties, boost bilateral investments and pave the way for the businesspeople, Turkey and Canada inked a Joint Economic and Trade Commission's memorandum of understanding

Turkey and Canada signed a memorandum of understanding on Saturday to strengthen relations in the fields of trade, industry, services and investment as well as to increase the private sector's involvement in trade cooperation issues. The government officials said they hope the agreement will contribute to an increase in bilateral commercial ties and investments and pave the way for businesspeople of the two countries.

In her address following the signing ceremony, Pekcan said Turkey attaches importance to the development of the trade relations between the two countries. "We believe that the agreement will contribute to an increase in commercial relations and investments between Turkey and Canada and pave the ways for businesspeople," Pekcan said.

The minister said the two countries had a trade volume of $3.2 billion as of last year, stressing that the figure does not reflect the actual potential of the two countries and that the volume should be further increased. Turkey and Canada are currently carrying out negotiations for a free trade agreement.

Pekcan went on to say that if the countries sign a free trade agreement, it will be an important tool for reaching higher bilateral trade volume and creating a legal basis for trade relations.

She also called on Canadian companies to invest in Turkey, adding that it would be a good idea to combine Turkey's construction capabilities and engineering expertise in Canada in third countries.

The minister also recalled the request to increase national flag carrier Turkish Airlines' flights to Canada, adding that she believes it would help support the relations.

On the other hand, Pekcan stressed that World Trade Organization (WTO) reforms have become a global concern, indicating that they believe in a rule-based trading system.

For his part, Carr stressed the desire to improve trade relations and increase mutual investment between the two countries. Regarding the recent developments in the WTO, Carr said they are committed to a multilateral rule-based trading system and would be pleased to act together.

He also mentioned that Turkey and Canada could cooperate on education.

In her address during a session on the sidelines of the G20 Ministerial Meeting on Trade and Digital Economy yesterday, Pekcan noted it is understandable that policy makers take protectionist measures in response to some short-term challenges. "However, these measures pave the way for increased protectionism that disrupts global supply chains and reduces confidence in the system. Therefore, we must make wise decisions. We cannot sacrifice our future for short-term interests," she added.

Pekcan stated that trade has the role of locomotive for the development of countries, and that trade-restrictive measures and increasing trade tensions create serious threats to the realization of inclusive and sustainable development.

She also said these difficulties will hinder the benefits of trade. "An open, free and rule-based multilateral trading system is a prerequisite for achieving business advantages."

Also, in her speech during the "G20 Dialogue on Current Developments in International Trade" session, Pekcan pointed out that growth of international trade was the most important driving force of economic growth for many countries. However, stressing that unilateral increases in customs duties continue to shape global trade policies, the trade minister said they believe that the G20 offers a valuable platform to discuss policies that contribute to reducing trade tensions.

Pekcan underlined Turkey's commitment to the rule-based multilateral trade system. "We see the WTO reform process as an opportunity to update the WTO to ensure a fairer and more free trade environment where everyone can develop more. We must be prepared to fight for the multilateral system to work for everyone. In this context, we believe that it is very important to ensure that any initiative is carried out in a nondiscriminatory manner and in accordance with the WTO's rules."

In her speech during the "WTO Reform, Latest Developments in Bilateral and Regional Trade Agreements" session, the minister noted that besides the scope of negotiation, the G20 is a platform for political dialogue and that political messages sent by the G20 can accelerate the WTO reform process.

Pekcan said the multilateral trade system based on rules with the WTO being at its center is the most important element for the international trade and that immediate action should be taken to deal with the crisis the WTO is facing. The trade minister stressed that Turkey is a loyal supporter of the multilateral trading system, adding that they see the WTO reform discussions as an important opportunity to strengthen the organization.