Ankara eager to maximize economic ties with Baghdad in all areas 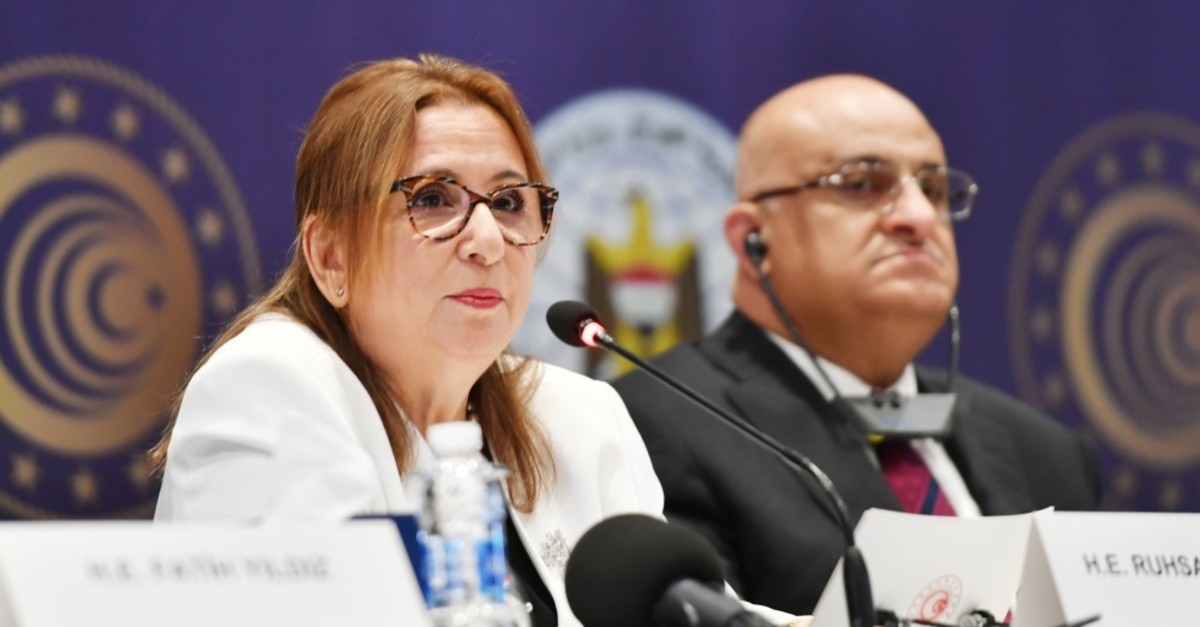 Turkey is poised to maximize relations with Iraq in all areas of the economy and will take the necessary steps to increase mutual investments, Trade Minister Ruhsar Pekcan said yesterday.

"The cooperation between Turkey and Iraq will bring prosperity and peace not only to our people but also to our entire geography," Pekcan said in her address at the opening of the Turkey-Iraq Business Forum.

Accompanied by a large delegation of businesspeople, Pekcan was in Iraq yesterday. She was received by Iraqi President Barham Salih and discussed bilateral issues concerning the two countries.

She emphasized that they were in close cooperation with Iraq's Trade Minister Mohamed Hashim al-Ani to develop bilateral trade, underlining that the two countries' presidents set the goal of achieving a trading volume of $20 billion in this regard. The forum was a firm indicator of the determined resolution put forward at all levels for the development of bilateral trade relations between the two countries, she noted.

"We must eliminate all the difficulties before the trade and bring trade, contracting and investment relations between Turkey and Iraq to the brightest period of history," she continued. "In 2018, our exports to Iraq amounted to $8.3 billion, while our imports reached $4.7 billion. Turkey leads in Iraq's imports. In the first five months of 2019, exports to Iraq increased by 8.4 percent and imports from Iraq surged by 29.6 percent compared to the same period of the previous year. These figures show the importance we attach to increasing mutual trade relations."

Pekcan recalled that in 2018, 11,825 companies exported to Iraq. "Our potential is far above that. To activate this potential, we should take measures to facilitate trade rather than to make trade difficult and protective," she said.

She further said that during the meetings with Iraqi President Salih and Prime Minister Abdul-Mahdi they discussed additional taxes and products covered by the ban, as well as the challenges faced by businesspeople. She said they also asked to amend the requirement to accept only U.S., European and Japanese products in the purchase of machinery within the scope of the Health Ministry, the Oil Ministry and the Electricity Ministry.

TURKEY CONTINUES TO STAND BY IRAQ

Pekcan said Iraq was in the process of development and reconstruction. "Our state will continue to stand by Iraq at all times, as it has during past difficult days," she noted. "As an indication of our strong support for the reconstruction of Iraq, on April 25 we held the Forum for Reconstruction of Iraq in Baghdad in cooperation with the Turkish Contractors Association (TMB) and the Iraqi Contractors Federation. We expect a similar forum in Istanbul. Turkey is ready to provide all kinds of support to boost Iraq's private sector and enhance the production capacity of the country."

The minister earlier said Turkish contracting companies have so far undertaken around 987 projects valued at $25.9 billion in Iraq. Following the defeat of Daesh, Iraq has been facing the task of rebuilding the war-torn country and restoring security. As a neighboring country of Iraq, Turkey has announced that it will provide the necessary support in efforts for reconstruction.

The reconstruction would include war and terror-destroyed cities, ruined roads, buildings, damaged electricity production capacity and distribution networks and much more.

Pekcan also added that Turkish businesspeople and contractors hold a considerable share in the development of the economic prosperity of Iraq and that in addition to four Turkish banks operating in Iraq, Turkish Airlines also has flights to five destinations in Iraq, including Baghdad, Basra, Najaf, Irbil and Sulaymaniyah.

On the other hand, Iraq's trade minister, Mohamed Hashim al-Ani, said the forum was a "historic and important process" that would improve the mutual economic relations between the two countries. "On this occasion, I urge Turkish companies with vast experience to invest in various fields in Iraq," he said, expressing his hope the forum will have a positive effect on support for the private sectors of Iraq and Turkey.

Al-Ani said that this period, when his country ended the fight against terrorism, provided an opportunity for Turkish companies to invest. "Turkish companies have great experience in all areas of investment," he continued. "The Iraqi government has also set out with the vision of supporting the private sector. I call on Turkish companies to invest in various fields and come to our country to develop joint economic projects that serve the interests of the two countries. I invite Turkish businesspeople to sign agreements with Iraq in the fields of agriculture, industry, trade, housing and reconstruction.