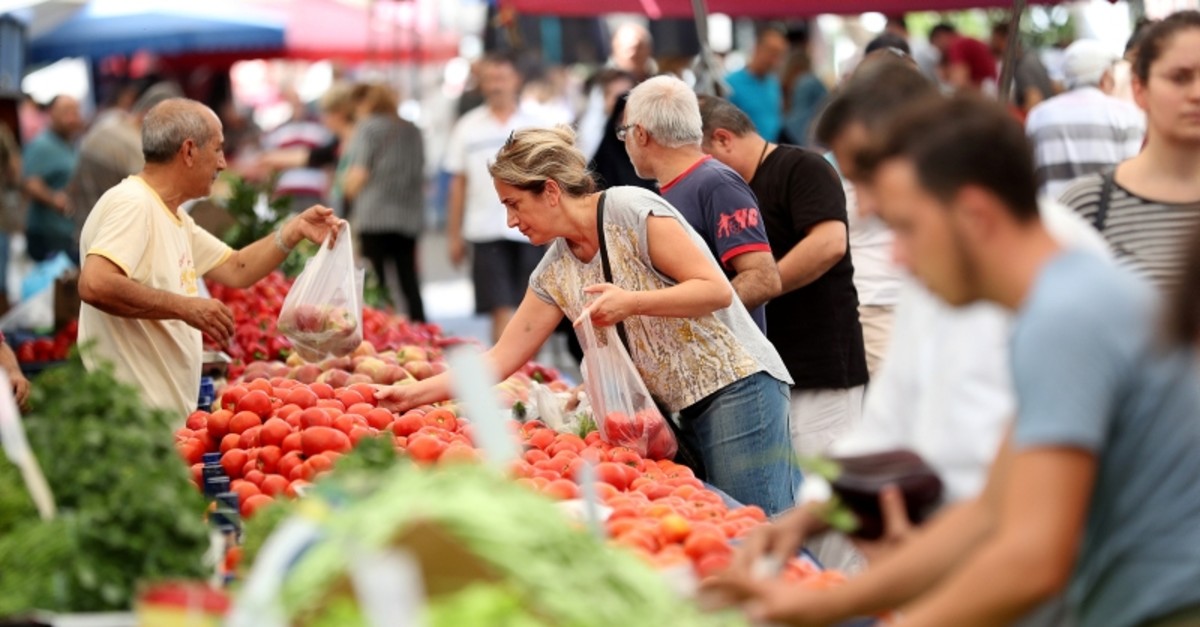 Consumer inflation in Turkey has fallen to its lowest level in a year in June, particularly thanks to a base effect and decline in food prices, thus potentially opening the door for the central bank to start its easing cycle later this month

Maintaining a downward trend, consumer prices in Turkey saw their biggest drop in months in June, giving what is dubbed more room for the country's central bank to cut key rates in the coming period.

The annual inflation increased by 15.72 percent year-on-year last month, a sharp decline compared to 18.71 percent in May, according to the Turkish Statistical Institute (TurkStat).

Commenting on the data on his social media account, Treasury and Finance Minister Berat Albayrak stressed that the downward trend in inflation continues. "We have come below our annual target with June figures. We will protect our gains on the food side, especially with our structural steps, and we will first see single-digit inflation and then close the year below our targets," he noted.

Having followed months of declines in inflation, the June figures represent the lowest rate of inflation since June of last year, when it was 15.39 percent, prior to speculative fluctuations in financial markets that erupted last August, in the aftermath of which Turkish lira lost around 30 percent of its value against the U.S. dollar.

The situation led the Central Bank of the Republic of Turkey (CBRT) to hike its benchmark interest rate to 24 percent. Experts now say the decline in inflation and stronger Turkish lira in recent weeks might lead to the first rate cut since September. The Monetary Policy Committee (MPC) is set to hold its next meeting on July 25.

A group of 15 economists polled by Anadolu Agency (AA) forecast Turkey's annual inflation rate in June would drop to 15.78 percent. On the other hand, the median of 22 forecast in a Bloomberg survey was 16.1 percent. Reuters poll forecast stood at 15.74 percent.

The sharp drop in June inflation was driven by a high base effect and a drop in food prices. The highest monthly decrease was seen in the price of food and non-alcoholic beverages, which dropped by 1.65 percent last month, while that of clothing and footwear declined by 1.57 percent.

"The highest monthly increase was 2.65 percent in hotels, cafes, and restaurants," TurkStat said.

That sector was followed by miscellaneous goods and services with 1.86 percent, education with 1.50 percent and health and furnishing and household equipment with 0.57 percent during the same period.

On the other hand, the highest annual increase was seen in miscellaneous goods and services, up 26.88 percent year-on-year.

"Furnishing and household equipment with 22.51 percent, hotels, cafes and restaurants with 20.84 percent, alcoholic beverages and tobacco with 19.24 percent and food and non-alcoholic beverages with 19.20 percent were the other main groups where high annual increases realized," the statistical body said.

Consumer prices in June increased only 0.03 percent month-on-month, according to TurkStat, while economists expected an increase of 0.08 percent.

The 12-month average hike in consumer prices was 19.88 percent in June.

As laid out in Turkey's new economic program announced last September, this year country's inflation rate target is 15.9 percent, followed by 9.8 percent next year and 6 percent in 2021.

According to an inflation report by the CBRT released in April, year-end annual inflation is expected to hit 14.6 percent in 2019, hovering between 12.1 percent and 17.1 percent.

Pointing to a more-than-expected decrease in June inflation – the fastest deceleration in the CPI index in eight months – U.K.-based multinational bank Standard Chartered noted that similarly, the core index fell to 14.65 percent last month, from 15.87 percent.

"This suggests that the long-awaited base effects have kicked in, which could provide impetus for inflation to continue declining in the coming months," it said in a statement Wednesday.

It also noted much of the improvement was driven by food inflation, which has been persistently high over the past months. Looking ahead, it said, "Key risks to disinflation include higher oil prices, hikes to natural gas prices for electricity companies and the 15 percent electricity hike for households and businesses – both effective from July."

The bank also said it thinks, "Conditions are conductive for the CBRT to kick start its easing cycle with a 100 bps [basis points] cut in July."

"The June CPI print helps pave the way for the Central Bank of the Republic of Turkey (CBRT) to kick start its easing cycle at the July 25 MPC with a 100 bps cut. We have been more cautious than others in our rate cut call – we see a 200 bps cumulative cut in 2019 – given turbulent markets and political noise relating to the March local elections, the Istanbul mayoral re-run and the S-400 anti-missile system deliveries," Standard Chartered noted.

"From an economic standpoint, we think both domestic conditions and the global backdrop (with expected Fed cuts of 50 bps this year) are conducive for a more accommodative monetary policy stance, but timing is key to avoid market turbulence," it said.

'CBRT might start its rate cut process at July meeting'

The favorable base effect in inflation in June was very strong, said Haluk Bürümcekçi, AA Finance Analyst and economist. He particularly noted that a sharp decline in fruit and vegetable prices of over 11 percent was effective in the inflation drop last month, adding that the energy group followed a decline with 1 percent in contrast to last year.

From the aspect of the course in the upcoming period, in addition to the uncertainty and volatility of food prices, according to Bürümcekçi, the outlook of crude oil and other commodity prices, exchange rate movements and public price/tax adjustments will determine the direction of risks on inflation.

On this month's interest rate decision by the CBRT, Bürümcekçi said it has been observed that leaving behind the uncertainty of local elections and the temporary relaxation of the S-400 issue, one of the main reasons for the strained ties between Turkey and the U.S., has led to a partial decline in risk premiums. "Accordingly, it is likely that interest rate cut process will be initiated with a 100 basis point cut at the Monetary Policy Committee meeting on July 25," he said.

At its latest meeting last month, the CBRT left its policy rate – one-week repo auction rate – unchanged at 24 percent as expected and said it will keep its policy stance tight to "reinforce the disinflation process."

The bank will hold four more MCP meetings this year. In 2018, the CBRT held nine MPC meetings, as interest rates climbed from 8 percent to 24 percent over the course of the year.