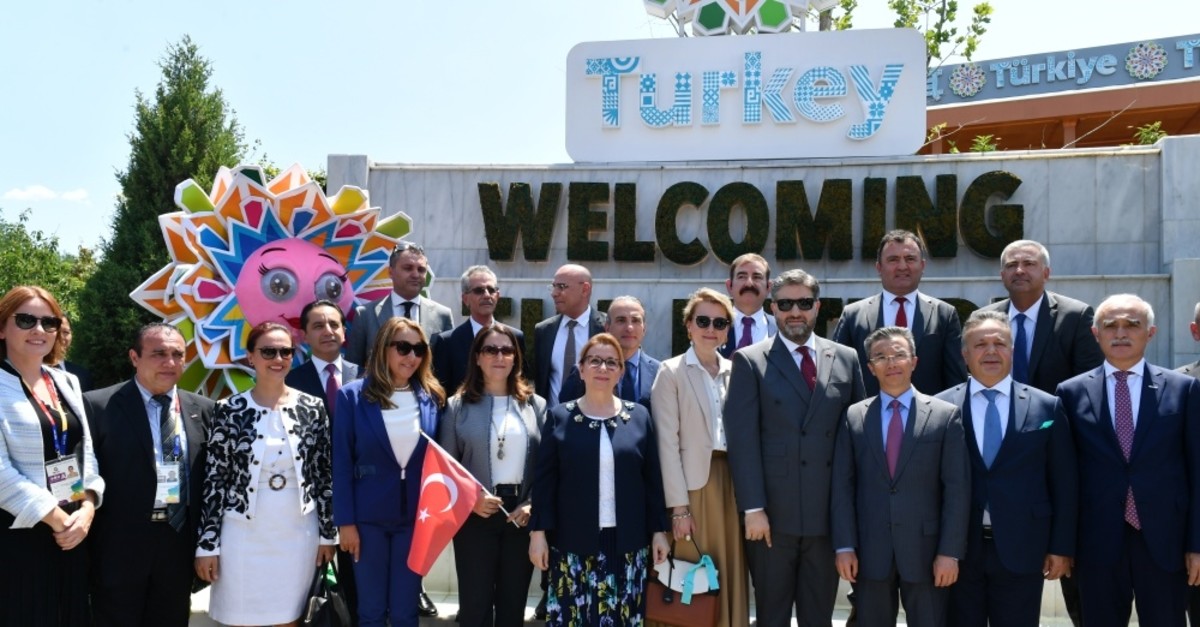 Trade Minister Ruhsar Pekcan and her delegation attend the opening ceremony of Turkey National Day held at the Turkish pavilion at EXPO 2019 Beijing, July 3, 2019.
by Daily Sabah with AA Jul 04, 2019 12:34 am

Turkey's strong presence at Expo 2019 Beijing, which will run until October, aims to boost the country's commercial and economic ties with China to ensure a more balanced trade relation with the Far Eastern country

China has always been one of the top sources of Turkish imports, which is reflected in highly unbalanced Turkey-China bilateral trade. Last year, Turkey purchased $20.7 billion worth of goods from the Far Eastern nation, while Turkish exports to the country only totaled $2.89 billion. In the first five months of the year, Turkey's exports to China were calculated at $1.06 billion, while imports were $7.3 billion. Over the last year, however, Turkey has intensified its efforts to broaden its export footprint in the Chinese market. One of the most concrete steps to this end has been Turkey's participation in the Expo 2019 Beijing with a giant pavilion that exhibits local products.

Coordinated by the Trade Ministry, in cooperation with the Turkish Promotion Group, Turkey National Day was held yesterday at the expo. The main theme was "Embrace the Future with Green."

Trade Minister Ruhsar Pekcan addressed the opening ceremony of the Turkey National Day. She said Expo 2019 Beijing will be an important gateway for Turkey's entry to the Chinese market. "Turkish traders should focus on products they want to sell in the Chinese market, rather than only buying from it," Pekcan said.

The minister noted that Turkey first participated in an international expo during the Ottoman Empire in 1851 when the Great Exhibition, the world's first international fair, was held in London. The ministry, she added, aims to present Turkey's deep-rooted culture and heritage to the world. Within this framework, the ministry regards expos around the world as an opportunity to promote Turkish products and the Turkey brand.

Turkey has a strong presence in Expo 2019 Beijing, which is open until Oct. 7, with a 2,400-square meters pavilion.

The pavilion includes Turkish landmarks from seven regions. The minister expects that Turkey's participation in one of the largest expos in the world will contribute to the country's exports, tourism and economy.

Pekcan also drew attention to the high interest in the Turkish pavilion. She said Chinese officials have accepted Turkey's requests to make the pavilion permanent. "The Turkish pavilion in Expo Beijing will be a monument to improving Turkish-Chinese relations. The expo is a platform where Turkish exporters can directly form a dialogue and relationship with Chinese partners," Pekcan said.

The minister also noted that China is the partner country for the 88th İzmir International Fair, which will be held under the auspices of the Trade Ministry and hosted by the İzmir Metropolitan Municipality on Sept. 6-15.

She said the Chinese business world will attend the fair with a huge delegation. The fair will also organize various business events and forums.

Gülle said the Turkey Promotion Group has made great contributions to the Turkish pavilion. "Turkey's goal is now to boost exports to China," he added.

Önen also noted Turkey's intention to maintain the positive trend in economic and commercial relations with China and that Turkish agricultural products have begun to enter the Chinese market.