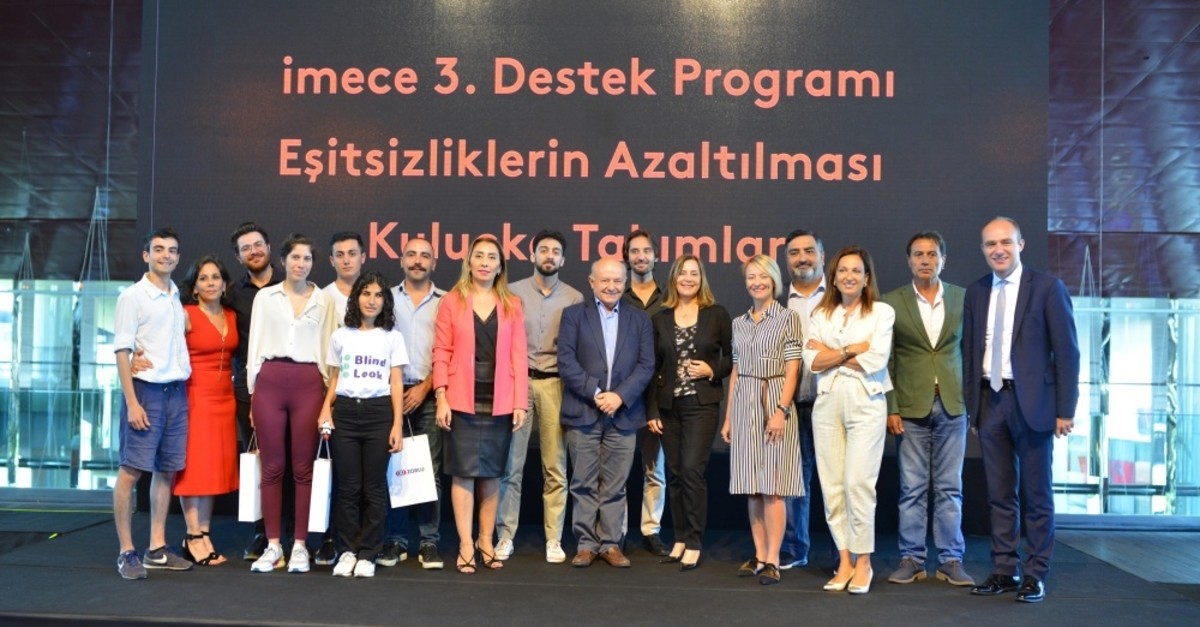 Three teams focusing on innovations for disadvantaged groups, Root (Together), BlindLook and Ecording, have been named the winners of the 3rd Support Program by social innovation program imece.
by Timur Sırt Jul 27, 2019 12:39 am

Having set out to strengthen disadvantaged groups socially and economically to ensure social inclusion and to reduce inequalities in society, imece aims to increase its social impact through the support it provides to social entrepreneurs. Teams have been determined to participate in the incubation program organized in imece's 3rd Support Program with the theme "reduced inequalities" under the main partnership of Zorlu Holding and the strategic partnership of Istanbul Technical University (ITU) Çekirdek.

Three of the teams focusing on problems in the field of reduced inequalities have entered the incubation period. In this context, Root (Together), BlindLook and Ecording teams will have the opportunity to develop their social initiatives and will take advantage of support in various areas, including work space, training, access to ecosystems, corporate collaborations and Zorlu Holding's grant support of TL 60,000.

Speaking at the jury panel discussion held within the scope of the event, Zorlu Holding board member Emre Zorlu said: "Companies should now work not only to make money, but also for the good of the community they are part of. That is why we, as Zorlu Holding, are the founding partner of imece. We want companies, institutions and individuals from different segments of society to come together and work together to find solutions to social issues. What matters most is that we all meet on a common ground. Imece has provided us with such an environment. Here, we talk about problems and look for relevant solutions. We are faced with complex and multidimensional social problems."

"Especially people who focus on non-market issues need to come together and collaborate on platforms such as imece. If we create such ecosystems and come together, we can create value and produce sustainable solutions," ITU ARI Teknokent General Manager and assistant professor Deniz Tunçalp stated.

Children should be unifying rather than being part of polarization and separation. However, there is a need for a common mind to unite them. At this point, Root aims to bind together refugee children with local children by playing games. The platform also develops games allowing refugee children between the ages of 11 and 17 in Turkey and local children to get to know each other better. While there are 3.9 million refugees in Turkey, the number of Syrian children of school age is around 865,000, and the estimated schooling rate for the 2018-19 school year is 65%. Designed in Arabic and Turkish, the game enables children to get to know each other and their cultures better, as well as to integrate, develop empathy, communicate and strengthen their social aspects. Root is working for "reduced inequalities" and "quality education," which are cited among 17 global goals declared by the United Nations for sustainable development.

Having set out with the maxim "Seeing renders you blind," the BlindLook initiative makes restaurants and menus accessible to the visually impaired in Turkey, where eating is an important instrument for socializing. The initiative, led by Sadriye Görece, aims to eliminate disabled individuals' dependence on others while having meals, make them aware of the restaurants around them and by extension to boost their participation in social life. The BlindLook team offers a guide of accessible restaurants, accessible road directions instead of navigation directions that are insufficient to help individuals reach a restaurant, transportation guidance, digitally accessible menus and the opportunity to liberate the ordering process. The platform is working for reduced inequalities and sustainable cities and communities, which are cited among United Nations' sustainable development goals.

It is of great importance to nurture nature through human intelligence in hard-to-reach areas. We have to fix places that have been destroyed by human ambition, using the human mind again. Using a drone, the Ecording initiative throws seed balls prepared by women in rural areas and plants trees in hard-to-reach areas, developing solutions for climate change and for women's employment simultaneously. The number of people exposed to forced displacement soared to 44,000 in 2017 from 10,000 in 2003. It is estimated that the number of people who will be forced to migrate due to climate change will reach 200 million by 2050. Aiming to raise environmental awareness, the initiative develops solutions to climate change and women's employment issues at the same time. Afforestation works carried out with ecoDrone instead of traditional methods reduce the cost of afforestation by providing six times more and 12 times faster seed planting. The initiative is working for "reduced inequalities," "gender equality" and "life on land," which are also among 17 global goals adopted by the U.N. for sustainable development.

As the number of employees increases in institutions, the intelligence of the managers alone is not enough to manage them. While technological solutions are involved, it becomes the main goal to ensure maintaining the right management principles and a sense of justice. Piple, one of the new-era initiatives of Türk Telekom's initiative acceleration program Pilot, is a cloud-based personnel management tool that improves productivity in retail, service, accommodation, restaurant and health sector personnel and optimizing personnel management through artificial intelligence (AI). With Piple, companies can conduct shift management, leave management, task management, performance management, premium and target tracking, recruitment and exit tracking. www.piple.co

With every passing year, more software robots are being used widely in repetitive jobs that waste workers' potential. The ability of software robots to work without errors and without time and space restrictions means that transformation is inevitable. In this transformation, enterprises in the new era that receive support from Pilot, Türk Telekom's initiative acceleration program, can develop different solutions. Among these initiatives, Robomotion is developing a cloud-based software robot solution that enables the automation of repetitive processes on a part-time or full-time basis. Software robots undertake jobs, vulnerable to mistakes, that individual and corporate computer users do repeatedly, enabling users to work more efficiently and focus on high value-added jobs.

Startups.watch founder Serkan Ünsal indicated that there has been a huge increase in the number of AI initiatives in the last few years, continuing: "Both vertical solution providers and solution providers in all industries have increased significantly. In particular, Robotic Process Automation (RPA), visual recognition and processing and text processing areas are the most attention-grabbing areas."

These maps are important in terms of finding reliable resources for the institutions looking for appropriate AI solutions. In order to take part in the map, the initiatives can simply bring their solutions and projects to Startups.watch. It also plans to list all the initiatives on the map with English titles.

55% of social initiatives led by women

The report entitled "State of Social Initiatives in Turkey" defines social initiatives as organizations that have the main objective of creating social or environmental impact, that generate more than half their revenue from commercial activity and that use their revenue surplus or most of their profits for their main purposes.

The report, released as part of the Global Social Initiative Program launched by the British Council in 31 countries in 2009, sheds light on the current scale, scope and future potential of social initiatives. Led by the British Council and TED University Social Innovation Center (İstasyon TEDÜ), the research, subject to the report released in early July, has been conducted by a consortium consisting of TED University, Ashoka Turkey, Istanbul Bilgi University, Koç University Social Impact Forum, Mikado Consulting and the Middle East Technical University since October 2018.

The report disclosed that there are around 9,000 social initiatives in Turkey that work in various areas, particularly in education. Professor Aslıhan Salih, dean of the Faculty of Economics and Administrative Sciences at TED University, assessed the outstanding findings in the report, saying: "The report, which examines the current state of social initiatives in Turkey, shows that social initiatives are concentrated in the three major Turkish cities of Istanbul, Ankara and İzmir. At the same time, it is remarkable that 47.28% of social initiatives have been founded by people under the age of 35, and 55% of them are managed by female leaders, 83.6% of who had higher education. Although women are more dominant in this area, they have lower access to external finance and financial resources than men. Among the main challenges faced are the negative economic climate, high taxes, founding costs and access to finance."

Through findings about the current scale, scope and future potential of social initiatives, the report aims to raise awareness about social initiatives in society, to identify their potential for contribution to Turkey's economic and social development, and to put forward proposals for what can be done to develop this area.

The "State of Social Initiatives in Turkey" report, which is the result of literature surveys, consultation meetings, online surveys, interviews with 37 social initiatives in 12 cities, 12 focus group studies in three cities and two round table meetings, reveals the obstacles for the development of the social initiative area, while also sheds light on opportunities and offers concrete proposals for the development of this area.