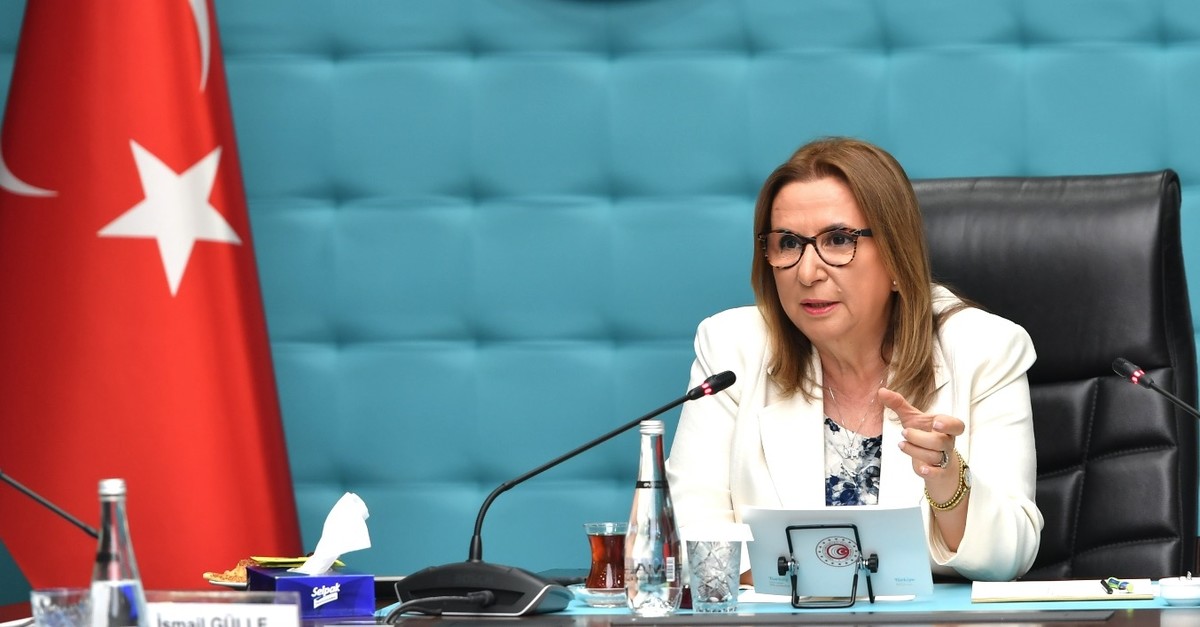 Trade Ministry Ruhsar Pekcan elaborated on the u201cWomen in Tradeu201d project, which aims to increase the role of Turkish businesswomen in exports and ensure their active participation in depeened dialogue with Turkeyu2019s trade partners.
by Daily Sabah with AA Jul 29, 2019 12:11 am

To ensure active participation by Turkish women entrepreneurs in Turkey's export operations and business life, the Trade Ministry has launched projects to pave the way for businesswomen to benefit from support packages and various incentives, Trade Minister Ruhsar Pekcan announced.

The minister said that the Department of Women and Young Entrepreneurs Exports has been established under the ministry's operations to increase the role of women in Turkey's export operations and encourage them to benefit from incentive programs. Thus, the department will act as a bridge between women entrepreneurs and the ministry, Pekcan said.

"As part of our initiatives to support businesswomen, we will bring together Turkish and Spanish women entrepreneurs. We will plan how they could engage in common trade operations via the 'Women in Trade' project," Pekcan said in a statement to Anadolu Agency (AA).

The Turkish Exporters' Assembly (TİM) has only one female board member as opposed to 12 male members, including the chairman. However, in October 2018, to support more women and increase the number of women exporters, TİM established a women's council.

Pekcan noted that Spain is a significant European Union country with which Turkey has strong economic and trade relations. Last year, Turkey's exports to Spain stood at $7.7 billion, with imports of $5.4 billion.

"To invigorate our relations with Spain in new fields, we would like to see our businesswomen more actively involved in this process. Therefore, we will hold meetings bringing together Turkish and Spanish businesswomen. Spain's Trade Ministry and the Department of Women and Young Entrepreneurs Exports will jointly carry out the project," Pekcan said, stressing that the Spanish government consists of 10 women ministers and seven male ministers. Women ministers at the Spanish government oversee finance, economy, trade and industry operations, she added.​

Pekcan also stressed that she discussed signing a protocol for a Joint Economic and Trade Commission (JETCO) at a meeting in the fall.

Trade Minister Pekcan pointed out that the Netherlands is one of Turkey's leading economic partners both in terms of trade and investment, recalling that the trade volume between the two countries rose from $4.6 billion in 2006 to $8.1 billion in 2018.​

Pekcan noted that the Dutch direct investments reached $24.2 billion and that Turkish investments in the Netherlands surpassed $12 billion, stressing the Turkish-Dutch Joint Economic and Trade Commission Meeting (JETCO) constituted the most crucial pillar of commercial relations with the Netherlands. "We will hold the second installment of this meeting and the roundtable meeting in Istanbul in September. We think that new projects should be developed in addition to classical methods to improve our bilateral trade relations with the Netherlands," Minister Pekcan continued. "At this point, major roles fall on our women entrepreneurs. One of the topics of the JETCO meeting with the Netherlands will be to strengthen the cooperation between women entrepreneurs of the two countries. For this reason, a significant number of women entrepreneurs will participate in the meeting, explain their activities, and offer suggestions on cooperation areas."

Meanwhile, Pekcan said that in the JETCO agreement signed with Canada in Japan, they also included an article about women for the first time. "We aim to empower all segments of society, especially women, to create a positive impact on economic growth and contribute to reducing inequality and poverty," she added.​

Pekcan stressed that the issue of women's economic empowerment was included for the first time in a text signed on bilateral trade and economic relations and cooperation. "We will continue to support and enlarge our exports. For this purpose, as the ministry, we will offer our support and guidance to exporters for international women's cooperation," Pekcan said.