Despite pause in July, disinflationary pace to strengthen again in months ahead 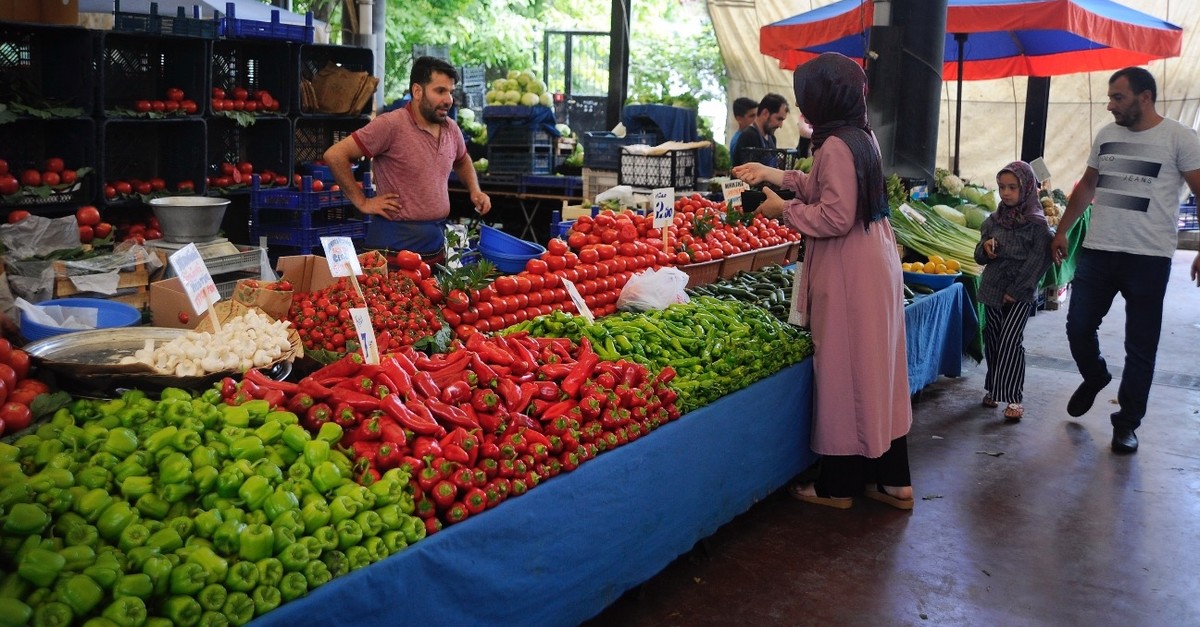 Turkey's inflation last month saw an expected one-off rise, ending a recent downward trend that is projected to resume rapidly in the period ahead, clearing the path to further easing in monetary policy

A fall in consumer prices in Turkey paused in July, briefly disrupting the downward trend that has prevailed since late 2018 and that is expected to strengthen again in the months ahead, paving the way for further interest-rate cuts. Earlier surveys projected annual inflation would increase in July from June, which was at the lowest level in a year; however, the hike came in below expectations. The annual inflation last month saw a 16.65% annual hike, data by Turkish Statistical Institute (TurkStat) showed yesterday, up from 15.72% the previous month. Month-on-month, consumer prices rose 1.36%. Both figures remained below projections. Last week, an Anadolu Agency (AA) survey showed that a group of 12 economists forecast an average annual climb of 16.70% in consumer prices. On the other hand, according to the median of 20 forecasts in a Bloomberg survey, inflation was expected to climb to an annual 16.9% in July.

Based on a Reuters' poll, the median estimate of annual consumer price inflation was 16.9%, while the median forecast for month-on-month inflation rise stood at 1.6%.

The increase was also partly driven by expiring of discounts in the value added and special consumption taxes on white goods, furniture and automotive, which ended June 30. Consumer electricity tariffs also increased 15% as of July 1.

"Furnishing and household equipment with 25.41%; hotels, cafes and restaurants with 19.85%; alcoholic beverages and tobacco with 19.23%; and food and non-alcoholic beverages with 18.21% were the other main groups where high annual increases were realized," TurkStat said.

Inflation to see level of about 10% in the third quarter"

July inflation was helped by an improvement in food prices but was pushed higher by tax cuts ending," said Muammer Kömürcüoğlu, an economist at İş Yatırım. "Transportation, housing and furnishing group posted significant contributions to headline (inflation) due to end of tax incentives," he told Reuters.

On the other hand, Goldman Sachs Group Inc. was cited by Bloomberg as saying, "We expect inflation to decline in August once again and fall significantly in September/October, reaching single digits temporarily on the back of strong base effects, before rising once again."

AA finance analyst and economist Haluk Bürümcekçi said annual inflation is expected to decline to around 10% in the third quarter of the current year due to base effect, before rising again in the last quarter to end the year at around 14%.

He also noted the month-on-month hike came in below expectations of 1.6%, indicating the end in tax cuts and energy price adjustments was what led to the increase in prices.

Bürümcekçi went on to say that a strong monthly drop of over 9% in fruit and vegetable prices in July was effective on the limited increase. Orkun Gödek, a strategist at Deniz Yatırım, also emphasized that they project that annual inflation has a potential to decline to a level of 10% in September-October and maybe even see a single-digit figure. Göked added that they keep their year-end target at 14%-15%.

Kömürcüoğlu also predicts inflation falling to around 9%-10% in the coming months due to base effects, before rising to 14% by year-end.

In June, consumer inflation fell to 15.72%, its lowest level in a year thanks to a drop in food prices and a high so-called base effect, which after the July rise should again bring inflation readings down in August, September and October.

As laid out in Turkey's new economic program announced by the government last September, the country's inflation rate target is 15.9% this year, 9.8% next year and 6.0% in 2021.

The Central Bank of the Republic of Turkey (CBRT) went on to lower its year-end inflation forecast, according to the Inflation Report 2019-III the bank released on July 31, opening a door for further easing in monetary policy in the months ahead. Inflation will end this year at 13.9%, down from 14.6% in its previous report in April, according to the CBRT's case.

The recent decline in inflation opened the way last month for the central bank to begin an expected policy easing cycle.

In a first in over three years, the bank at its Monetary Policy Committee (MPC) meeting cut its benchmark policy rate, the one-week repo rate, by 425 basis points from 24% to 19.75%. The decision marked the highest rate cut since 2002.

Before its meeting last week, the CBRT had not made a change in its interest rates since it made an aggressive rate hike last September following speculative fluctuations that erupted last August.

During a presentation of the bank's quarterly inflation report last Wednesday, new CBRT Governor Murat Uysal suggested that their actual analysis and estimates showed that the bank has "considerable" room to maneuver in monetary policy in the coming months, signaling possible further cuts in the coming period.

On the other hand, Ziad Daoud, a Mideast economist, told Bloomberg Turkish inflation accelerated in July due to the expiration of temporary tax cuts. "Still, the central bank's latest projections could mean 275 basis points of rate cuts over the remainder of this year, with at least a 100-basis-point reduction at the September meeting," he noted.

During his meeting with reporters last Tuesday, Treasury and Finance Minister Berat Albayrak said, "Even though we see a slight increase based on the base effect in July, the process ahead shows that given the strong base effect in August, September and October, this trend is even lower."

The bank expects nearly $2.1 billion of FX liquidity withdrawn from the market as a result of the move.