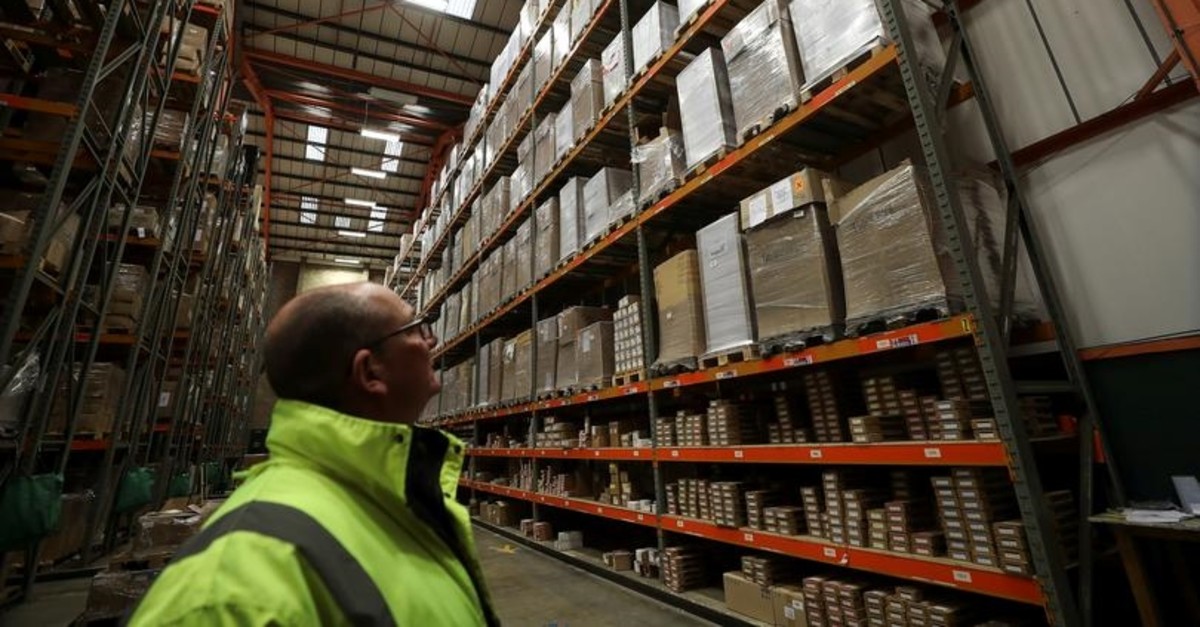 An employee looks up at goods at the Miniclipper Logistics warehouse in Leighton Buzzard, December 3, 2018. (Reuters Photo)
by Associated Press Aug 09, 2019 12:11 pm

The British economy shrank in the second quarter of the year for the first time in six and a half years largely because Brexit uncertainties weighed heavily on business investment, official figures showed Friday.

The decline, the first since the fourth quarter of 2012, was unexpected. Most economists thought that the economy would be flat.

The Office for National Statistics said the contraction came "at a time of increased volatility around the U.K.'s original planned exit date from the European Union in late March."

Brexit was meant to happen on March 29, but has been delayed to the end of October after Parliament rejected the withdrawal agreement that the previous prime minister, Theresa May, had negotiated with the EU. Compelled by Parliament, May requested the extension.

Before the extension request, many firms stockpiled products to help cushion them in case Britain crashed out of the EU on March 29 without a deal. That business activity helped the economy grow by 0.5% in the first quarter. Since then, companies have stopped stockpiling as much, weighing on growth overall.

The disappointing figure is set to raise alarm that Brexit uncertainty is weighing on the British economy more than anticipated. Business investment, which has been historically weak since the country voted in June 2016 to leave the EU, weakened further in the second quarter, contracting by 0.5% following a modest uptick in the first three months of the year.

May's replacement as prime minister, Boris Johnson, has insisted that there will be no further delay to the Brexit date and that Britain will leave the EU on Halloween come what may. That's stoked fears, particularly in currency markets where the pound has been sliding, that Britain will leave the EU without a deal, a development that would see tariffs and other restrictions imposed on traded goods.

With all that uncertainty, the Bank of England warned last week that there's a one-in-three chance that Britain will slip into recession in the early part of 2020 even if a Brexit ends up being smooth.