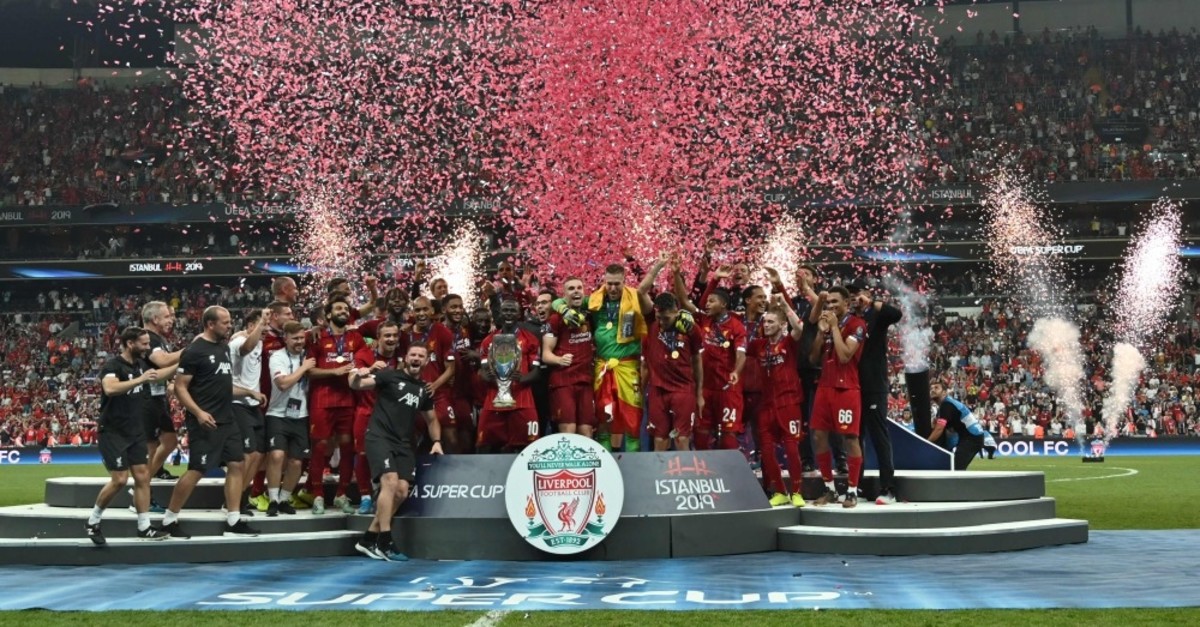 The all-English finale of the UEFA Super Cup brought tens of thousands of fans from across Europe to Istanbul, while millions watched the game on TV. A delight for football lovers, the match was also lucrative business for Turkish tourism professionals, local shopkeepers and ad sellers

Not only British fans but all football aficionados gathered in Istanbul to enjoy a fantastic game of two British giants, Liverpool and Chelsea, for the UEFA Super Cup on Wednesday night, along the shores of the Bosporus. As much as the match was exciting for fans, it also created economic activity for local businesses, tourism professionals and advertisers as they hailed the lucrative earnings from this sports event. The match was broadcast live in nearly 200 countries around the world, including Brazil, Canada, South Africa and Japan, and nearly 2 billion people watched the Super Cup Final on television. Some 38,000 people watched the Super Cup final live at the stadium, while about 50,000 British football fans came to Istanbul for the match.

A unique opportunity for the promotion of Turkey and Istanbul, the UEFA Super Cup final match created over TL 1 billion in advertising value, tourism professionals said.

"The advertising value created by such an international event is very high. The UEFA Super Cup Final, which can be considered a great opportunity for our industry, has created over TL 1 billion in advertising value for our country. Thanks to the match that was followed with interest by football lovers, we had the opportunity to introduce the beauties of Istanbul to the entire world," said Firuz Bağlıkaya, head of the Association of Turkish Travel Agencies (TÜRSAB).

"We hosted British fans who came to Istanbul for the match for three days. With the influence of Liverpool footballer, Egyptian Mohamed Salah, Middle Eastern football fans also took a great interest in the match. European, Asian, Russian and Turkish football fans were among those who watched the match," Bağlıkaya added.

Indicating that football lovers preferred to stay in hotels in Taksim, Beşiktaş and Mecidiyeköy and on the Bosporus, Bağlıkaya said that those who came to watch the match visited Turkey as part of one-night and two-day or two-night and three-day visits. During their stay in Istanbul, they spent time primarily in the historical and touristic sites on the Bosporus and the historical peninsula section, and entertainment venues around Taksim and Beşiktaş. Approximately 50,000 football fans came to Istanbul for three days, making a significant contribution to the city's economy. Pointing out that not only tourism professionals but also tradesmen won, Bağlıkaya said: "After the match, celebrations continued until the morning. Before the match, there was great mobility in the venues around Beşiktaş. We anticipate an economy of about 100 million euros [$110.76 million] in three days."

"Liverpool won the cup, but for us the main winner was our country, especially Istanbul," he said, adding that the final match, watched by the entire world, was a source of pride for Turkish people and Istanbul.

Bağlıkaya highlighted that the yield of such organizations for tourism will be seen in the future, saying: "We think the Super Cup final match will contribute a minimum of 10% to Istanbul's tourism. In 2020, the final match of the Champions League will be played at the Atatürk Olympic Stadium. Due to these two matches being followed with interest by football fans all over the world, Istanbul will be referred to as the city of finals."

"The fact that the stadium was full, and the match was followed by the world media had immeasurable publicity value. As it has always been in such organizations, the positive contributions of this match to Istanbul will be seen in the upcoming days," she stressed.

Beyoğlu Beatification and Protection Association Chairman Nizam Hışım emphasized that it is crucial that such a match was finalized without any incident, continuing: "It was very good advertisement and promotion of Turkey. Even if you spend $1 billion, you cannot get such nice promotion."

Hışım noted that tradesmen, including taxi drivers, restaurant owners, hoteliers and souvenir shops, earned the sterling after a long time.

Hışım expressed that hotel occupancy rates were already high because it was mid-season, however the Super Cup Final led to a rise in hotel prices, with occupancy in hotels in the region being 100%.

Remarking that tradesmen particularly in Beyoğlu and Beşiktaş welcomed their three-day stay, Hışım concluded: "Sales were up 500% in businesses such as restaurants, bars and cafes and doubled in clothing shops and others."

After the game, Liverpool wrote "We love Istanbul" on Twitter, as the Reds won their second European Cup in Istanbul with this victory.

In the May 25, 2005 Champions League final, Liverpool faced Serie A giants Milan to win the top-tier European trophy in Istanbul at Atatürk Olympic Stadium. By the end of the first half, Milan dominated the match 3-0. In the second half, Liverpool scored three goals in an impressive comeback, tying the game. The Reds lifted the Champions League trophy after beating Milan 3-2 on penalties in another historic night for the English club.

Istanbul also hosted the 2009 UEFA Cup final between Ukraine's Shakhtar Donetsk and German club Werder Bremen, with Donetsk capturing the cup in a 2-1 match. In addition, the 2020 UEFA Champions League final will be played in Istanbul at Atatürk Olympic Stadium on May 30.