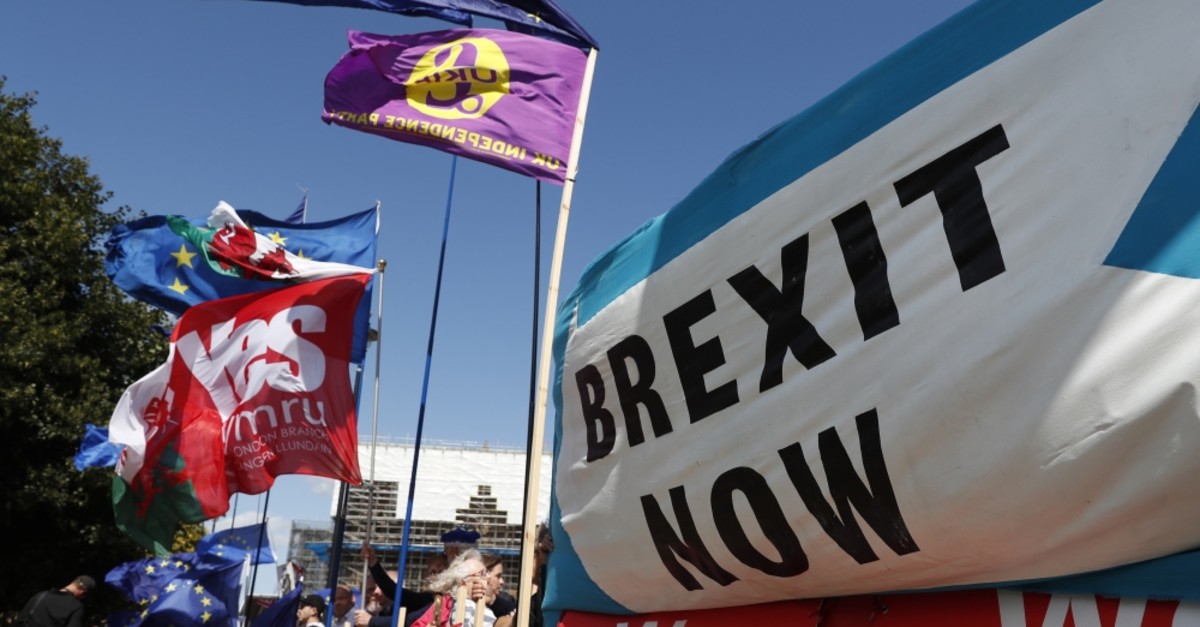 Remain and leave supporters wave flags and hold banners during a demonstration outside the gates of Parliament in London, Sept. 4, 2019.
by Daily Sabah with AA Sep 11, 2019 12:24 am

Turkey's second-largest export destination, the U.K. has been undergoing a protracted process of divorce from the EU. The two significant trade and business partners are looking to maintain and augment relations in the post-Brexit period

The great mystery of Brexit still lingers in the U.K. and for its business partners, including Turkey. However, Turkish and British efforts will continue to maintain, even accelerate, economic and commercial relations in the aftermath of Brexit as officials from the public and private sector are hopeful about the future of ties. Referring to the strong economic relations between Turkey and the U.K., Investment Office head Arda Ermut said: "I believe our relations will continue to get stronger after Brexit. Turkey is acting within the framework of a scenario of strengthening economic and trade relations." Turkey-U.K. Business Council chairman at the Foreign Economic Relations Board (DEİK) Remzi Gür said nearly 3,000 British-owned companies are operating in Turkey and that the U.K. is among the leading investors in Turkey.

According to Gür, the U.K. is Turkey's second-largest export market in terms of the volume of bilateral trade. In that context, Turkey's inclusion in the working groups established by the U.K. during the Brexit process is an output of this partnership.

Pointing out that mutual business and investment opportunities should be evaluated for sustainable relations between the two countries, Gür said: "Turkey is ready to take all political and economic steps on this issue. The two countries have agreed to work jointly in areas such as the defense and space industries. There are construction and infrastructure projects that both countries manage together in line with their common interests in third countries."

Highlighting that it is important for Turkish investors to do more business in the U.K., Gür said: "As the Business Council, we will continue our efforts to boost cooperation. I believe that we can evaluate the opportunities for cooperation and work on many other areas, such as industry, smart cities, agriculture, energy, aviation and nuclear industry."

He emphasized that the economic relations between the two countries should be evaluated from a different perspective in the process of Britain's secession from the EU. "No matter how the circumstances develop, I see great benefit in Britain and Turkey moving forward as two strong partners. Turkey joining as a trade partner in the U.K.'s agreements with other countries would be for the good of both parties."

The U.K., which is one of the 17 target countries cited in Turkey's Export Master Plan, is among the developed countries where Turkey runs a surplus in its foreign trade and continuously increases its exports.

According to the Turkish Statistical Institute (TurkStat), Turkey-U.K. trade volume reached $18.6 billion in 2018, with $11.2 billion in exports and $7.4 billion in imports. Last year, Turkey's exports to the U.K. soared by 15.7% and its imports from the country rose by 13.7%, compared to the previous year.

Automotive and its subsidiary industries, knitted garments and accessories, electrical machinery and devices, boilers, machinery, jewelry, nonwoven clothing and accessories, articles of iron and steel come to the fore in Turkey's exports to the U.K.

On the other hand, the main imports items from the U.K. include boilers, machinery, precious stones, iron and steel, products for the automotive main and subsidiary industries, pharmaceutical products, organic chemicals, optical instruments and medical instruments.

According to the Central Bank of the Republic of Turkey (CBRT), the amount of investments carried out by British firms in Turkey in 2018 amounted to $409 million. The amount of investment made by Turkish companies, which have distribution and sales-oriented representative offices and branches in the U.K., stood at $323 million during this period.

It is noteworthy that investments in Turkey are made in the areas of infrastructure, energy, food and tourism. In addition, the possibility of opening up to Russia, the Caucasus and Central Asian countries via Turkey is seen as a reason for preferring Turkey for British investors.

Previously, Trade Minister Ruhsar Pekcan warned that Turkey would be the most affected after the EU in the event of a possible no-deal Brexit, saying Turkey's loss on trade with the U.K. could be about $3 billion.