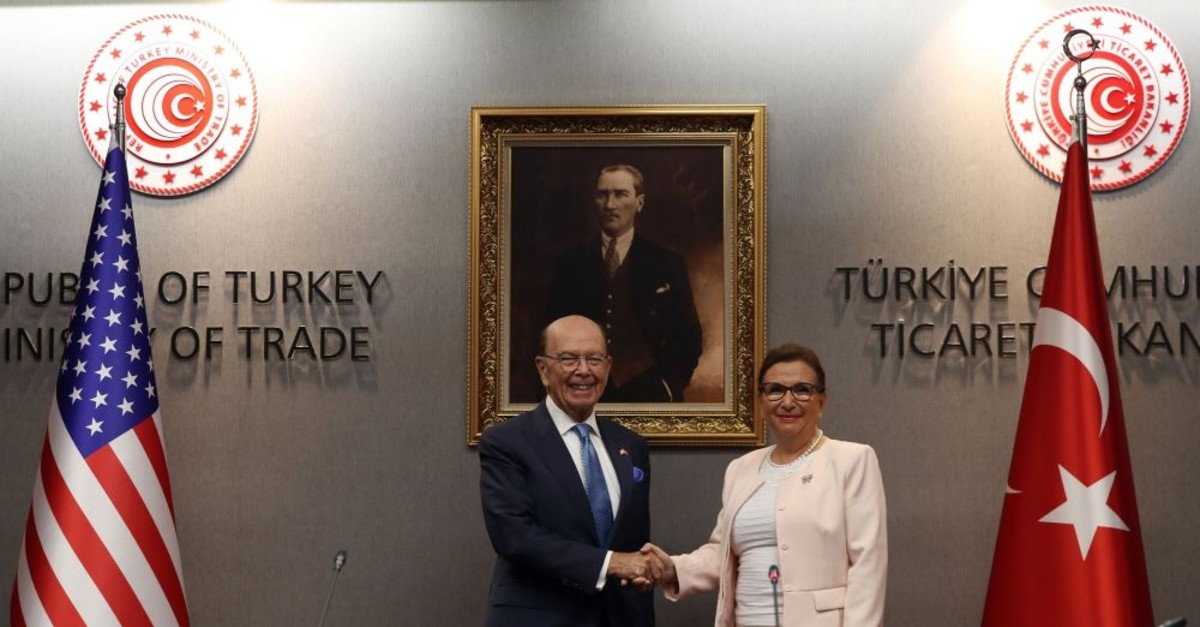 The five-day visit of U.S. Secretary of Commerce Wilbur Ross, during which he met representatives from the Turkish and American business world and Turkish authorities, including President Recep Tayyip Erdoğan, have ramped up efforts to maintain consistent business diplomacy between the two countries as they pledged to reach $100 billion in bilateral trade. While setting up sector-focused commissions to specify the steps on how to increase the bilateral trade volume, both sides have also expressed their intention to launch negotiations for a free trade agreement (FTA). In the midst of negotiations, some promising developments for bilateral commercial ties have also occurred. Some of the Turkish steel exporters, who sent more than 1,000 applications to the U.S. Department of Commerce to get exemptions from steel tariffs, have received positive feedback from American officials.

"The applications we have got from the Turkish steel exporters relied on the fact that their products are not manufactured in the U.S. market and we have approved if their products are qualified enough to cater to the demands of the U.S. market. Around 40% of the Turkish companies have got exemption from steel import tariffs," Ross said in an interview with Turkish broadcaster Habertürk.

In May, U.S. President Donald Trump reduced tariffs on Turkish steel imports from 50% to 25%, citing what he said were necessary import reductions. After Trump doubled tariffs on Turkish steel in August 2018 during a crisis in bilateral relations, Turkey brought the issue to the World Trade Organization (WTO) and won its first appeal against additional U.S. tariffs in December 2018. However, the 25% tariff the U.S. administration imposed on imports from a number of countries are still applicable with few exemptions.

Exemptions and removals of impediments for the enhancement of bilateral trade are welcomed by Turkish officials. During a dinner on Tuesday, Trade Minister Ruhsar Pekcan said that the U.S. and Turkey can overcome all obstacles by working together, adding that the five-day visit of Ross and his delegation Wilbur Ross is very important and shows how seriously the U.S. administration takes these issues. Highlighting that their goal is to reach the $100 billion trade volume target set by President Erdoğan and U.S. President Donald Trump, Pekcan recalled that Turkish and American parties had been working for this purpose since her visit to Washington in April and established a working group in this context.

The bilateral trade volume between Turkey and the U.S. currently stands at $20.6 billion. Turkey's exports to the largest economy in the world were $8.3 billion, while it imports totaled $12.3 billion, according to data from the Turkish Statistical Institute (TurkStat). In the January to July period of this year, the sale of Turkish goods and products to the U.S. was $4.6 billion and U.S. exports to Turkey were $6.6 billion. Indicating that each sector is concentrated on their respective area and compiled a study on the steps to be taken to boost trade with the U.S. Pekcan said, "We have shared this work with Mr. Ross. The reports of the working groups established are consistent with each other. That means we are on the right track." Emphasizing that every sector is important for them, Pekcan said: "There are sectors that the U.S. side is also very interested in. We have chosen some sectors to work together in the first phase. We will continue to share our works with the private sector and take views from them. The work of the sectoral working group will start this month and we are ready."

In his speech, Ross said, "The meeting with President Erdoğan took place in a very open and constructive dialogue. We addressed the structure and complexity of our trade relations. Today, there are 1,700 U.S. companies doing business in Turkey, and these are the best-known brands of the U.S." Pointing out that these U.S. companies and their subsidiaries generated $35.4 billion in revenue last year, which amounts to approximately 3.5% of Turkey's gross domestic product (GDP), Ross added: "These U.S. companies employ 78,000 Turks and their total assets in Turkey are worth $31 billion. So, we can say that they really have long-term investments. U.S. companies are very useful organizations for Turkey. We are here to strengthen the commercial interests of both countries."

Emphasizing that trade relations between the two countries also overcame the ups and downs of the geopolitical alliance, Ross noted that Turkish companies also have direct investments in the U.S. According to the U.S. secretary of commerce, these investments reached a record high last year at $300 million. Turkey is ranked 15th among the countries that have foreign direct investment in the U.S. Sales by Turkish companies in the U.S. have reached a record high of $700 million. "We hope all this continues," he said.

Underscoring that economic success depends on transparency, a predictable judicial system, protection of intellectual property and human rights and reasonable legal framework, Ross continued: "The protection of U.S. companies in this sense is of great importance. It is crucial that U.S. companies cooperate with you in energy, agriculture, tourism and other sectors. I would like to encourage you for such cooperation through a win-win model."

During an address at the dinner, Union of Chamber and Commodity Exchanges of Turkey Chairman Rifat Hisarcıkloğlu also stressed the urgency to launch negotiations for a free-trade agreement between the two countries.

In his evaluation of the meetings with the U.S. delegation, Turkish Exporters' Assembly Chairman İsmail Gülle also emphasized that a promising road map for the enhancement of commercial and economic relations has been drawn up and sector representatives will begin immediately increasing exports to the U.S.

The Turkish and American presidents will discuss commercial and economic ties as well as the road map prepared during Ross' visit in detail at a meeting on the sidelines of U.N. General Assembly meetings on Sept. 25.