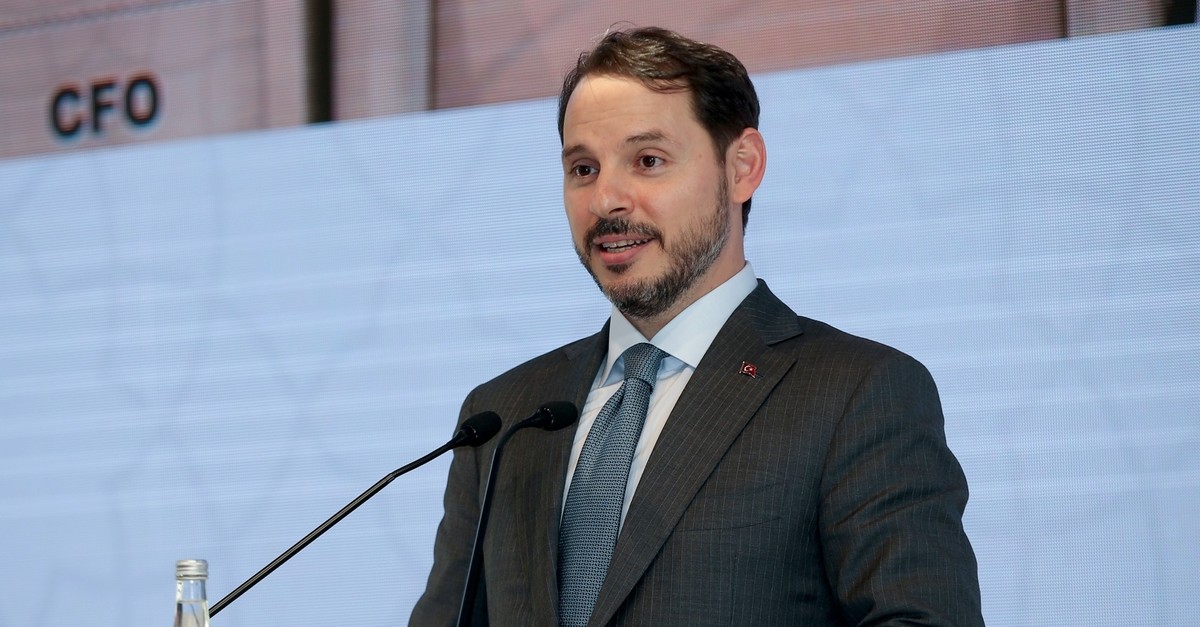 Treasury and Finance Minister Berat Albayrak stressed that the government continues to take all the measures to sustain disinflation and healthy growth of the Turkish economy.
by Daily Sabah Sep 16, 2019 12:06 am

Turkey plans to announce a new policy to boost domestic savings and reduce its reliance on foreign capital, Treasury and Finance Minister Berat Albayrak said in an article he penned for Euronews. "A major policy initiative to boost domestic savings is to be announced. This will lead to long-term growth and reduce reliance on short-term capital flows," Albayrak wrote. Forex deposits and funds, including precious metals of Turkish local individuals and corporates, stood at $188.97 billion at the end of August, down slightly from a record high of $190.51 billion on Aug. 16, central bank data showed. Albayrak added in the column that several investors were interested in forming funds to acquire distressed loans, particularly in the energy and construction sectors. "We are keen to introduce the necessary rules and regulations to extend our support to [the] business environment," he said.

Speaking of new reforms to regulate the financial outlook, Albayrak stated that the ministry is filling so-called information gaps by requiring firms with domestic bank borrowings exceeding TL 100 million to submit audited financial statements to their banks before they obtain loans.

"A national credit rating agency will further improve the information environment and deepen capital markets. Furthermore, there is great potential for growth in the insurance industry to supplement the diversity of funding sources," he added.

The treasury and finance minister also drew attention to the significant reforms implemented over the last year and stressed that the government is committed to an ambitious agenda of economic transformation. "With no elections for the next four years, Turkey offers great investment opportunities," he remarked.

In an elaboration on the concrete outcomes of the steps taken since the announcement of the New Economic Program in September 2018 with a view to ensuring price stability and more sustainable economic growth, the minister underscored that the results of the government's intervention are encouraging. "Inflation is already lower than a year ago, and single-digit inflation is within our grasp by September," he said.

Consumer prices in Turkey went up by 15.01% in August compared to the same month last year, according to the data of the Turkish Statistical Institute (TurkStat). August's figure was down from 16.65% compared to July, beating expectations and was also down from August 2018, when consumer prices were 17.9%.

Inflationary pressures have been a major concern on the Turkish economic agenda for the past year. While the consumer price index peaked in October 2018 with 25.24%, the highest in more than a decade, the gradual decreases have been consistent since then.

In July, the Central Bank of the Republic of Turkey (CBRT) cut its year-end inflation forecast for 2019 to 13.9%, down from 14.6% in its previous report. The rate is expected to fluctuate between 11.5% and 16.3% through the end of this year, the bank's governor Murat Uysal said. The bank kept inflation forecasts constant for next year and 2021 at 8.2% and 5.4%, respectively. The country's inflation rate target is 15.9% this year, 9.8% next year and 6.0% in 2021 under the new economic program announced last September.

The minister emphatically confirmed that the central bank continues to take measures independently to pursue its fight against inflation. "We are working to contain food prices by supporting the optimization of supply chains, with an expectation to reap the benefits of such initiatives this autumn," he reckoned.

Following the central bank's decision to cut the interest rate by 325 basis points on Thursday, Albayrak stressed that interest rates in the market are also demonstrating a downward trend with the continued disinflation and central bank decision. In reference to the campaigns to decrease the interest rates on certain loans announced by public and some private lenders, Albayrak stressed his conviction that the trend will be spreading across the entire market. In another surprising move, the CBRT decreased the benchmark interest rate, the one-week repo rate, by 3.25% to 16.50% on Thursday, a decision that surpassed the median expectation for 275 basis points.

While economic activity has conveyed signs of moderate recovery with continuously surging exports and robust tourism figures, investment demand has been unable to post the desired outcome in a period of economic rebalancing. To prop up investments, the central bank has opted to maintain its rate cut policy again as year-end expectations point to a 15% rate.The minister also said in a tweet late Friday that the economic rebalancing is yielding positive results for the Turkish economy as the current account deficit posted a historic record of surplus on Friday.

Turkey's 12-month rolling current account balance surplus totaled $4.4 billion in July, the highest figures since January 2002, according to CBRT data. On a monthly basis, the current account recorded a $1.2 billion surplus in the same month, improving from a $2.2 billion deficit in July 2018.