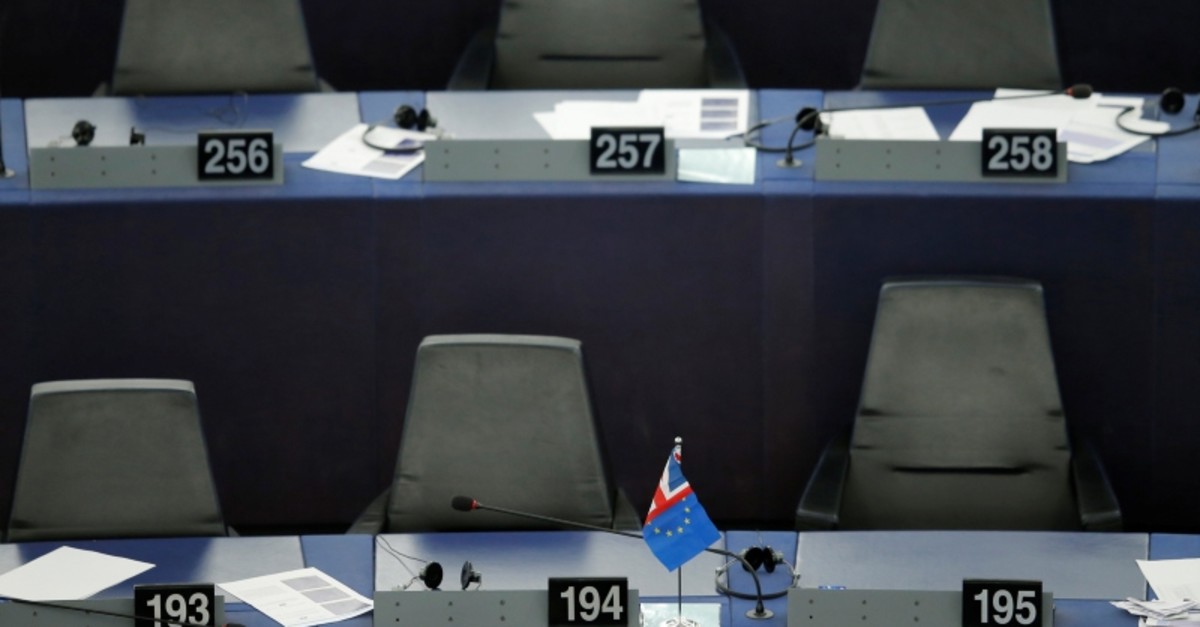 A flag with colors of the British Union Jack flag and the European Union flag is seen after a debate on Brexit at the European Parliament in Strasbourg, France, Sept. 18, 2019 (Reuters Photo)
by Sep 18, 2019 5:37 pm

Britain's tortuous Brexit divorce negotiations may dominate the headlines, but France is more worried about the impact on its economic growth from the slowdown in top trading partner Germany.

France trades three times more with its neighbor across the Rhine than it does with Britain, and French policymakers are growing anxious as their German counterparts dither over how to pull Europe's biggest economy back from the brink of recession.

"We are more concerned about Germany than we are about Brexit. We're a lot more exposed to Germany," a senior French Finance Ministry official told Reuters.

Paris will be looking for - but not hugely hopeful for - signs that Berlin is considering doing more to engineer a recovery when the two countries' economy and finance ministers meet on Thursday in Paris.

"It's important to take preventive action before it gets too late and not to be reacting once a crisis has set in," a second French Finance Ministry source said.

Signs this week that the Netherlands may loosen its purse-strings in its 2020 budget offer some hope.

But the source said the German domestic political situation meant a similar move may be tough for Finance Minister Olaf Scholz as he seeks the leadership of the Social Democrats (SPD).

France has already launched a package of measures this year worth more than 10 billion euros ($11 billion) consisting of tax breaks and bonus schemes for the poorest workers and pensioners.

The measures were mainly aimed at appeasing the "yellow vest" protesters who demonstrated over their falling purchasing power. But the package now looks particularly fortuitous, helping to stave off a downturn as the one Germany has sunk into.

"The Germans have room within EU (fiscal) rules and within their own rules. There's room for fiscal stimulus," Bank of France director general of economics Olivier Garnier said.

So far, France's economy is holding up well despite the German slowdown, with the finance ministry forecasting growth this year of 1.4%, more than double the 0.6% it sees in Germany.

Next year it expects French growth to slow only marginally to 1.3%, but the economy's resilience hangs in part on whether the German economy can achieve the 0.9% expansion the ministry has forecast.

Some French economists take heart from the fact that Germany's slowdown, for now, seems to be concentrated in car production. Nonetheless, it is a sector that big French firms are exposed to, said economist Stephen Colliac with trade credit insurance company Euler Hermes.

For example, French car parts maker Faurecia's biggest client is Volkswagen, accounting for 19% of its sales, while German customers account for 31% of rival Valeo's sales and 29% at engineering firm Akka.

Overall Germany accounts for nearly 15% of its imports and exports, according to data from the French customs office. Britain is its seventh-biggest partner, behind Belgium, and accounts for only 5.2% of its foreign commerce.

The British press has frequently accused Paris of playing hardball in the Brexit negotiations. But that's a position the French can afford themselves in light of the limited economic impact Brexit is expected to have in France.

Apart from some small firms, French businesses are largely prepared for Brexit, according to the Finance Ministry. Exports to Britain even hit a record high in March, just before the first Brexit deadline was pushed back as British firms stockpiled goods in case of future shortages.

Meanwhile, some 50 financial firms previously based in London have relocated to Paris, bringing 2,000 jobs with them, the head of France's central bank, Francois Villeroy de Galhau, told RTL radio on Wednesday.

"In the bad news that is Brexit, there is an opportunity for us."