Business council head calls for new era in ties between Turkey, US 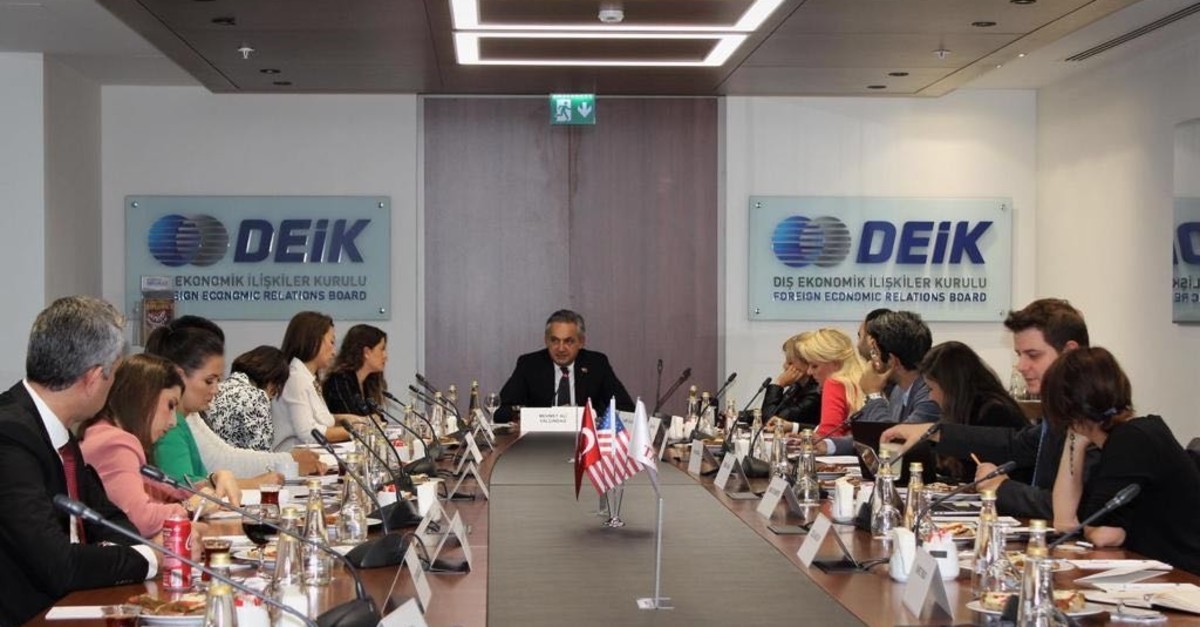 The Turkey-U.S. Business Council (TAİK) yesterday said it believed a new era must begin in relations between the two friendly, allied countries, whose strong ties had recently been tested as they confronted frequent and different scenarios.

“We believe it is time to turn a new page on the scenes of politics, economy and trade,” TAİK Chairman Mehmet Ali Yalçındağ told reporters during a meeting in Istanbul yesterday.

The ties between the two NATO allies have been strained over the last couple of years, primarily because of American support for the PKK offshoot, the People's Protection Units (YPG), in northern Syria, a clear threat to Turkey’s national security.

However, after U.S. President Donald Trump's announcement on Wednesday that Washington had lifted all the sanctions against Turkey over its military operation in northern Syria earlier this month was welcomed by the business world.

Trump said he instructed the U.S. Treasury to lift all sanctions imposed on Turkey following the pause of Operation Peace Spring, which Ankara launched against the YPG in northern Syria.

Following Trump’s announcement, the U.S. Treasury said in a statement that they have officially lifted sanctions, which targeted Turkish ministries, ministers and bilateral trade, on which the leaders of the two countries had agreed on during their G20 meeting in Osaka, Japan in June to increase it from $20 billion to $100 billion, a target that was revised up from $75 billion.

“Bringing the $100 billion trade target back to the table as a natural consequence of the lifting of sanctions is, of course, the most pleasing development for us as the business world," Yalçındağ said. “We will continue our work at full speed after a very short pause. With the leadership of the presidents of the two countries, the guidance of the trade ministers and the support of the relevant business organizations, concrete steps will be taken for a win-win-based trading period,” he added.

Bilateral trade between the two countries stood at $20.6 billion in 2018, according to official data. Turkey’s exports to the largest economy in the world were $8.3 billion, while its imports totaled $12.3 billion, according to data from the Turkish Statistical Institute (TurkStat). Between January and July this year, the sale of Turkish goods and products to the U.S. was $4.6 billion, and U.S. exports to Turkey were $6.6 billion.

The TAİK had undertaken responsibility and coordination within the scope of the $100 billion bilateral trade target and has established three working groups, namely on trade, investment and perception, the TAİK chairman underscored.

“We determined our priority sectors in line with the mutual trade volume of $100 billion as construction materials, apparel, home textiles, furniture, jewelry and automotive. In the coming period, our Trade Working Group is planning to hold meetings with the leaders of the identified sectors and retail companies in the U.S. at their headquarters. The talks will be held with the support of the U.S. Department of Commerce,” he noted.

He emphasized that they are discussing this issue with their stakeholders in the U.S. and working to prepare a road map.

Furthermore, the TAİK chairman suggested that Trump understands Turkey’s strategic importance in the region much better than anyone else, making it clear every time, just as in Osaka.

“Trump never wants to lose its 70-year NATO ally because of an organization inherited from the previous administration and collaborates periodically and tactically, supporting this viewpoint in the steps he takes,” he said.

Ankara’s purchase of the Russian S-400 air defense missile systems caused tension with Washington over the last year as the latter even threatened to impose sanctions. Trump said, however, that he was not considering punishing Turkey.

“Trump is a president who understands Turkey and its concerns. Despite the S-400 purchases, he has stated at every opportunity that he has very good relations with Turkey. And in every statement, he says that Turkey wanted to buy Patriots, but the Obama administration refused to sell them, stressing that Turkey was forced to do so because of the vulnerability of its air defense,” Yalçındağ stressed.

National Defense Minister Hulusi Akar on Wednesday said Turkey expects that disagreements with the United States over the production of F-35 fighter jets will be overcome, while he also noted Ankara could buy the Patriot missile defense system from the U.S.

Yalçındağ noted they believe the two allied states will come to an agreement on Patriot systems after these challenging days, also pointing to the importance of Akar’s statement that the F-35 issue would be solved.

“The relationship between President Recep Tayyip Erdoğan and U.S. President Donald Trump appears to be the most critical balancing factor of the politics between Turkey and the United States. This relationship, based on reciprocal trust, is a great chance for relations between the two countries,” said the TAİK chairman.

He also referred to U.S. Congress, the House of Representatives and the Senate, which had threatened sanctions on Turkey over its recent operation in northern Syria as well as its acquiring of S-400s.

“We need to attach importance to the relations with Congress, meaning the House of Representatives and the Senate. In particular, we must show that there is no point in using threatening language,” said Yalçındağ.

On the other hand, Turkish public lender Halkbank was criminally charged with participating in a multibillion-dollar scheme to evade U.S. sanctions against Iran in an indictment last week, while the Turkish bank denied any wrongdoing.

The move also came amid U.S. pressure on Ankara over its Operation Peace Spring in northeastern Syria. The U.S. move has been construed as highly political and raised concerns due to its timing.

Yalçindağ emphasized that the issue of Halkbank also needs to be concluded. “Like the Sword of Damocles, we do not believe it is right to use it as a threat for every issue. The said case is an upsetting sign of the independence of the American judiciary in terms of its timing,” he added.

“This process has shown once again how vital it is to conduct lobbying activities in the U.S., especially before Congress. As TAİK, we will play a much more positive role in the coming period. By taking the mission we have undertaken in the commercial diplomacy between Turkey and the U.S. one step further, we will pursue a strong communicative strategy in a broad perspective from the media to nongovernmental organizations and from think-tanks to public authorities,” he noted.

Yalçındağ underscored that they will implement a multifaceted communication model that provides a thorough understanding of all the facts about Turkey, is continuous and informs all of the target audiences instantly. “We see that much of the perception of Turkey in the eyes of the United States is caused by ignorance rather than prejudice. As TAİK, we aim to change this perception, break prejudices and move the process to a positive point,” he concluded.