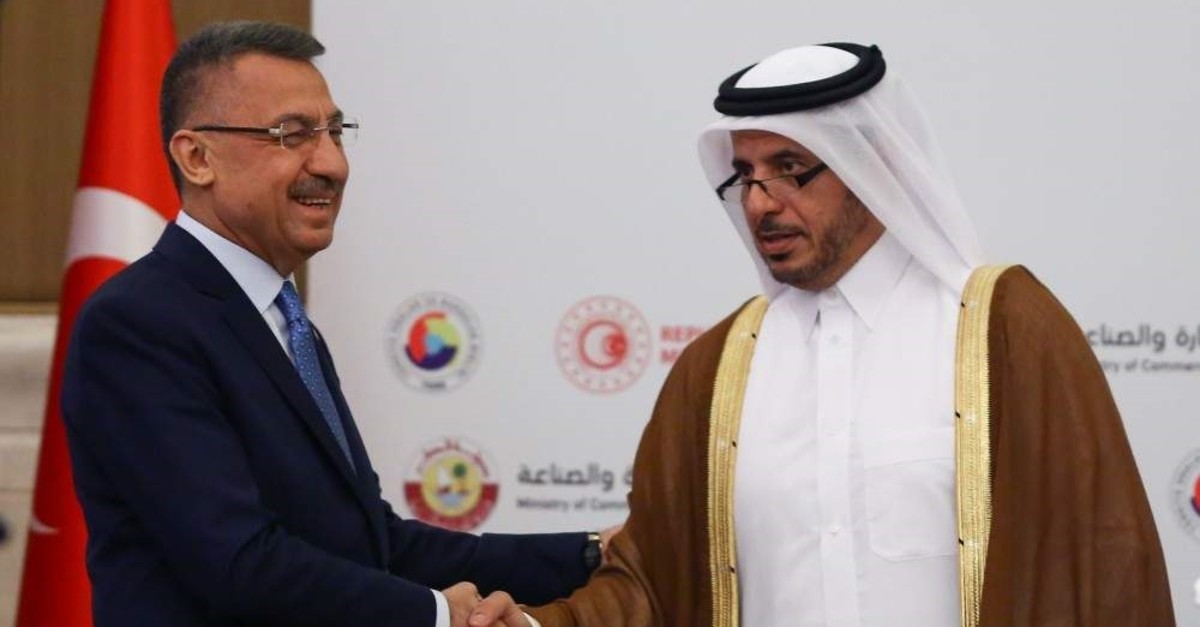 Enjoying strong bilateral ties based on economic, political and military cooperation, Turkey and Doha continue to aim higher to reap the benefits of their expanding multidimensional partnership

Proving the adage that a friend in need is a friend indeed, Turkey and Qatar have developed strong mutual ties in the political, economic and military fields. At a business forum held in Ankara on Friday, the two sides seized upon the opportunity to reiterate their commitment to expanding cooperation through increased levels of trade and investment.

The volume of bilateral trade between Turkey and Qatar has increased by 84% over the last decade, last year totaling $1.3 billion, according to the data of the Turkish Statistical Institute (TurkStat). In the first nine months of this year, Turkish exports were recorded at $838 million, while imports from the Gulf nation came to $205 million.

“Considering the depth of links between our countries, the current trade figures remain well below their real potential,” stated Vice President Fuat Oktay at the Turkey-Qatar Business Forum, which convened on Friday.

Citing the strength of the Turkish economy, Oktay emphasized that Turkish exports continued to rise with every passing month, while the country had jumped 10 places to rank 33rd of the 190 nations featured on the World Bank's Ease of Doing Business Index, announced last week. He noted that the government had taken widespread measures to facilitate the business environment for businesspeople, as well as local and foreign investors, by digitalizing most of the bureaucratic processes.

Oktay also highlighted the 2022 FIFA World Cup Security Cooperation Agreement signed between the two countries as a concrete example of their solidarity. He remarked that Turkish businesses could offer smart city systems and cyber-defense solutions for the 2022 World Cup, since infrastructure would be pivotal for the hosting of international tournaments.

During his visit to the Turkish capital in August last year, Qatar’s Emir Sheikh Tamim bin Hamad Al Thani announced that his country would make a direct investment of $15 billion to Turkey.

Oktay stressed that the steps which would be taken within the scope of this investment decision would increase on the occasion of the business forum. The vice president also noted that they would be ready to do whatever it takes to pave the way for businesses and to provide investors with ease in their dealings, stating that during their meetings, Qatari Prime Minister Abdullah bin Nasser bin Khalifa Al Thani and his delegation expressed the same intentions and goals.

“The bureaucratic burden and additional costs that our exporters face in any field, such as milk and dairy products, will be lifted. We will also be monitoring closely to ensure that the Trade and Economic Partnership Agreement signed in Istanbul last year enters into force as soon as possible,” said Oktay.

For her part, Trade Minister Ruhsar Pekcan said the total amount of Qatari investments in Turkey had reached $6.3 billion. Referring to Qatar’s decision to invest $15 billion in Turkey last year, she emphasized that Turkish partners would be more than ready to share in various strategic investment projects.

“Turkish contractors have completed some world-class projects across the world and have been contracted 146 projects worth some $17 billion in Qatar so far,” Pekcan stated. The minister recalled the Economic and Trade Cooperation Agreement signed last year, indicating that the Turkish side would ensure the deal took immediate effect.

Meanwhile, Qatari Prime Minister Al Thani praised the close ties enjoyed between his country and Turkey. “Our common ground is to always create the necessary infrastructure for the further strengthening of our bilateral economic and commercial relations, paving the way for further opportunities for cooperation,” he stated.

Within this scope, he suggested that the two countries could open up to potential markets by joining forces on new opportunities, adding that the bilateral economic and commercial relations would be propelled to a new level thanks to the latest set of agreements.

The prime minister claimed that Qatar would continue on its path of cooperation to ensure sustainable development within the scope of the Qatar National Vision 2030, which sets out to transform the country into one capable of sustaining its own development and providing for a higher standard of living for its population.

“Our hope is to move forward with our brother nation, Turkey, to ensure our development. We desire to move forward within the framework of our common interests,” he said.
Qatar’s Trade and Industry Minister Ali bin Ahmed Al Kuwari, also speaking at the forum, stressed that Turkish companies would contribute directly to the economy of Qatar.

He explained that existing agreements between the two countries would serve as an engine powering their further economic and commercial relations, underlining the close links already forged.