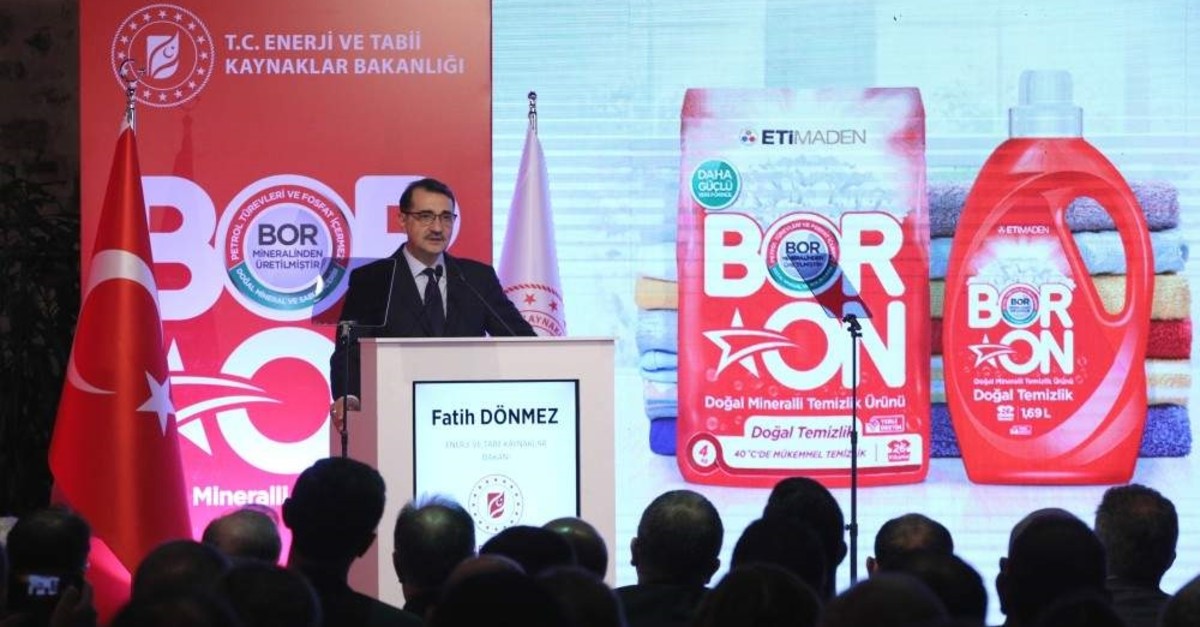 "Four different boron-based detergent products will hit the shelves as of today," Dönmez said during the launching ceremony of the BORON brand of liquid and powder detergents, held at Istanbul's Dolmabahçe Palace.

At the program, the minister said BORON has played a leading role in the spread of natural mineral cleaning products. The product was developed by the public mining works company Eti Maden that operates Turkey’s boron reserves.

The minister said Eti Maden has continuously improved the domestic cleaning product through research and development efforts and customer feedback. “BORON's launch about 10 months ago was welcomed by the entire country. As of today, four different types of BORON, liquid and powder for color and white laundry, will be available.”

Dönmez said there are no additives, such as petroleum derivatives or phosphate, in BORON that are harmful to humans, nature or the environment.

He pointed out that the cleaning products market in Turkey has reached a volume of about TL 10 billion. “BORON has claimed around 8% of that market in a short period of 10 months in a highly qualified market. We have reached a total sales figure of 30,000 tons. By the end of the year, we aim to reach 32,000 tons.” The sales volume in the 10 months crossed TL 100 million.

In order to claim a bigger share of the market, the aim is to reach 20,000 sales points with all major chain stores across Turkey. “We are revising all our preparations in line with this goal. Our factory in Kırka, Eskişehir has increased its capacity by 20% to 25% to keep up with the increasing demand and increased its production level to 30,000-35,000 tons per year,” Dönmez added.

Dönmez said BORON will be exported to the U.S., Switzerland, Tunisia and Kosovo in the first stage. “We are about to make the first shipment. They have the necessary permissions,” he added.

Emphasizing that the R&D process is also underway, the minister said there are ongoing works to develop a natural mineral dish cleaning product for dishwashers and a hand wash. They are expected to be released in the first quarter of next year.

Turkey will be responsible for at least 8% of the world’s total boron carbide production at a new boron carbide facility in Bandırma, Balıkesir, the minister said. The tender process for the production of ferroboron and boron nitride are also underway, he added.

“We are taking steps for the production of value-added boron-based products in our country,” the minister concluded.