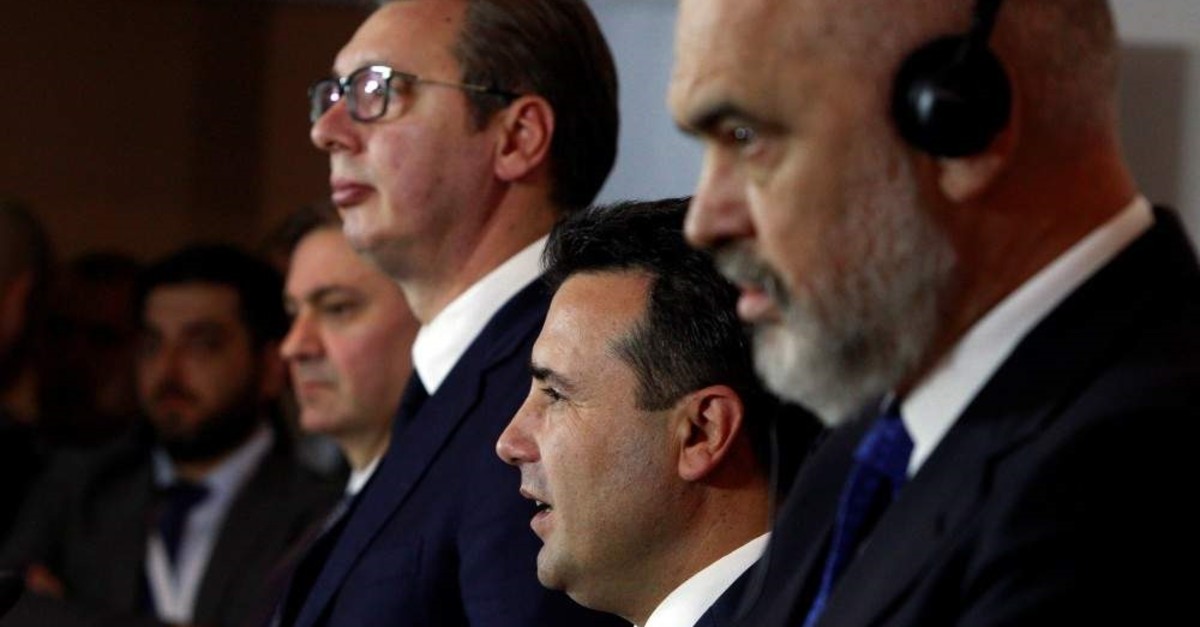 North Macedonia's Prime Minister Zoran Zaev, Albania's Prime Minister Edi Rama and Serbia's President Aleksandar Vucic attend a news conference during trilateral meeting in Ohrid, North Macedonia November 10, 2019. (REUTERS Photo)
by Nov 10, 2019 6:49 pm
Albania, North Macedonia and Serbia discussed setting up a common market at a summit Sunday, weeks after the European Union snubbed bids by Skopje and Tirana to open membership talks.
The leaders of the three countries met at Lake Ohrid, in North Macedonia, after the EU last month refused to start membership talks with Albania and North Macedonia.
Albanian Prime Minister Edi Rama, his North Macedonian counterpart Zoran Zaev and Serbian President Aleksandar Vucic, who launched the common market initiative in October, attended Sunday's meeting.
"We should not be afraid of our own shadow and to do something for ourselves," Vucic told reporters.
"We did not invent anything better for the past 30 years in the Balkans."
"We all want to be part of EU," but "it depends on them," he added. Serbia opened membership talks with the bloc in 2014.
This new initiative is aimed at establishing the free movement of goods and people by 2021 in the divided region.
Bosnia, Montenegro and Kosovo have also been invited to take part in the project.
But while Bosnia and Montenegro sent representatives to Sunday's meeting, Kosovo was absent.
"The vision of Kosovo is its accession to EU and NATO" which cannot be replaced by "any other regional initiative", Kosovo President Hashim Thaci said in a message posted on social media.
"This initiative makes no sense as long as Serbia and Bosnia do not recognise Kosovo independence."
Serbia's former ethnic Albanian-majority province proclaimed independence in 2008, but Belgrade has still not recognised it. Nor does Bosnia, due to the opposition of Bosnian Serbs.
The issue remains extremely sensitive in the Balkans region, which was torn apart in a series of wars in the 1990s that accompanied the collapse of Yugoslavia.
Rama voiced regret over Pristina's stance over the initiative.
"It is also in the interest of Kosovo, its citizens and market that the border between Kosovo and Serbia be abolished" despite the unresolved dispute between the two countries, he said.
The three leaders present agreed on introducing a common work permit and allowing travel between the three countries with an ID card only.
They also discussed setting up a "mini Schengen" visa-free zone to facilitate free movement of foreign visitors within the three countries.
And they agreed to ease customs procedures and border controls to accelerate the passage of trucks.
Albania, Bosnia, Kosovo, Montenegro, North Macedonia and Serbia have a combined population of nearly 20 million people.
France led last month's opposition to the EU membership talks for Albania and North Macedonia, although Denmark and the Netherlands also expressed reservations.
Albania will host the next meeting of the Balkans initiative on December 21.
Last Update: Dec 20, 2019 1:35 am
RELATED TOPICS