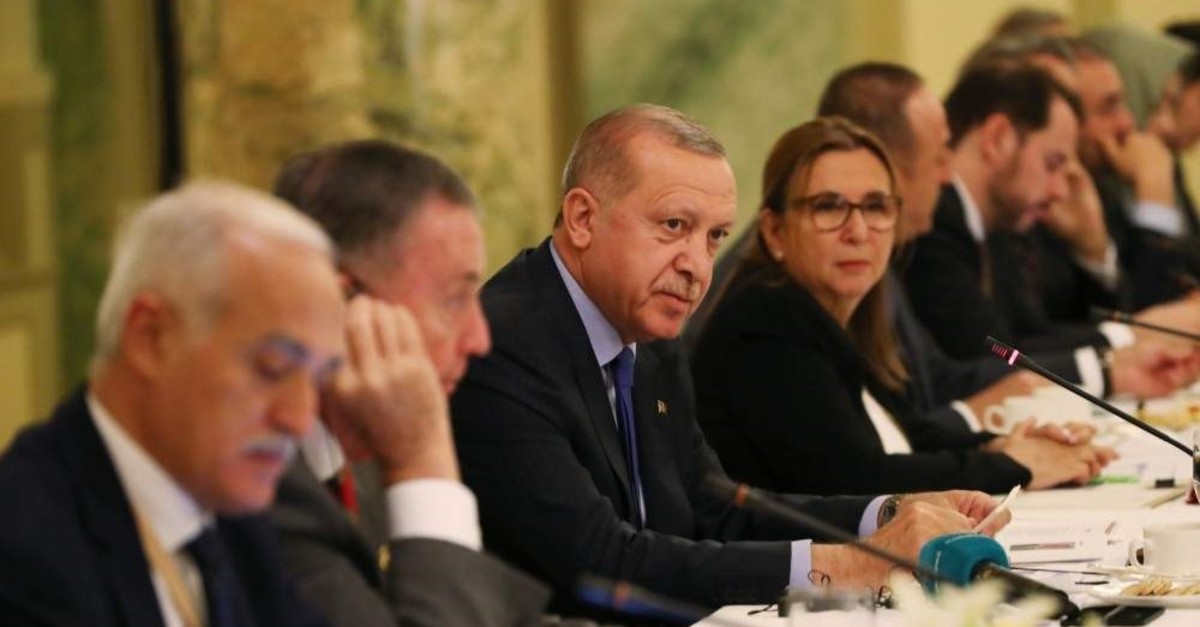 Despite the recently strained relations between Turkey and the U.S., the two allies have strived to keep dialogue open on every front and remain committed to reaching their bilateral trade goals, an initiative spearheaded by the Turkish and American presidents

Having previously agreed on raising the bilateral trade volume to $100 billion from its current level of $21 billion in a balanced fashion, Turkey and the U.S. continue to maintain dialogue and engage in business diplomacy to expand commercial ties and boost bilateral investments.
Prior to his meeting with U.S. President Donald Trump in Washington D.C., President Recep Tayyip Erdoğan came together with the leading names of the American business world on Tuesday evening. Although the primary focus of the visit is cooperation in Syria and the developments in the war-torn country, the two allies will be discussing other issues, including ways to give momentum to trade, Turkey’s participation in the F-35 joint strike fighter jet program and its purchase of the Russian-made S-400 surface-to-air missile system.
In his address at the roundtable meeting organized by the Foreign Economic Relations Board (DEİK) and U.S. Chamber of Commerce, Erdoğan stressed the significance of the current period which is pregnant with a number of far-reaching developments. “Some of the circles here fail to comprehend the importance of the rapport with a strategic ally. I believe that we will solve the problems thanks to the sincere communication we have jointly established with President Trump,” he said.
Recalling that Turkey and the U.S. have designated five prioritized sectors to accomplish the $100 billion bilateral trade target, Erdoğan said that enhancing trade ties will be one of the topics of a bilateral meeting with Trump. He expressed that Turkey expects the removal of the hurdles blocking the development of bilateral trade and the elimination of certain restrictions in the trade of identified goods.
The president emphatically stressed that economic threats because of the political tensions in bilateral relations are not a righteous way of maintaining dialogue. He remarked that the steps taken to poison Turkey-U.S. relations should be prevented. Erdoğan also indicated that the foreign direct investment (FDI) to Turkey this year recorded an increase of 13% and reached $13 billion. The U.S. is in the top six investors in Turkey, he added, and called upon American investors to benefit more from the incentives the country provides for businesspeople. He explained how Turkey ensures a business-friendly environment for local and foreign investors.
Turkey has managed to greatly improve its position in this year's ranking of countries in ease of doing business, a success that has emerged as a result of intense efforts by the government over recent years. The country has jumped up 10 places to be 33rd among 190 nations in the World Bank's Ease of Doing Business Index released in late October.
Over the last 15 years, Turkey has jumped 60 places in the index, boosted by the efforts of the economic administration, multiple amendments and regulations and reforms have led to an improvement in the business environment in the country, leading it to jump in the rankings.
In his address at the meeting, Turkey-U.S. Business Council Honorary Chairman Jim Jones underscored the significance of the $100 billion target.
Treasury and Finance Minister Berat Albayrak, Foreign Minister Mevlüt Çavuşoğlu, Trade Minister Ruhsar Pekcan, Defense Minister Hulusi Akar, DEİK Chairman Nail Olpak, Turkey-U.S. Business Council Chairman Mehmet Ali Yalçındağ and Turkish businesspeople attended the meeting. Senior executives from American firms that have investments in Turkey, including Coca-Cola, Pepsi, UPS, Uber, Hilton, Citi, Nasdaq, GE, Cisco, Honeywell, Google and Cargill. Moreover, Patriot manufacturer Raytheon President Chris Davis and F-35 manufacturer Lockheed Martin Vice President Nancy Ziuzin Schlegel were also present at the meeting.
Bilateral trade
In the period of January to September, Turkey’s exports to the U.S. totaled $6 billion while its imports were calculated at $8.5 billion, according to the data of the Turkish Statistical Institute (TurkStat).
Over 1,800 American companies operate in Turkey in a wide range of fields, including technology, food industry, health and IT. Investments of these firms in Turkey exceeds $50 billion and Turkey saw around $12 billion of foreign direct investment coming from the U.S. in the last 17 years. The investments of Turkish companies in the U.S. have approached $5 billion.
During U.S. Secretary of Commerce Wilbur Ross’ visit to Turkey in September, Turkish and American officials prioritized various sectors such as textile, furniture, marble, automotive, civil aviation, cement and chemicals to increase bilateral trade volume. The two sides decided to set up sectoral committees under the chairmanship of both countries' trade ministries. The committees will bring Turkish and American business circles together and will lead to results-oriented projects to achieve the trade goal.
Last Update: Dec 20, 2019 1:40 am
RELATED TOPICS