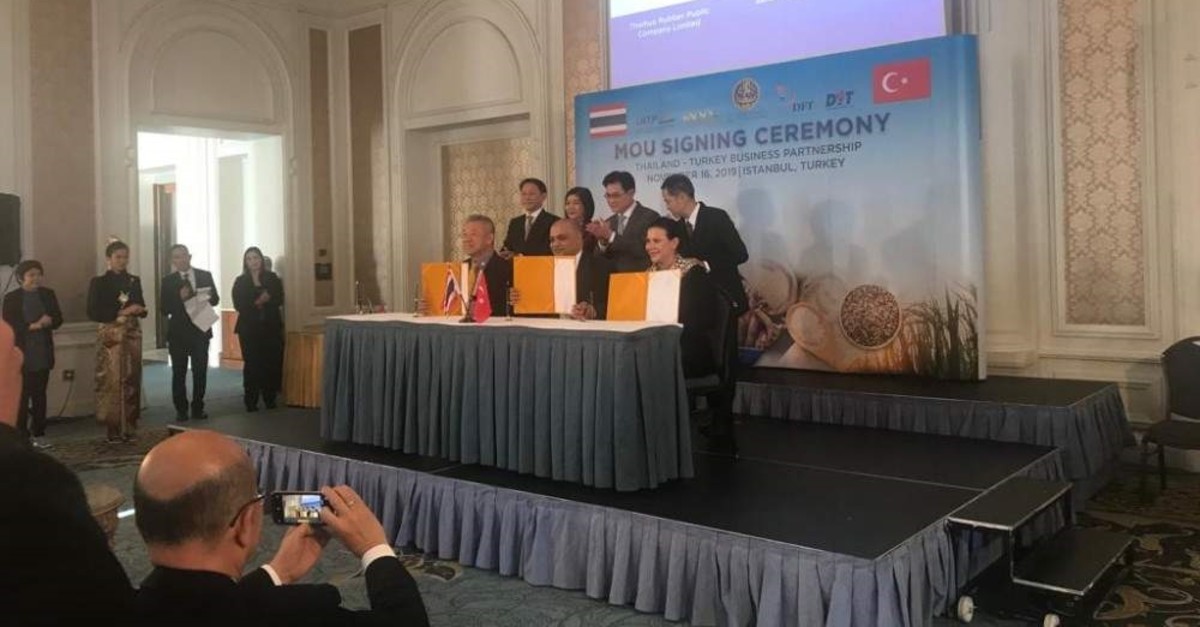 Turkish and Thai officials attend the signing ceremony for the memorandums of understanding between companies from each nation, Istanbul, Nov. 16, 2019.
by Mustafa Kırıkçıoğlu Nov 18, 2019 7:01 pm

Turkish and Thai companies recently signed 11 deals with the potential to add $450 million to bilateral trade between the two nations, who are expected to ink a free trade agreement next year

Recent memorandums of understanding between Turkish and Thai companies will further the enhance economic ties of the two countries, Ambassador to Turkey of the Kingdom of Thailand Phantipha Iamsudha Ekahorit told Daily Sabah, adding that the two economies have the potential for more cooperation.
“Although some Thai and Turkish companies may already be doing business, this visit to Turkey of the deputy prime minister and minister of commerce of Thailand will undoubtedly enhance these relations further. The visit also enables the private sectors of the two countries to learn more about the latest opportunities and each other's potential, while highlighting the similarities of the two economies for win-win relations,” Ekahorit said.
With the participation of officials and businesspeople from the two countries, 11 memorandums with a $450 million trade volume potential were signed between Turkish and Thai companies Saturday in a ceremony in Istanbul, which included representatives from the sectors of rubber, rubber-made materials, rice, cassava, tuna fish and food.
The Thai ambassador added that the “successful” visit paves the way for the Turkey-Thailand Free Trade Agreement (FTA), “which will be of significance in further promoting and strengthening the economic ties for the mutual benefit of the two countries.”
Turkey and Thailand are in negotiations for an FTA to increase economic cooperation. In August, Turkey's Ambassador to Thailand Evren Dağdelen Akgün said the negotiations between Ankara and Bangkok on the issue are progressing, adding that the bilateral trade volume is projected to increase by 40% with the FTA.
Speaking at the ceremony, Jurin Laksanawisit, Thailand’s deputy prime minister and commerce minister, said Turkey is a very significant market worldwide with its 80 million national population and with the 40 million annual tourists it hosts and also pointed out its location on the juncture of trade routes. He added that Bangkok will continue its close diplomatic cooperation with Ankara.
Along with Ekahorit and Laksanawisit, the ceremony was also attended by Honorary Trade Adviser of Thailand’s Ministry of Commerce Cemil Çakar and Thailand’s Minister Counselor (Commercial) Poonsak Khunudom.
In 2018, bilateral trade stood at $1.6 billion, Thailand's exports to Turkey were nearly $1.4 billion, and Turkey's exports to Thailand remained at $278 million, according to data from the Turkish Statistical Institute (TurkStat). In the period of January to September last year, Turkey’s imports from Thailand amounted to $800 million, while exports to the Asian country totaled $191 million.
The two countries aim to increase their trade volume to $2 billion by 2022. Also, to support the relationships among small enterprises, an action plan between Turkey’s Small and Medium Enterprises Development Organization (KOSGEB) and Thailand’s Office of Small and Medium Enterprise Promotion (OSMEP) was developed.
Laksanawisit also stressed that the agreement is a concrete step strengthening the economic relations between Ankara and Bangkok and for increasing the interaction between businesspeople from the two countries.
Last Update: Dec 20, 2019 1:46 am
RELATED TOPICS