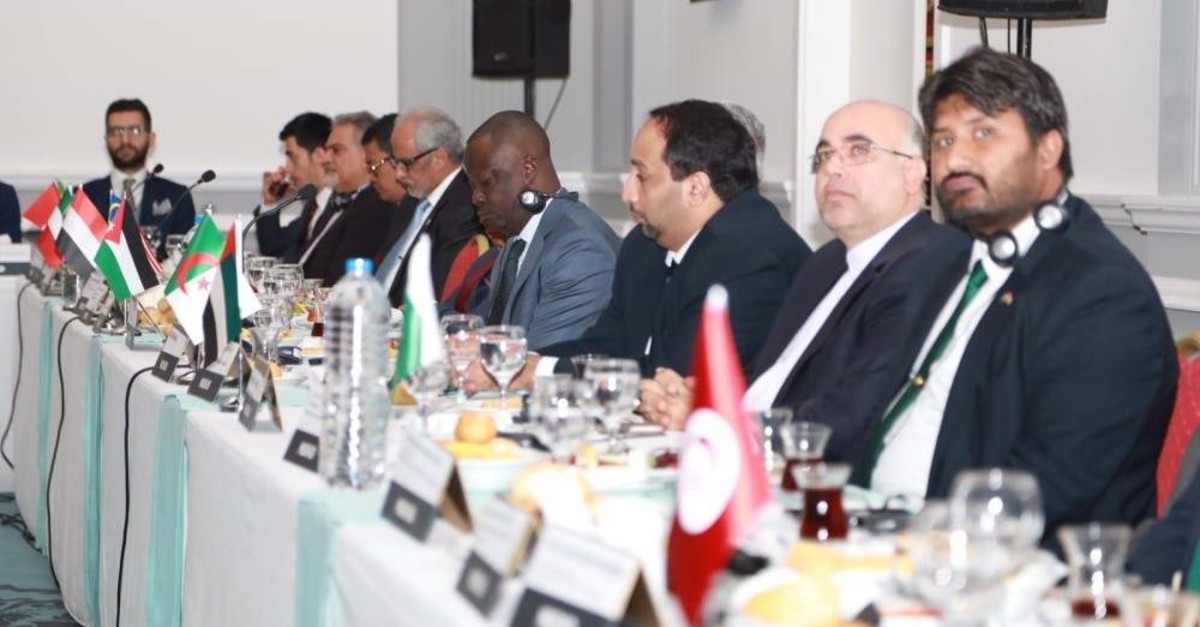 Ambassadors from a number of countries in Turkey’s neighboring region as well as from Africa and the Asia-Pacific region praised their countries' economic relations with Turkey, noting the importance of Turkish business corporations and associations in this regard.

The envoys’ remarks came on the sidelines of the International Diplomacy Summit – organized by the Turkish Independent Industrialists and Businessmen's Association (MÜSİAD) in western Turkey’s Sakarya province – during which trade and investment issues between Turkey and the participant countries were discussed.

The meeting was attended by Sakarya Mayor Ekrem Yüce, the Justice and Development Party's (AK Party) provincial chairman, MÜSİAD board members and a number of ambassadors from over 30 countries, including Kuwait, Pakistan, Iran, Iraq, Syria, Palestine, Malaysia and Nigeria, along with the trade attaches from various countries and representatives of several companies.

Speaking at the meeting, Nigerian Ambassador to Turkey Iliyasu Audu Paragalda said his country has been enjoying excellent relations with Turkey via MÜSİAD so far, adding that “they look forward to advancing bilateral ties, hoping that the two-day meeting would result in bringing investment in Nigeria.”

Paragalda said that Nigeria has potential but they need support from Turkey, especially for infrastructure, while providing more business opportunities via corporations or associations like MÜSİAD.

Speaking to Daily Sabah, Iranian Ambassador Mohammad Farazmand pointed out the unilateral moves of some countries targeting the region, namely the U.S., which Farazmand referred to as waging a war against them with economic sanctions.

Farazmand added that Iran is not the first and will not be the last country in the region targeted by the sanctions.

Palestinian Ambassador to Turkey Faed Mustafa said that Turkey, and MÜSİAD specifically, have been carrying out various projects in Palestinian lands, adding that they are also planning to establish factories within the scope of upcoming projects. He thanked Turkey for its contributions to his country.

Mustafa said that the mutual trade volume between Turkey and Palestine is growing every day even though the Palestinian economy is getting worse due to the Israeli blockade and occupation.

“The Palestinian economy is suffering from this because Israel has been occupying our agricultural lands,” he said, adding that they have been working hard to resist this with Palestinian business people and companies.

He added that they also have many Palestinian students in Turkey who create a cultural bridge between the two countries.

Mohri added that they expect more Turkish companies in Algeria, where they present huge business opportunities.

Muhammad Arshad Jan Pathan, undersecretary of the Pakistani Embassy in Turkey, told Daily Sabah that Turkey and Pakistan had always had good relations and Pakistan will continue its support for Turkey in the future in multiple aspects.

“Pakistan-Turkey relations are exemplary sort of relations and we see our relationship as highly embedded in history, culture and religion, Pathan said, adding that they are expecting a visit from Turkish President Recep Tayyip Erdoğan which will be another landmark between the countries.

Noting that the bilateral trade between Turkey and Pakistan is a bit below its true potential, Pathan added that they are also looking forward to signing “a very important agreement between the countries during the Turkish president’s visit, an agreement that will include cooperation in many sectors and all ministries.”

In an interview with Daily Sabah on the sidelines of the summit, representative of MÜSİAD in Libya Murtaza Karanfil said that the opening of the branch office of the association in Libya was postponed due to ongoing events and instabilities in the country, but the association is planning to open the office at the end of this year.

Security problems affect Libya and its trade and economic relations with other countries, but it has big potential in trade opportunities with all African countries, he added.

“Turkey has good economic relations with Libya and we do not want to lose this in the future as well,” Karanfil added.

Adnan Bostan, supreme board chairman of the association, said that the association has branch offices and representatives in 95 countries and 87 locations in Turkey with an employment capacity of 1,600,000 people, noting the association is Turkey’s biggest and the most influential global monetary fund platform.

Bostan said that MÜSİAD works as a bridge between Turkish investors and foreign countries, adding they have signed a memorandum of understanding (MoU) agreements with leading business companies and nongovernmental organizations in several countries.

“Within this year we will have business trips to Colombia, Mexico, Malaysia, Indonesia, China, Uzbekistan, India and Russia. We will also mark the openings of our branch offices in Sydney and Kazakhstan,” Bostan said.

Also speaking at the meeting, Zeki Güvercin, MÜSİAD board member and chairman of diplomatic relations, said that they have been giving special attention to Turkey’s economic relations with the Arab world, along with the association’s provision of necessary business opportunities to companies owned by Arabs living in Turkey.

Echoing Güvercin’s statements, Bostan also said that there are a high number of Arab businesspeople in Turkey and MÜSİAD has been connecting with many of them through projects and meetings.

"We had several meetings with them in several cities across Turkey, including southeastern Gaziantep and northwestern Bursa," he noted, adding that there will be a very important meeting in southern Turkey’s Hatay on March 20.

Güvercin further asserted that this two-day program of MÜSİAD, which contains a separate summit with international students in the country, is expected to be a good initiative for possible economic relations with the participant countries and Turkey, adding that the international students studying in Turkey are the future of Turkey’s relation with the other countries and constitute the core of several projects in Turkey.

“We had six months of training and education for the international students to integrate them into our work regarding business and international trade,” he noted.