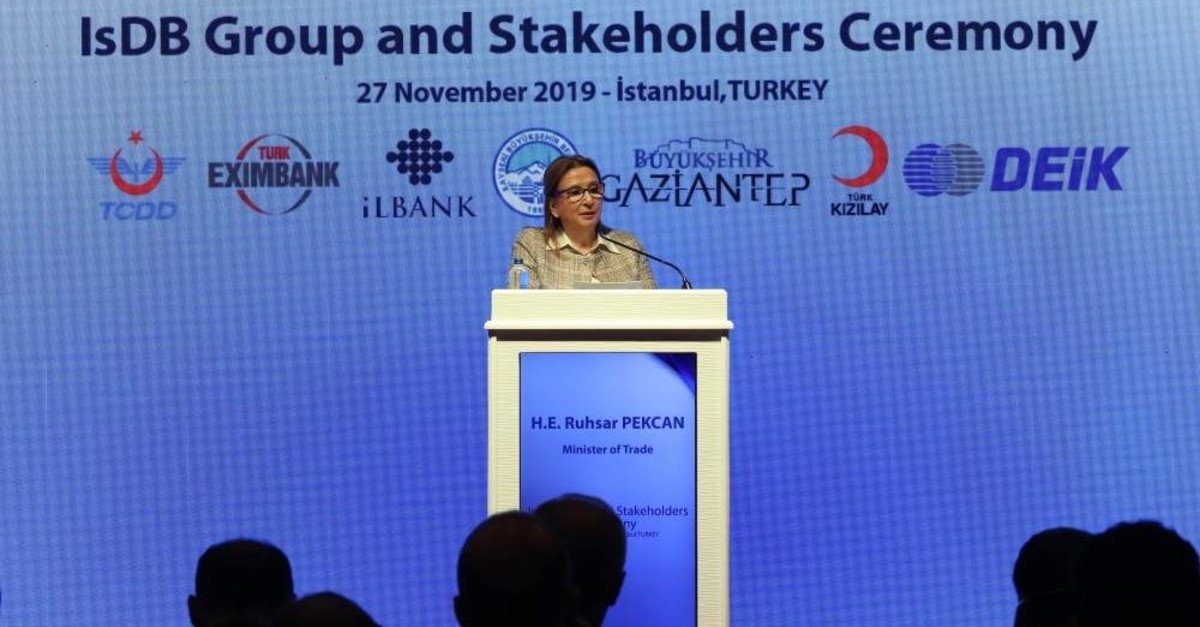 Trade Minister Ruhsar Pekcan speaks at the IsDB Group and Stakeholders Ceremony held on the sidelines of the 35th Ministerial Meeting of the Committee for Economic and Commercial Cooperation of the Organization of the Islamic Cooperation, Nov. 27, 2019. (AA Photo)
by Anadolu Agency Nov 28, 2019 4:33 pm

The deals were signed in the Turkish financial capital Istanbul on the sidelines of the 35th Ministerial Meeting of the Committee for Economic and Commercial Cooperation of the Organization of the Islamic Cooperation (COMCEC).

"I wish for us to support one another on any platform, including politics, trade, etc.," she said.

Underlining the importance of Türk Eximbank, Pekcan said it is expected to provide more than $40 billion in financing for exporters. Turkey is the Islamic bank's fourth-largest recipient of finance, she noted.

Saying that the IsDB will provide loan and insurance support to Türk Eximbank, she added: "I am happy that the loan will be used especially in trade between Islamic countries and to help regional and global development and welfare."

A syndicated murabaha (interest-free) deal worth $150 million was also signed between the International Islamic Trade Finance Corporation and Türk Eximbank. ICIEC, the Islamic bank's insurance arm, and Eximbank; the parties also also signed a memorandum of understanding worth $180 million for a club loan facility.

Turkish Transport and Infrastructure Minister Cahit Turhan said that multilateral cooperation is key to overcoming global challenges. Along these lines, the Islamic finance model plays an important role in the development of Islamic countries, he added.

"We would like to further our existing successful cooperation to support big development projects and encourage socioeconomic improvement," he said.

Praising the Islamic bank's support for Turkey over the last five years, Turhan said the financing carries great importance for the progress of Turkish railways. "The inauguration ceremony of a project we held today includes 10 high-speed train sets. We plan to run it commercially by February 2020," he said.

For his part, Islamic Development Bank head Bandar Hajjar said the bank has approved total financing of $11.6 billion to Turkey. Pointing to the cooperation between the ITFC, an arm of the Islamic bank, and Türk Eximbank, Hajjar said it provided $4.2 billion for the country.

"The ITFC's support to Türk Eximbank has benefited 440 Turkish private sector companies, mostly SMEs, employing around 90,000 people and operating in diverse sectors such as iron and steel, automotive, chemicals and textiles," he said. He added that ICIEC business insured for Turkey has reached $6.8 billion.

"Such support has led to a significant development impact for employment creation, export capacity expansion and revenue generation for beneficiary companies in the country," Hajjar said.