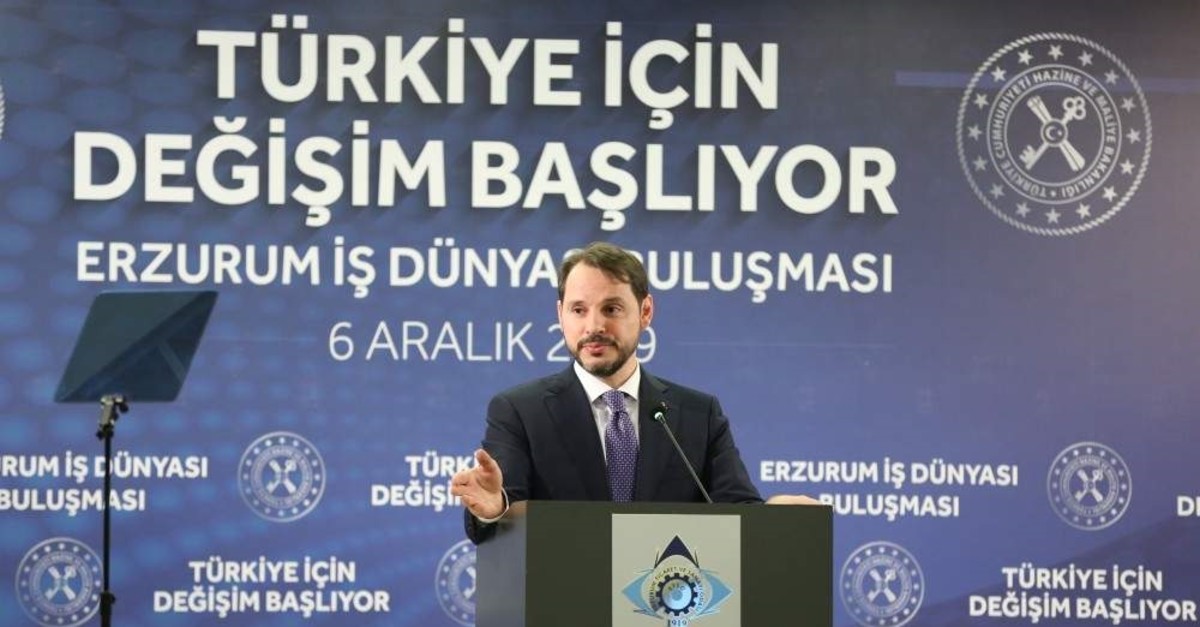 Turkey has now switched to positive growth on an annual basis, Finance Minister Berat Albayrak said, underlining that the country is on its way to achieving its year-end inflation target

After multiple tryouts over the last year, it is now time to take Turkey's economic potential much further, said Treasury and Finance Minister Berat Albayrak.

“If we can establish an economic change and transformation process based on value-added, technology and exports, we will have set in motion Turkey’s potential in a way that it will not be interrupted again,” Albayrak said at a meeting with businesspeople in the eastern province of Erzurum on Friday.

After three consecutive quarters of contraction that followed turmoil and high volatility in exchange rates as of the second half of last year that pushed up inflation and interest rates while domestic demand tumbled, the Turkish economy has entered a promising era of growth in the third quarter of this year.

“In addition to the positive growth we achieved on a quarterly basis, we have also switched to positive growth on an annual basis,” Albayrak said, elaborating on the data.

Compared to the second quarter, gross domestic product (GDP) expanded by a seasonally and calendar-adjusted 0.4%, its third positive quarter-on-quarter in a row, TurkStat data showed.

The third-quarter growth was driven by the agricultural sector, which expanded 3.8%, while industry grew 1.6% and services grew 0.6%. However, the construction sector, which underpinned years of strong economic growth in Turkey, shrank 7.8%, the data said.

Albayrak stressed that the contribution of the domestic demand, which had been negative for the last four quarters, to growth returned to positive in the third quarter of this year and made a positive contribution of 1.1%.

Also, the contribution of the industry sector, which had been negative for the last three quarters, turned positive in the third quarter of this year and achieved a positive acceleration of 0.3%, the minister noted.

“The preliminary indicators show that the recovery trend in economic activity has been progressing further. Seasonally adjusted indexes, capacity utilization show that in the fourth quarter we will achieve the 5% growth target, which we also set for 2020,” Albayrak stressed.

The government forecasts a 0.5% growth for this year. Also, the country's new economic program (NEP) for 2020-2022, unveiled on Sept. 30, targets a 5% annual growth rate for each of the next three years.

On the other hand, inflation, which had become a pressing issue for the Turkish economy over the last year, dropped significantly throughout the course of this year after topping 25% in September last year amid high fluctuations in exchange rates.

As expected, the consumer prices index reverted to double-digit territory and rose in November, however, less than market consensus. It rose to 10.56% year-on-year last month due to waning of a so-called base effect, the Turkish Statistical Institute (TurkStat) announced Tuesday. Month-on-month, consumer inflation stood at 0.38% last month, compared with a market forecast of 0.7%.

Elaborating on the data, Albayrak said last month’s figure was in line with their projections, adding that Turkey would end 2019 achieving its inflation target of below 12% and noting that they also are moving with firm steps toward the eventual target of 5%.

ECONOMY ON GROWTH PATH DESPITE RISKS

Separately, elaborating on the latest developments, international economists said the Turkish economy has entered a growth path but must be wary of risks along the way.

Piotr Matys, a strategist at Dutch-based Rabobank, told Anadolu Agency (AA) Friday that the Turkish economy is recovering from a recession but raised the question of whether the country's growth will prove sustainable in the long term.

Stating that the economic model based mainly on private consumption fueled by credit and construction has run its course, Matys said: "Turkey must – and certainly is capable of – reinventing itself by focusing on high value-added goods that would allow it to integrate closely with global value chains."

Matys highlighted that foreign investors expect the government to implement structural reforms to reach its growth target for next year.

He also recommended that the country unleash the potential of its agriculture sector to bring down "persistently" high food prices while making it an important pillar of the economy. "Russia is a great example, as the agriculture sector is booming after the government offered various incentives to farmers and food production increased substantially," he said.

On the other hand, Nigel Rendell, a London-based Europe, Middle East and Africa analyst for Medley Global Advisors, projected Turkey's economy will grow 1% on a quarterly basis between October and December.

“The annual figure will be artificially high, around 4% year-on-year, given the comparison, will be with the depths of the lira-induced recession from a year ago,” he added. The average GDP growth for 2019 as a whole is expected to be positive and close to the government forecast of 0.5%, he said.

Touching on the government's targets for next year, Rendell said: "The economy will strengthen next year, given the interest rate declines and the state banks' willingness to promote lending, but we expect economic growth to be around 3.5%."

If the economy grows too quickly, imports tend to rise sharply, leading to a growing current account deficit which risks leading to a weaker lira, he warned. High interest rates and the stable currency makes Turkey an attractive proposition for foreign investors at the moment, he said.

The benchmark policy rate of the CBRT currently stands at 14%. Since the beginning of this year, the bank has cut the rate by 10 percentage points in the wake of the downward trend in inflation.

"Any moves to make aggressive cuts in interest rates ahead of this could unnerve investors," cautioned Rendell.