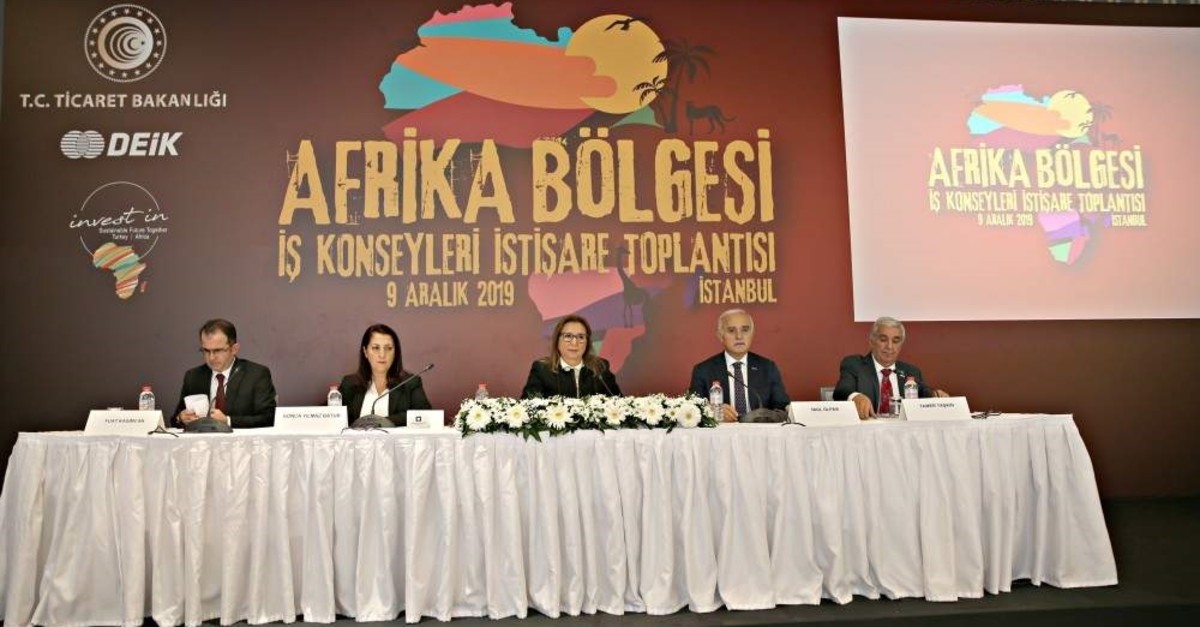 Addressing a consultation meeting of African Business Councils under Turkey's Foreign Economic Relations Board (DEİK), Pekcan said: “We are founding trade centers in the destinations we have previously determined. But more importantly, we should establish logistics centers in several points in Africa. We have launched our operations accordingly.”

Just around the corner, 2020 will be the year of Africa for Turkey, which is engaged in several trade efforts on the continent, the trade minister said.

Turkey has embassies in 42 countries and commercial counselors in 26 countries on the Africa continent. Turkey’s national flag carrier Turkish Airlines also flies to 35 destinations on the continent.

Turkey signed FTAs with Morocco, Egypt, Tunisia and Mauritius, Pekcan noted, adding that deals with Sudan and Ghana are in the process of approval. "Our negotiations are ongoing with Somalia and Seychelles, while we will sign preferential trade agreements with Mozambique and Mauritania," she added.

Turkey will probably organize a Turkey-Africa partnership summit in April under the auspices of the Turkish Presidency, she indicated.

But $14 billion in exports is too low of a figure for the large African continent, she said, urging Turkey to increase target-oriented efforts in Africa amid rising global protectionist policies.

In the period of January-November, Turkey’s bilateral trade with the continent rose by 7.7% to reach $22.9 billion.

The exponential increase in bilateral trade and the close political ties between Turkey and African countries have been facilitated by Turkey’s Africa initiative.

In 2005, the Africa year, Turkey officially started its initiative for Africa and prepared the Strategy for the Development of Relations with African nations. After holding the first Turkey-Africa Cooperation Summit in 2008, relations were sealed under the Turkey-Africa Partnership and a new phase was launched in 2010.

Another Turkish contractor actively undertaking infrastructure projects in Africa is Yapı Merkezi, which over the last 10 years completed the El Mek Nimir Bridge in Sudan over the Nile and the Al Halfaia Bridge, then the Al Wahat Shopping Mall in Khartoum, Sudan. The company undertook a $1.2-billion high-speed train project with its Portuguese partner in February 2016 in Tanzania and single-handedly won the contract for the second stage of the same project. A number of other Turkish firms have also constructed and continue the construction of infrastructure, house development and transportation projects across the continent.

Lastly, one of the largest Turkish contractors, Kalyon İnşaat, has been contracted for the construction of an 18-stop bus-rapid-transit line, which is known as the metrobus in Istanbul, in Mali’s capital Bamako. The company will begin the construction of the 20-kilometer first phase in early 2020 to resolve the traffic congestion problem in the city. The second 15-kilometer phase will see the launch of construction in 2021. The project cost is estimated at $120 million.

Touching on protectionist policies across the globe, the official said their negative effect was $893 million in 2017 while it was $7.2 billion in 2018 on Turkey's trade.

"The effect is expected to reach $11 billion in 2019. If the U.K. leaves the EU without a deal, the U.S. will start to implement new sanctions on the automotive sector, and it can reach $14.4 billion," she highlighted.

Pekcan added: "We should play a proactive role in our target markets and countries which have potential."

Also speaking at the meeting, Nail Olpak, the head of the DEİK, said African Business Councils work with 45 countries for increasing economic relations between Turkey and Africa.

Turkey and African countries' bilateral trade is yet to achieve the desired level, he said. DEİK will organize several events, including the Turkey-Africa Economy and Business Forum, in 2020, he added.