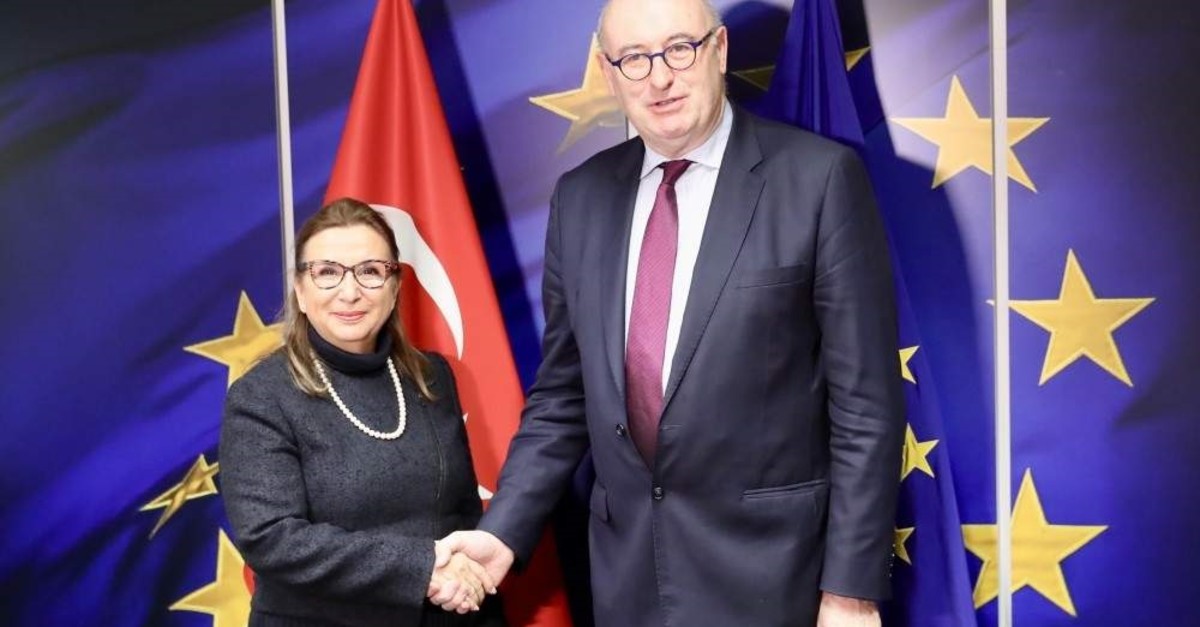 Turkish and European authorities have once again reiterated their common will to expand mutual investments and commercial ties while the negotiations for the update of the 24-year old customs union agreement seem to be stuck in a deadlock over political tensions.

Following a meeting with European Commissioner for Trade Phil Hogan on Friday, Trade Minister Ruhsar Pekcan highlighted that Turkey and the European Union share a strong common will to further improve bilateral trade and investments.

"We are pleased to see that Turkey and the EU agree on establishing a positive dialogue for the further development of the economic rapport," Pekcan said.

In the period of 2002 to September 2019, Turkey attracted $106.16 billion in foreign direct investments (FDI) from the EU member countries, accounting for the 66.6% of the total FDI accumulated over the span of the said period. In September alone, the amount of FDI that came from the EU countries was recorded at $2.2 billion, according to the data of the Industry and Technology Ministry.

Modernization of the customs union deal was the top agenda item of the meeting, Pekcan stressed. "Turkey has completed all necessary preparations for the launch of the negotiations. However, the European Commission must receive the mandate from the European Council. Unfortunately, nonconstructive political approaches to this issue have hampered any progress so far. I have discussed the benefits of an updated customs union agreement for both sides," she explained.

The impact assessments carried out by both sides have proved that the revamped customs agreement will be extremely beneficial for Turkey and the EU economies, she said, confirming that the new trade commissioner shares a common understanding with Turkey. "We both believe that expanding commercial ties will also positively reflect on political relations," Pekcan remarked, highlighting that the better commercial and economic relations will function as a locomotive for political rapport.

Turkey is the only non-European Union country with a customs union agreement with the bloc. The deal was penned with the European Economic Community (EEC), forerunner to the EU, in 1966. In its Dec. 21, 2016, assessment, the European Commission proposed revamping the deal, which currently only covers a limited range of industrial products and excludes agriculture, public procurement and services. With the inclusion of these sectors with third-party countries, bilateral trade between Turkey and the EU is expected to reach $300 billion, a stark increase from its current level of $165 billion.

In the first 10 months of the year, EU exports to Turkey totaled 60.3 billion euros ($67.3 billion), while imports from the country were 67.1 billion euros during the same period, leaving Turkey with a trade surplus of 6.8 billion euros, Eurostat data revealed.

The updated Customs Union is expected to expand Turkey's gross domestic product (GDP) by 2% by 2030, and bring about a 24.5% increase over the normal rate of increase in total exports and a 23% increase over imports. With the public procurement tenders available as a result of an expanded version of the deal, Turkey aims to secure access to bids in European countries and participate actively in the decision-making processes. Talks are ongoing, however, and will cover a wide range of issues, including the trade of agricultural produce and entrance of second-hand automobiles to the country.

The minister also noted that the commercial measures the EU is implementing against steel products were also discussed.

Pekcan underscored that although the EU hasn't taken direct measures against Turkey but has taken a measure related to the steel sector to counter the U.S.' steel tariffs, the Turkish steel industry is the most affected by these measures.

She added that they shared all the related data with Hogan. "I also shared with Phil Hogan that our exports in the first 10 months of 2019 fell by 25%, especially in country-specific quota products," she noted.

The Brexit issue was also on the agenda during discussions, Pekcan said, noting that post-election developments in the U.K. suggest that the country will exit the bloc with a deal. "Turkey is working on an agreement that will be signed parallel to the agreement to be inked between the EU and the U.K.," the minister said.

Previously, she had warned that Turkey would be the most affected after the EU in the event of a possible no-deal Brexit, saying Turkey's loss of trade with the U.K. could come to around $3 billion.