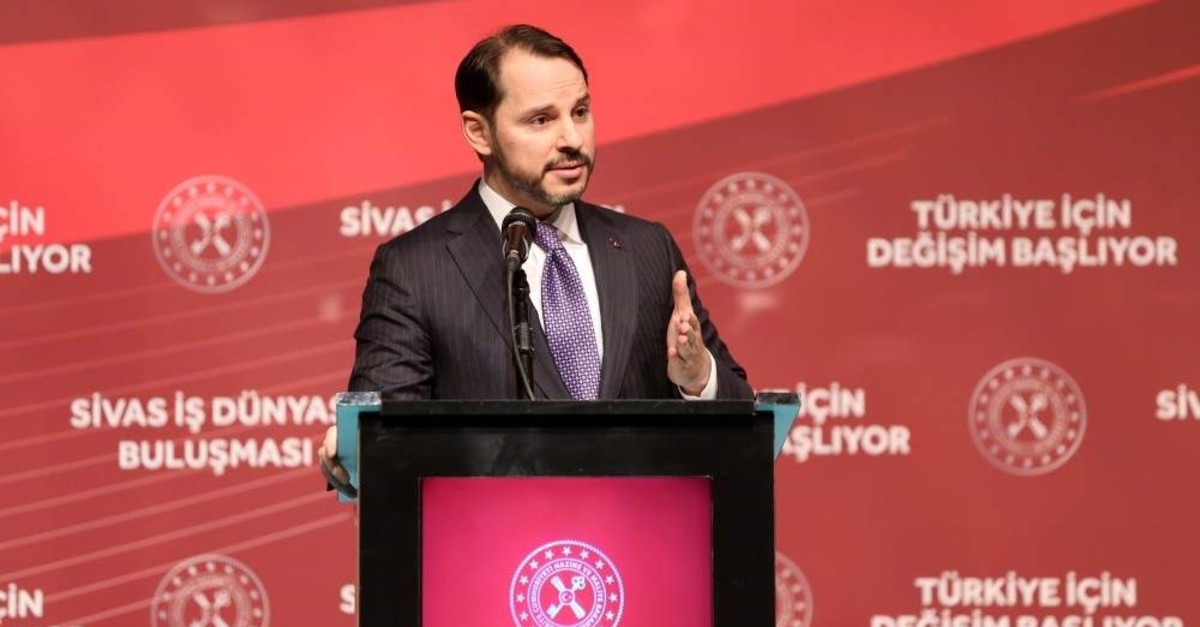 Treasury and Finance Minister Berat Albayrak speaks at a meeting with businesspeople in the central Anatolian province of Sivas, Jan. 9, 2020. (AA Photo)
by Daily Sabah with AA Jan 09, 2020 7:40 pm

Setting a trend of positive growth, the Turkish economy delivered a performance that exceeded expectations last year and is forecast to post significant growth this year

Thanks to reform measures that mitigated the negative impact of the high market volatility that began in the summer of 2018, the Turkish economy's performance last year surpassed expectations, Treasury and Finance Minister Berat Albayrak said Thursday.

Despite the bleak outlook at the beginning of the year and negative growth expectations, the Turkish economy has entered a positive expansion trend in the third quarter of the year.

In his address to businesspeople in the central Anatolian province of Sivas, Albayrak stressed that the government policies have yielded successful results as reflected in the falling inflation, interest rates, credit default swaps (CDS) and positive growth trend. "International agencies have all revised their estimates for the Turkish economic growth," he said, adding, "We have surpassed all the expectations in 2019, a year tainted by high tensions and uncertainty in global politics and economy."

For the Turkish economy, 2019 was not as easy as it seems in hindsight, the minister remarked. Turkey had faced a number of challenges, including threats of sanctions which were heightened during Operation Peace Spring in October.

The positive momentum gained in 2019 will further advance this year, Albayrak emphasized. "We devise our entire strategy and policy with a view to fully institute a manufacturing infrastructure that focuses on value-added exports and increased employment. The strategic transformation addresses exports, manufacturing, production and import substitution," Albayrak explained.

In order to strengthen the fragilities of the Turkish economy, the institutions are working in unprecedented coordination and implementing middle term and long-term policies, the minister said.

Turkey's economy grew by 0.9% in the third quarter of 2019. The economy had contracted 1.5% year-on-year in the second quarter and 2.6% in the first quarter of the year. Turkey's gross domestic product (GDP) shrank 3% in the fourth quarter of 2018.

In its Global Economic Prospects report announced Wednesday, the World Bank said the Turkish economy will grow 3% this year, stressing that the economy will start expanding again.

"In Turkey, activity is rebounding from earlier financial turmoil at a faster-than-expected pace as domestic demand improves, however, the pickup remains fragile amid subdued confidence and investment," the report read.

In reference to the industrial production and manufacturing data, the World Bank stressed that the Turkish economy began to stabilize in late 2019, following the disruptions from acute financial market pressures in the previous year.

In a statement to Anadolu Agency (AA) on Thursday, World Bank Economic Development Outlook Director Franziska Ohnsorge stressed that the Turkish economy delivered a higher-than-expected performance last year. "We had estimated contraction last year. The upward trend has caught us by surprise," she said, continuing: "The Turkish economy will begin growing again. We are expecting a 3% growth this year. This estimate is based on the decreasing policy uncertainty."

The World Bank projects the global economy will grow by 2.4% this year, just one-tenth more than 2019 but slower than the 2020 forecast released in June.

After the announcement of the third-quarter data, several international monitoring agencies, rating agencies and investment banks also revised their estimates on the Turkish economic growth.

The International Monetary Fund (IMF) report said the Turkish economy may see a growth of 0.25%, reversing previous forecasts of a 2.5% contraction while the Organization for Economic Cooperation and Development (OECD) revised the 2019 forecast to 0.3% from a 2.9% contraction.

The U.S.-based credit rating agency Moody revised Turkey's economic growth forecast to 0.2% for 2019 from a 2% contraction and 3% for 2020 from 2%, citing the country's strong economic recovery.