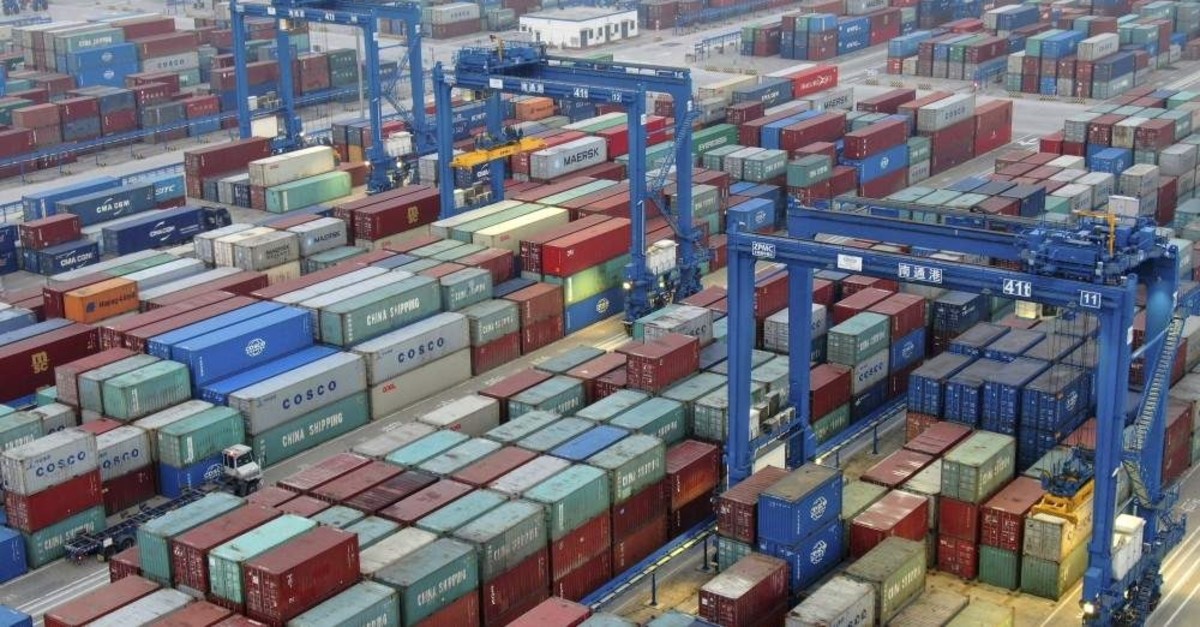 In this Jan. 14, 2020, photo, shipping containers are stacked at a dockyard on the Yangtze River in Nantong in eastern China's Jiangsu Province. (AP Photo)
by Compiled from Wire Services Jan 17, 2020 10:21 am

China's economic growth cooled to its weakest in nearly 30 years in 2019 amid a bruising trade war with the United States, and more stimulus is expected this year as Beijing tries to boost sluggish investment and demand.

The world's second-largest economy grew by 6.1%, down from 2018's 6.6%, already the lowest since 1990, government data showed Friday. Growth in the three months ending in December held steady at the previous quarter's level of 6% over a year earlier.

Business sentiment received a boost from Wednesday's signing of an interim deal in the costly war over Beijing's technology ambitions and trade surplus. The Trump administration agreed to cancel planned tariff hikes on additional Chinese imports and Beijing promised to buy more American farm goods, though punitive duties already imposed by both sides stayed in place.

The Chinese downturn might not have bottomed out yet, but improved activity in December suggested the cooling of tensions might be encouraging companies and consumers to spend and invest, private sector economists said.

The agreement "is a signal that the situation is unlikely to deteriorate," said Chaoping Zhu of J.P. Morgan Asset Management in a report.

Chinese exporters have been battered by U.S. President Donald Trump's tariff hikes, but a bigger blow to the economy came from weakness in consumption.

Households, spooked by the trade war and job losses, put off big purchases. Auto sales fell for second year in 2019, tumbling 9.6%. Growth in retail spending decelerated to 8% over a year earlier, down from 8.2% in the first nine months of the year.

The economy faces "downward pressure" and "instability sources and risk points" abroad are increasing, the government said in a statement.

The trade war adds to pressure on Chinese leaders who also are struggling to shore up growth and rein in surging food costs following a disease outbreak that slashed supplies of pork, the country's staple meat, and sent prices soaring.

Chinese exports ended 2019 up 0.5% despite the tariff war and weaker global demand.

Manufacturers stepped up efforts to sell to other markets, recording double-digit gains in exports to France, Canada and other economies.

"Sluggish global growth will continue to challenge the external outlook, but we expect the phase one deal with the U.S. to have a favorable impact on exports and support domestic sentiment and confidence," said Louis Kuijs of Oxford Economics in a report.

The International Monetary Fund and private sector forecasters expect this year's growth to decline further to as low as 5.8%. That would be barely one-third of 2007's record 14.2% expansion but still would be among the world's strongest.

The party is trying to steer China to slower, more manageable growth, but an abrupt downturn in activity and the clash with Washington forced the ruling party to step up government spending and take other measures to support growth.

The central bank has tried to lower borrowing costs and channel credit to entrepreneurs who generate China's new wealth and jobs. But Beijing has avoided a large-scale stimulus that might reignite a rise in debt that already is so high that rating agencies have cut its credit rating for government borrowing.

"The outlook for 2020 is for continued resilient growth, boosted by the Phase One trade deal with the U.S. and the continued positive impact" of government stimulus, said Rajiv Biswas of IHS Markit in a report.