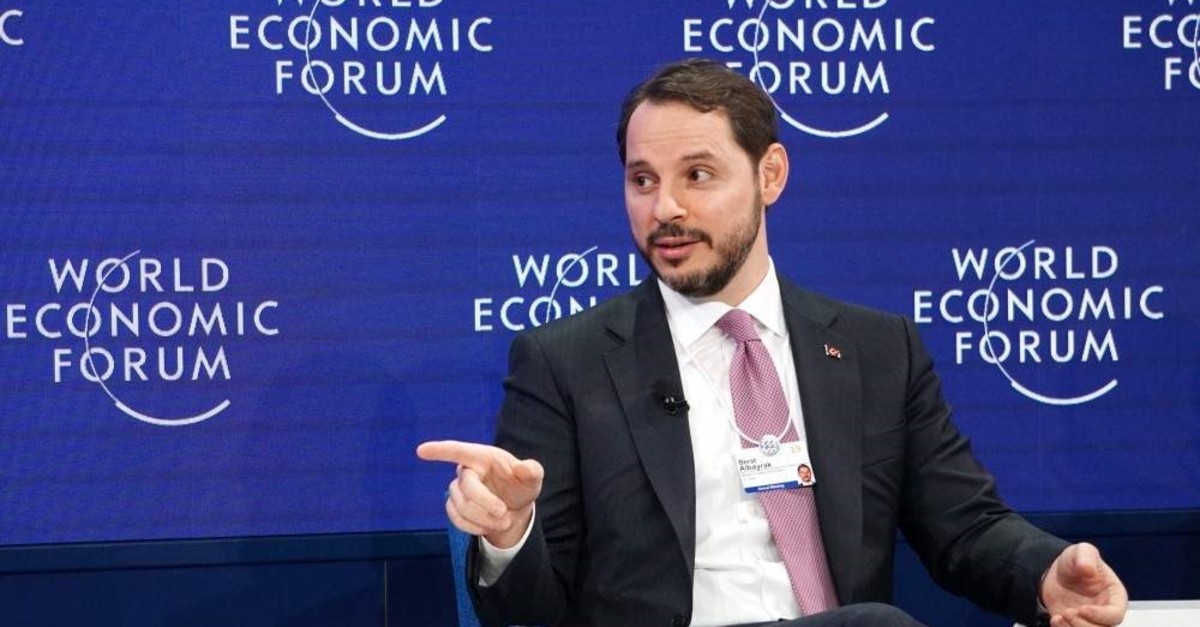 Compared with last year, Turkey is taking the stage at this year's World Economic Forum (WEF) with a much more positive outlook, Treasury and Finance Minister Berat Albayrak said Wednesday.

"There is a positive process going on in Turkey. We have been through a year in which those who had trust in the Turkish assets won. They (assets) have by far come to the fore in terms of returns compared to other competing investment instruments since August," Albayrak told reporters on the sidelines of the 50th WEF in Davos, Switzerland.

Turkey, especially in terms of policymakers, stakeholders, private sector and finance sector, is going through a more coherent and synchronized period than ever before, the minister said.

"This also increases the financial activities of Turkey," he added.

The "Turkish House" - a small modular building that looks like a cottage - has been set up at the WEF to showcase investment opportunities and local products from Turkey. It was launched under the guidance of the Treasury and Finance Ministry in coordination with the Banks Association of Turkey.

He remarked that there were talks on being involved or partnering in the center especially from Gulf, European and Asian countries. He added that Turkey was a natural hub with its geostrategic location, infrastructure and well-developed human resources.

Representatives from the Turkey Wealth Fund (TWF), the Turkish Investment Office and the Turkish Finance Office were also scheduled to hold bilateral meetings with executives from investment companies, wealth fund managers from other countries and portfolio managers.

Albayrak further remarked that with the beginning of this year, the Turkish economy has entered a new era.

The economy began rebalancing in 2019 after losing momentum in the second half of 2018 due to turmoil and high volatility in exchange rates that pushed up inflation and interest rates while domestic demand tumbled.

The country reentered the path to growth in the third quarter of 2019 thanks to steps toward balancing implemented by the economic administration and strong synergy between the government and the private sector.

Turkey's gross domestic product (GDP) entered a promising era of growth in the third quarter of 2019, after three consecutive quarters of contraction. The economy grew 0.9% year-on-year between July and September of this year, according to Turkish Statistical Institute (TurkStat) data. Compared with the second quarter, GDP expanded by a seasonally and calendar-adjusted 0.4%, its third positive quarter-on-quarter in a row, TurkStat data showed.

The average estimates for the fourth quarter of the year are 4.5% to 5%. The overall annual growth forecasts vary by 0.3% to 0.6%. The government forecasts growth of 0.5% for the whole 2019. Also, the New Economic Program (NEP) for 2020-2022 announced by Albayrak in September 2019 targets a 5% annual growth rate for each of the next three years.

Albayrak noted that Turkey's circumstances have now taken a turn for the better, after the country was subject to roughly three currency attacks between June 2018 and June 2019.

Underlining that growth was the WEF's main focus this year after environmental concerns, he stressed that while "developed and developing countries' contributions to the world economy are decreasing," Turkey's 5% growth target for 2020 was important for the world.

Turkey to scrap extra tariffs if U.S. does

Also speaking to reporters on the sidelines of the event, Trade Minister Ruhsar Pekcan elaborated on global developments that affect trade and Turkey's tariff dispute with the U.S.

She stressed that Turkey would remove additional tariffs as soon as the U.S. lifts those imposed on Turkish imports.

On Aug. 10, 2018, U.S. President Donald Trump authorized the doubling of already-imposed additional tariffs on steel and aluminum imported from Turkey, amid a diplomatic row between the NATO allies over Turkey's arrest of American pastor Andrew Brunson, who was released in October. Washington had imposed higher tariffs to put economic pressure on Turkey to release Brunson, who was detained over terrorism charges. The U.S. had levied 20% tariffs on aluminum and 50% on steel imports. Turkey retaliated by doubling tariffs on U.S. cars, alcohol and tobacco imports.

Later in May 2019 Turkey decided to reduce additional duties on some U.S. imports in response to a similar move by the U.S. that halved the tariffs on Turkish steel imports to 25% from 50%.

The trade minister emphasized that although the year 2019 saw ups and downs in Washington and Ankara's relations, the trade volume did not reflect that.

"However, we want to increase volume instead of preserving the existing situation," Pekcan said.

Pekcan also touched upon the escalating trade wars, saying that the increasing trade wars are not benefiting the economies of the developed countries that initiated those wars.

"World is in a decline in terms of growth, along with the global trade and investments while uncertainties have increased," she said, stressing that, meanwhile, Turkey had a relatively fine year in an environment like this.

The export volume of the first 50 countries which recorded the utmost increase in global exports, has decreased some 2.7% as of the last three month of 2019, while Turkey recorded a 2.6% increase, according to a data by World Trade Organization (WTO).

Speaking on Turkey's market targets, Pekcan noted that the country aims to open up to new markets while strengthening its position in existing ones.

Turkey's exports to the European Union decreased in 2019; however, as Pekcan put it, the country posted a $14 billion surplus in trade with the bloc. The highest trade volume increase was recorded with North Africa at 10.8% while other countries in Africa followed with 12.4% and Central America and the Caribbean, both with 7.5%.

The year 2020 has also started with a good performance with a 3% increase in exports in the first 20 days of January, the minister noted.

Murat Sönmez, managing director of WEF told Anadolu Agency (AA) at Davos that Turkey's strategic location combined with its trade agreements with other countries will make it even more attractive for investors in the coming year, highlighting the importance of maintaining dialogue to overcome existing obstacles.

"This is a great opportunity for the country, the potential is even bigger if globalization 4.0 is implemented in the right way," Sönmez said, adding that the country could become a key player in international trade networks and play a bigger role as a regional center of trade.

He noted that Turkey always had a very significant location connecting the East and the West.

"It is a given that the geographical location provides Turkey with important advantages; the country is at a four-hour flight distance from 1.5 billion people and to an economy of over $20 trillion," he highlighted.

Turkey is within the EU customs, and enjoys free trade agreements with 27 countries, allowing direct access to a market of a billion people, he added.

Sönmez also highlighted the importance of "stakeholder capitalism," which was included in the economic forum's manifesto this year, in an environment of global climate crisis, economic retaliation, rapid technological change and ever-changing geostrategic circumstances, which he described as an "emergency situation" for the world. The forum chairman stressed the importance of establishing stakeholder capitalism in a bid to fight those problems, along with fighting against inequality in wealth distribution and social inequality while enabling and maintaining the comprehensive global growth.

Saying that although globalization emerged as a beneficial process to a large extent, it brought some negatives as well, Sönmez said. He noted that the last 20 years saw a huge development globally, but the world is now in the fourth stage of this development in which it faces ever-growing geopolitical competition.

Inflation to drop to single digits

Addressing the reporters during the WEF, Murat Uysal, the governor of the Central Bank of the Republic of Turkey (CBRT), said the bank reduced the interest rates moderately in January, attributing it to the recovery in inflation expectations.

The bank earlier this month slashed its benchmark one-week repo rate by 75 basis points to 11.25% from 12%. Since July, the bank has cut rates by 1,275 points in a move to ease monetary supply to support investments and fuel growth.

Last year, it held eight monetary policy meetings, as interest rates fell by 1,200 basis points over the course of the year, from 24%. The bank scheduled 12 committee meetings for 2020.

Uysal added that the inflation is expected to reduce to single digits in the mid-year.

Inflation has been a pressing issue for the economy since the second half of 2018 when it surged to almost 25.24% in October as steep depreciation in the Turkish lira pushed up the price of imported goods. Since the beginning of 2019, inflation fell by 8.51% from 20.35% in January. It had eased to 9.26% in September when it hit single digits for the first time since July 2017 before dropping to 8.55% in October, its lowest since December 2016.

Uysal also highlighted that Turkish economy proved its strength with the decline in risk premiums, and gradual decrease in inflation. "There has been a clear improvement in financial conditions. We see a decrease in loan and deposit rates up to 1,400-1,500 basis points," Uysal said, adding that the Turkish economy is now experiencing mobility in the market, which was reflected in consumption, and is further expected to be seen in investment and employment, as well.