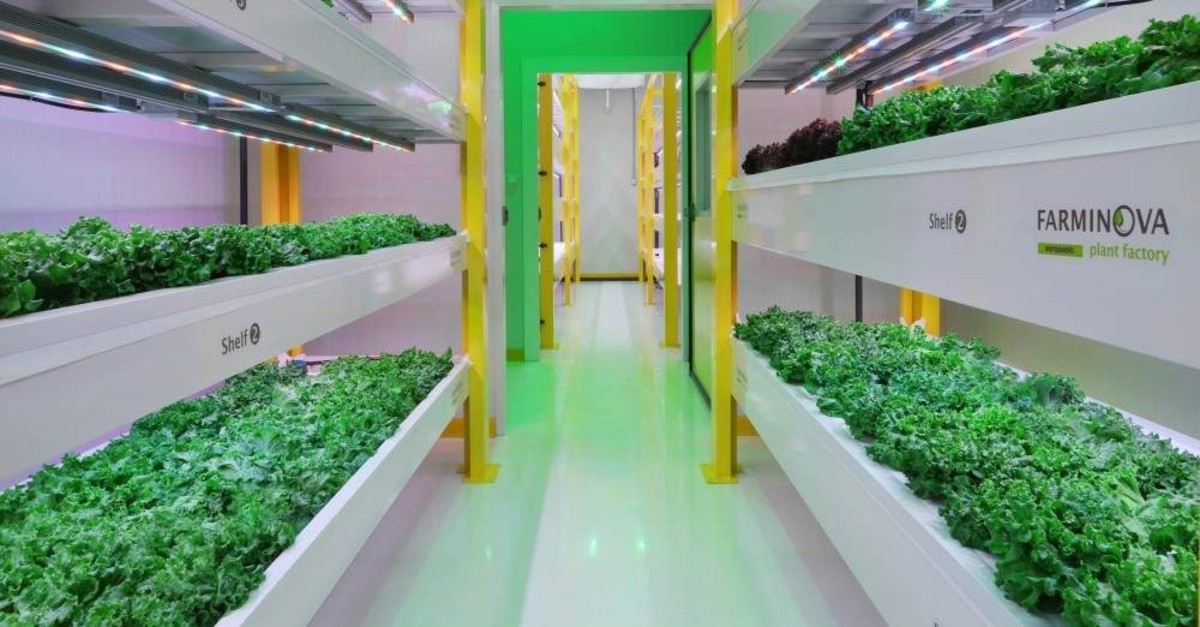 An Antalya-based firm has established Europe's largest and Turkey's first plant factory with an estimated investment of 2.5 million euros ($2.77 million), as part of its 5-million-euro research and development (R&D) activities.

The factory grows plants in a closed area without soil or sun while using 95% less water than conventional farming. In the first stage, it will produce green leafy plants like lettuce, arugula, cress, spinach, thyme and basil.

The factory, Farminova is run by Cantek Group that has operated in the food storage, processing and refrigeration technologies business at the Antalya Organized Industrial Zone for many years.

Company Chairman Can Hakan Karaca said they have launched an innovative initiative, establishing the largest active plant factory in Europe.

He added that the factory produces plants in a closed area without soil and sun and uses 95% less water. It produces plants without harming nature and living creatures, 24/7 all round the year needing any agrochemicals.

Karaca said the factory uses artificial intelligence (AI) and uses 100% Turkish products. He noted that they will start producing green leafy plants like lettuce, arugula, cress, spinach, thyme and basil in the first phase and strawberry and mushrooms in the second phase. This will be followed by the production of vegetables like tomatoes, peppers and eggplants.

Karaca added that seedsmen should also develop low-stature plants now. Pointing out that Japan and the U.S. have carried out experiments in plant factories, he said that they are the only Turkish company to participate in the training program run by Professor Kozai, an industry pioneer.

"We have developed the plant factories project step by step, establishing the largest plant factory operating in Europe. What makes the difference here is that we have built this factory using our own products only," he told.

He said the factory in Antalya is an exemplary model. "We aim to establish, expand and share with global investors this innovative development in the world of agriculture, which is a 100% Turkish product from design to software."

Karaca said they are working on establishing factories in seven or eight countries, particularly in Africa. "Our goal is to open two to five factories this year and 100 factories in the next five years, 90% of which will be abroad."

Factory consultants Glenn Behrman and Christine Zimmerman Loessl, who have been working around the world in this area, also elaborated on the factory.

Loessl said the world and its inhabitants have changed. "However, if we continue to treat the world this way, the world is not going to end up anywhere good. We see every day that agriculture has had a huge and dramatic impact on this change. This project will prevent the conversion of natural lands into agricultural lands. We can produce plants completely independent of the weather, the sun and the conditions outside. It provides a healthy and fixed-price guarantee. Vertical farming practices will completely change their perspective. It's not going to happen in a tick, but it is going to happen eventually."

Behrman, on the other hand, said he has set up similar facilities in many countries around the world. "This is the most innovative and largest facility in Europe. It can produce healthy products that are harmless and chemical-free. It is possible to produce essential foods and products, not just edible foods. It is highly effective in seedling production and seed cracking. It can also make healthy and high-quality contributions to the cosmetics industry. Healthy and nutritious products can be produced in shorter harvest time. It is a hyper-efficient system. Production is possible anywhere in the world with minimum energy and labor," he added.