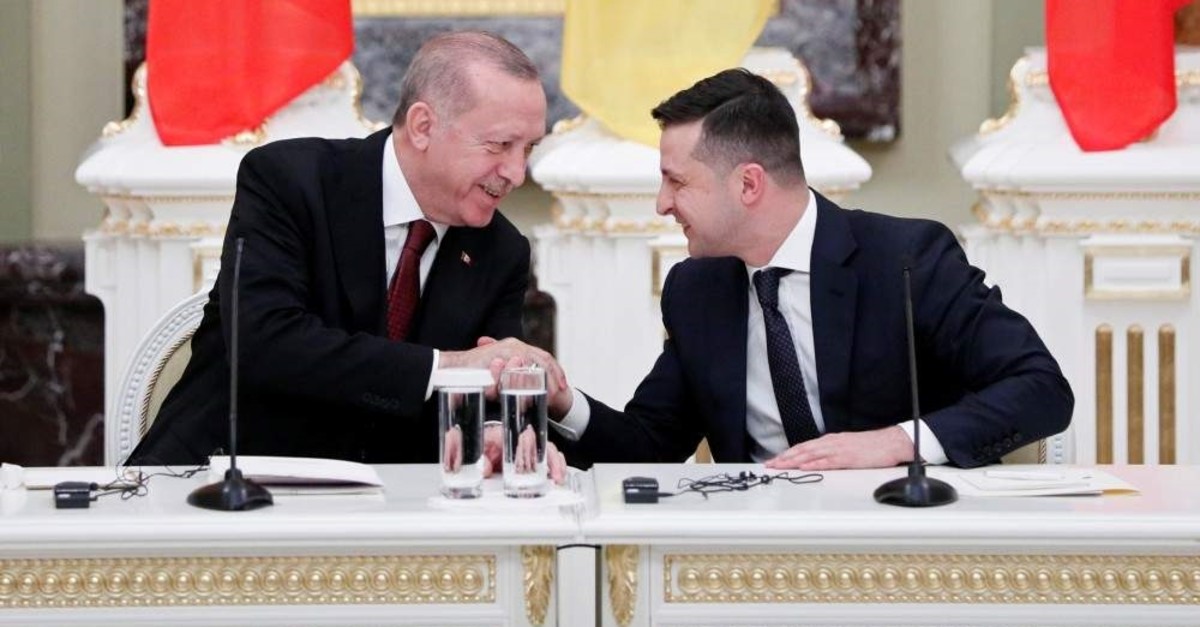 The completion of the free trade agreement is said to enable Turkey and Ukraine to faster achieve their bilateral trade volume target of $10 billion, set earlier by the two states' leaders

Two major Black Sea countries, Turkey and Ukraine, have agreed to further deepen their political, economic, military and security ties which have gradually developed over the last number of years.
The two countries have agreed to complete negotiations on free trade agreement (FTA) by the end of this year, President Recep Tayyip Erdoğan said Monday at a joint press conference with his Ukrainian counterpart Volodymyr Zelensky in the capital Kyiv.
Erdoğan’s remarks came after the leaders held a face-to-face meeting and co-chaired the eighth meeting of the High-Level Strategic Council between Ukraine and Turkey as part of the Turkish president’s daylong visit.
“We have conveyed our requests within the scope of the agreement that was signed today by our trade ministers. We have agreed to complete negotiations on our free trade agreement this year," Erdoğan said.
The FTA carries major importance for the two states as it could help boost bilateral trade volume and enable them to achieve the trade volume of $10 billion, previously set by Erdoğan and Zelensky, who last met in August in Ankara.
“With the conclusion of the agreement, I believe that we will increase our bilateral trade from $5 billion to $10 billion at a much quicker rate,” Erdoğan noted.
The two countries' bilateral trade volume stood at $4 billion in 2018, according to the Turkish Statistical Institute (TurkStat) data, down from $8 billion in 2008.
The president remarked that the two leaders had reviewed all aspects of bilateral relations – economic, commercial, touristic and cultural – which he said have been gradually developing over recent years.
The two countries have also been seeing increasing numbers of tourists since having decided to lift visa restrictions and allow for travel for citizens using identity documents in lieu of passport requirements.
Pointing to the growth of tourism between the two nations, Erdoğan said: “The number of Ukrainian tourists arriving in our country in 2019 reached 1.5 million.” Over 217,000 Turks visited Ukraine the same year, he added.
Growing defense ties
Erdoğan also indicated that the two countries’ defense relations have been also developing rapidly, with military-technical cooperation between Ukraine and Turkey's defense industries carrying various mutual benefits.
Ukraine purchased the Bayraktar Tactical Block 2 (TB2) unmanned aerial vehicles (UAVs) from Turkey last year, as part of an agreement signed between the two countries allowing for the purchase of a total of 12 UAVs. The agreement was signed between the Ukrspetsproject Company, which is part of Ukraine’s Ukrboronprom, and Turkey’s Baykar Makina, the country's leading drone developer. Along with the UAVs, three ground control station systems and various pieces of equipment were agreed upon for delivery to Ukraine.
The Turkish-produced Bayraktar TB2 armed drone provides effective surveillance, reconnaissance and fire support to the security forces thanks to its advanced electronics, software, aerodynamic, design, sub-main systems, autopilot flight capabilities and tested performance, they stand out as one of the most advanced UAV systems in its class.
The militaries of both countries have also been working on a joint production of the AN-188 military cargo plane. The aircraft was set to be produced by Kyiv-based defense company Antonov, with a capacity of 50 tons, while the design, production and test flights are to be carried out by Turkish Aerospace Industries (TAI).
Along with several other recently-inked agreements on military cooperation between Ankara and Kyiv, Turkey’s leading defense companies ASELSAN and ROKETSAN also signed deals with Ukrainian companies in 2017. ASELSAN signed a contract agreement with SFTE Spets Techno Export to supply Zaslon-L'Active Protection Systems, while ROKETSAN signed a collaboration agreement with the same company for the joint development of explosive reactive armor (ERA).
Support for Crimean Tartars
Erdoğan also reiterated Turkey's rejection of the illegal annexation of Crimea, adding that Ankara would continue to support Ukraine’s sovereignty and territorial integrity.
“Turkey is closely monitoring the situation of Crimean Tatars, to continue supporting Crimean Tatar Turks with Ukrainian authorities,” he said.
Also touching upon the Crimean issue, Zelensky said that Ukraine sought Turkey’s support on the release of Ukrainian citizens, including Crimean Tatars, from Russian prisons.
Russia annexed the Crimean peninsula in 2014, while Russian authorities have been cracked down on the Crimean Tatars since, banning their public assembly and television channels, as well as detaining and jailing dozens of activists.
Crimean Tatars are a Muslim community indigenous to the Black Sea peninsula. Pro-Russian separatist groups and the Ukrainian military have been battling in Ukraine's two eastern-most regions for the past six years. More than 10,000 people, including more than 2,700 civilians, have been killed in the conflict, according to estimates by the United Nations.
Last Update: Feb 04, 2020 10:08 am
RELATED TOPICS