Shopping spree on Valentine's Day to hit TL 2.9B 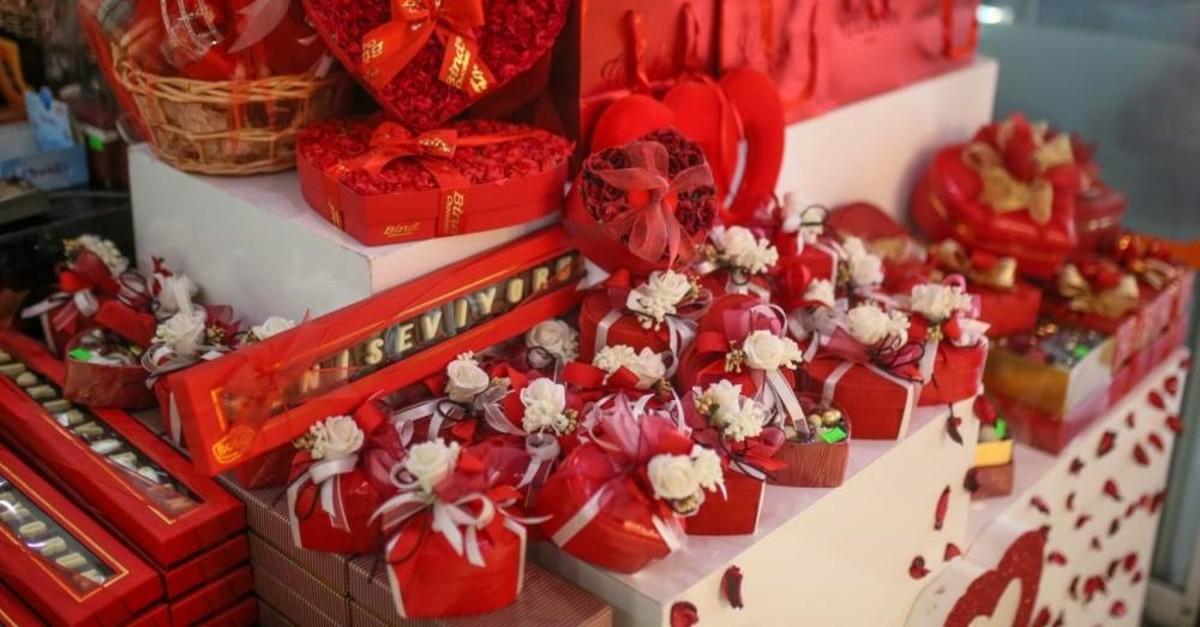 The shopping volume on Valentine's Day, Feb. 14, in Turkey is expected to surge by TL 400 million compared to last year and reach TL 2.9 billion, with jewelry products such as diamonds, and mobile phones, tablet computers and perfume said to be leading in the way so far.

Unlike the previous year, smartwatches and wireless headsets are also the new product groups, with sales increasing the most this year. Restaurants are expected to enjoy this rise exclusively for one day, while hotels have not yet seen any expected dynamism, except last minute bookings.

The United brands Association (BMD) data shows that the largest shopping volume was seen between Feb. 1 and Feb. 14, with a rising share of online shopping.

United Brands Association (BMD) Chairman Sinan Öncel told Turkish Dünya daily Thursday that Feb. 14 is a day on which particularly men buy gifts for their beloved ones, adding, "All the things are about gifts bought for women. When we look at Interbank Card Centre statistics, the biggest increase is in the diamond and jewelry sector. This is followed by electronic devices, such as mobile phones and flowers."

Öncel noted that shopping with credit cards stood at TL 2.5 billion last year, and this figure is expected to rise to TL 2.9 billion this year.

Istanbul Chamber of Goldsmiths Chairman Mustafa Atayık said that dynamism for Valentine's Day started 10 days or one week ago, and shopping peaks on Valentine's Day.

The amount of shopping during the week of Valentine's Day surges by 100% compared to any other week in February, Atayık told Anadolu Agency (AA).

"Special occasions such as Valentine's Day, New Year's Day and Mother's Day are of great importance to the jewelry industry. In these precious periods of time where we remember our loved ones, we, as goldsmiths, achieve approximately 15-20% of our annual turnover," he added.

Indicating that a solitaire ring is almost a must in new marriages, Güzeliş noted that the customers who did not buy solitaire rings when they married five years ago are now fulfilling that responsibility.

Güzeliş stated that their turnover soared by 26% between Feb. 1 and Feb. 9 compared to the same period last year.

Chain Stores Association (KMD) Chairman Yenal Gökyıldırım said sales have been significantly rising since last week. Expressing that mobile phones and tablet computers take the lead among the products sold most, Gökyıldırım said, "This is followed by smartwatches and wireless headsets. There is high growth in the sales of these products. We see a serious shift toward electronic gifts on Valentine's Day:"

Gökyıldırım said the nearly 25% rise in the last few months is likely to continue.

The history of Valentine's Day, which is celebrated every year around the world on Feb. 14 and offers people a chance to express their love to their loved ones, whether materially or spiritually, actually dates back to the third century.

With Valentine's Day now becoming a day that six out of every 10 people celebrate, the experience economy is growing very fast. Special occasions get their share of it. Experience-focused gifts, such as event tickets, courses, holidays, hobby training, spa and hotel bookings, have also been on the rise in recent years.