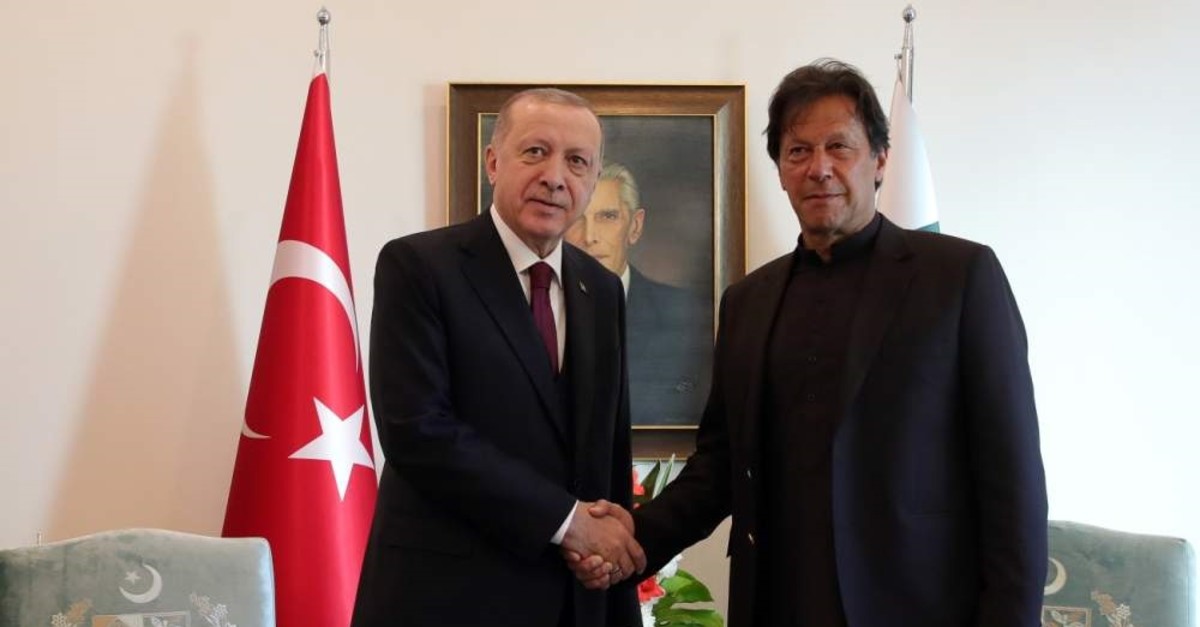 Ankara and Islamabad look to benefit from the increasing trend in recent years and raise their bilateral trade volume to $1 billion in short-term, before eventually increasing it to $5 billion

To fully realize their immense potential, Turkey and Pakistan aim to increase their commercial and economic ties to the level of their political relations, President Recep Tayyip Erdoğan said Friday.

Erdoğan's remarks came in his address at the Turkey-Pakistan Business and Investment Forum in the capital Islamabad, where the president arrived on Thursday for a two-day official visit – the fourth since 2002 and the second since he became president.

"Despite the increasing trade and investments recently, unfortunately, we see that we are far behind our potential in this area," Erdoğan said, stressing the strong drive of both countries' political leadership to support the business world to propel ties to the level they deserve.

The two countries have been fostering deeper socioeconomic relations in recent years, as they have seen their trade volume go up from $600 million to about $800 million over the last five years.

"I frankly do not plan for trade volume between Turkey and Pakistan, with a combined population of around 300 million, to stay at $804 million. We should first rapidly bring our bilateral trade to over $1 billion and then to our target of $5 billion," he said.

Desires alone won't enable the two countries to reach their goals, Erdoğan said, emphasizing that decisive and strong steps must be taken in line with a common goal.

He added that they are aware of the similarities between the two countries, especially in the export of items, but said there are many areas where the two can complement each other.

"Here we have a focus and aim to propel our trade to the level it deserves. For this, we must prevent the rising protectionist walls around the world from coming between us."

Abdul Razak Dawood, Khan's adviser on commerce and investment, was cited by Anadolu Agency (AA) as saying that Pakistan and Turkey will begin negotiations to finalize the Free Trade Agreement (FTA) in April.

There are 158 companies with Pakistani capital in Turkey. The total investment amount of these firms has reached approximately $100 million. On the other hand, 17 Turkish companies are operating in Pakistan.

Turkish firms in the country are operating in multiple areas, including energy, food, cleaning and construction.

An observable acceleration has been achieved concerning the investment, Erdoğan underlined. "Turkey's foreign direct investments in Pakistan have reached $500 million," he said. "Our firms are thinking of further increasing their current investments," he noted, adding that the conglomerate Anadolu Group and chemicals manufacturer Hayat Kimya have plans of additional investments worth about $200 million and $350 million, respectively.

Diary giant Sütaş will soon launch a milk processing plant, similar to the one it has in Turkey and which is the largest in the country, in Punjab with Pakistani partners, Erdoğan said.

The president said they hope the numbers and investments will continue to increase. He stressed that they do not see the difference between Turkish and foreign companies making investments in Turkey, noting that the support they provide for investments and that the country's doors are open to anyone who believes in the country's investment potential.

For his part, Pakistani Prime Minister Imran Khan said the doors of their country are also open for any area Turkey can help Pakistan, stressing his country would do everything necessary to further develop bilateral trade between the two countries.

"We will provide all kinds of support in establishing partnerships between the businesspeople of the two countries, especially in the areas we prioritize. Tourism is one of these areas. The Turkish tourism sector is a very developed sector, and Pakistan has a lot to learn from it," he noted.

One of the countries with the largest young population in the world, Pakistan is also open to investments in information technology, he noted. He also pointed to the country's high potential in mining, saying, however, most of the mining sites are untouched.

"Our doors are open to investors from Turkey, which is far ahead of us in this area. We have fertile land for agriculture, but we cannot use water properly. We should learn the techniques in this field from Turkey," the prime minister said.

Erdoğan and Khan co-chaired the sixth meeting of the Turkey-Pakistan High-Level Strategic Cooperation Council, attended by senior politicians and cabinet members from both sides.

The two countries signed a joint declaration at the conclusion of the session. Turkey and Pakistan inked a string of memorandums of understanding (MoUs) aimed at boosting the existing bilateral trade, economic engagement, and cultural and communication ties.

The MoUs include cooperation between two countries' state-run broadcasters – TRT and PTV – education and overseas diaspora, culture and tourism development and facilitation, halal accreditation and conformity assessment and trade facilitation. They also intend to cooperate in areas like customs, postal services, railway and military training and e-commerce.

Ankara and Karachi agreed to formulate a declaration of an economic framework to increase bilateral trade volume to $5 billion from the current volume of $800 million.

The two countries also signed a MoU in the energy sector. The MoU proposes cooperation in the area of hydrocarbons, joint ventures in exploration and production, and sharing of best practices in natural gas distribution, transmission and wholesale markets in the liquefied petroleum gas market.

Prior to the session, the two leaders met for discussions on a wide range of global and regional affairs.

On Thursday, Erdoğan met with his Pakistani counterpart Arif Alvi, with whom he exchanged views on regional and international issues.

The statement by the presidency said both leaders stressed the importance of the historic bilateral relationship between Turkey and Pakistan in various areas, including politics, economy, culture, defense and people-to-people contact.

They affirmed that both countries would continue to extend mutual support on issues of each other's core national interests. The leaders highlighted the importance of fully realizing the great potential of the relationship between Pakistan and Turkey and transforming it into a strong and dynamic trade and economic partnership, it said.

Also addressing the forum, Trade Minister Ruhsar Pekcan announced that Turkey and Pakistan have agreed on a strategic economic framework and an action plan.

"I believe bilateral investments will continue accelerating thanks to the president's visit to Pakistan," she noted.

Pekcan stressed the importance of Turkish contractors' participation in Pakistan's infrastructure and superstructure investments. "We will utilize the sources of Türk Eximbank and the Asian Infrastructure Investment Bank (AIIB) to finance those projects," Pekcan highlighted.