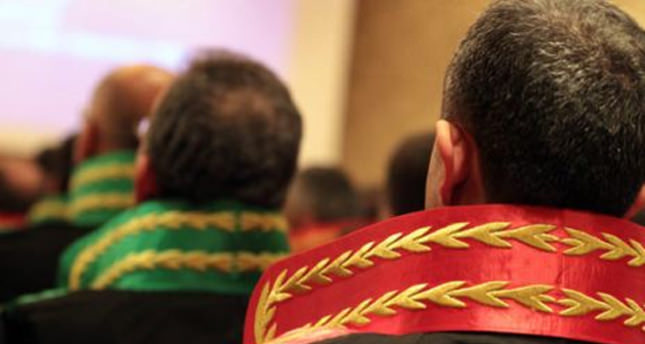 by The Editorial Board Feb 27, 2014 12:00 am
Daily Sabah's first week in business got off to a dynamic start as Turkish newspapers Yeni Safak and Star broke the story of a massive eavesdropping scandal against thousands of citizens under secret court orders. According to the media outlets, prosecutors Adem Özcan and Adnan Çimen -who were reassigned to new posts in mid-Januaryrecorded and stored communications of some 3,000 individuals with warrants issued by a secret court back in 2011. The prosecutors claimed that the targeted citizens were members of a terrorist organization called "Selam" -which, ironically enough, means "peace" in Arabic.

The full list of wiretapped phones revealed that the fictitious terrorist network's membership comprised of an interesting mix that included several members of the Erdogan administration, AK Party and opposition deputies, main opposition Republican People's Party's (CHP) headquarters and a number of journalists. The scandal stirred a massive controversy across the nation and triggered a series of court battles.

Ali Özgündüz, a parliamentarian from main opposition CHP, filed an official complaint with the Istanbul chief prosecutor's office on Tuesday and expressed his interest to sue for damages.

Fatih Tezcan, a pro-government public speaker, tweeted that he "could not figure how he ended up in the same terrorist organization as Can Dündar," a staunch opponent of the administration who was also on the list of terror suspects.

Hours after the story went viral on social media and TV channels, the prosecutors publicly denied their involvement in widespread eavesdropping. While Özcan's press statement suggested that the investigation targeted only "a reasonable number of people," Çimen stated during an interview with Milliyet newspaper that he had no knowledge whatsoever of eavesdropping.

On Tuesday, the Supreme Board of Judges and Prosecutors launched an official inquiry into the prosecutors' alleged misconduct and abuse of power while the Istanbul chief prosecutor's office -which directly oversees both prosecutors' practices- shared details about the Selam investigation that formed the basis of widespread wiretapping. The press statement stipulated that the investigation began in 2011 and continued until Dec. 17, 2013 when police arrested a number of high-profile figures on corruption and bribery charges. According to the chief prosecutor, Özcan and Çimen oversaw wiretapping into private phone calls of exactly 2,280 individuals.

The number of targeted individuals was likely to increase as the official inquiry moves forward, the statement read.

First and foremost, the controversy revolving around arbitrary wiretapping of thousands of citizens raises questions about the exercise of the right to privacy in Turkey, where a Gülenist shadow state seems to eavesdrop on just about anyone due to political differences and opponents' interest in joining public debate on issues that affect the network's opaque interests and ambitions. We firmly believe that the elected government of this country has a duty to protect Turkish citizens from undue and unwarranted harassment at the hands of few strategically-located individuals. As such, the government must strive to prevent similar transgressions in the future, preferably as part of a multi-partisan effort in Parliament.

On behalf of a shocking number of journalists featured in the eavesdropping list, we condemn this abuse of power by the judiciary whose futile attempt to coerce and discredit thousands of citizens must be punished to the full extent of the law and without delay. As Daily Sabah, we call upon international journalists' organizations to protest and take a firm stand against the Gülen network in the face of such blatant targeting of their colleagues.