Armenians should not reject Turkish initiative 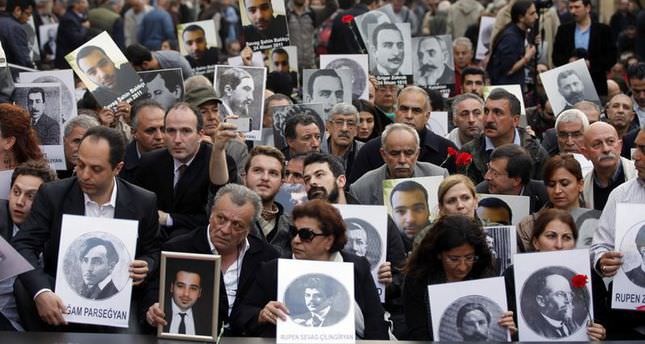 by The Editorial Board Apr 28, 2014 12:00 am
On April 23, Turkish Prime Minister Recep Tayyip Erdoğan published a written statement offering his condolences to Ottoman citizens of all ethnic and religious backgrounds who endured, in his words, what was a difficult period for the empire's entire population.The statement on the Prime Ministry's official website rightfully maintained that it was one's human duty to remember the victims while calling upon all groups involved not to exploit "our shared pain" to promote hostility against the Turkish government.Another important gesture was that Erdoğan's office simultaneously released translations of the original text in a number of foreign languages including Eastern and Western Armenian.

Mr. Erdoğan's latest outreach efforts received mixed reactions. Archbishop Aram Ateşyan, in his official capacity as Patriarchal Vicar of the Armenian Patriarchate of Istanbul, welcomed the prime minister's "exciting" statement and argued that the initiative represented a solid response to all of Turkey's opponents. Similarly, Orhan Dink, brother of the late Hrant Dink who was assassinated in January 2007, maintained that the prime minister's condolences would serve as a cornerstone of the kind of democracy that the country will establish.

Speaking at a vigil commemorating Ottoman Armenians, President Serzh Sargsyan emphasized that his country did not view the Turks as its enemies. Despite the overall positive feedback from Turkey's Armenian community and the Armenian government, lobbyists including Aram Hamparian, who heads the Armenian National Committee of America (ANCA), failed to acknowledge this historic event and dismissed the Turkish government's reconciliation effort as "genocide denial repackaged." Similarly, Mr.Erdoğan's domestic opponents sought to downplay the significance of a Turkish prime minister offering his government's condolences by claiming that the country's political leadership did not act in good faith and was not motivated by genuine sentiments.

In assessing the merits and shortcomings of the prime minister's statement, it is necessary to acknowledge the significant amount of political risk such a step involves just months before a presidential race where most commentators believe Erdoğan will run for the highest public office in the country.To be sure, some supporters of the ruling AK Party expressed a degree of concern in the face of an initiative that sets aside decades of denial and makes an attempt to find some common ground so the two nations can heal each other's historic wounds.Seeking to capitalize on deep-running emotions, senior members of the Nationalist Movement Party (MHP) were quick to dismiss the effort as "a great treason." Furthermore, reaching out to the descendants of Ottoman Armenians inevitably runs the risk of alienating Azerbaijan, a country whose friendship and support remains quite important to millions of Turks and their government.

Despite the aforementioned set of political risks, we believe that Erdoğan assumed a responsible and constructive role at a time when his government could have easily exploited White House statements and commemoration events across the globe to score some points with Turkish voters. Under such circumstances, it was important for the prime minister to take the high road and extend his hand to his Armenian counterparts with no guarantee that his actions would evoke a favorable response. Furthermore, the statement embodied a new thinking within the Turkish government, which has grown considerably more confident and courageous over the past decade.

Appreciating Turkey's most recent effort to rekindle dialogue with the Armenian government, officials in Yerevan should reciprocate and work with their Turkish counterparts in order to initiate dialogue and take a step forward toward reconciliation.

Furthermore, NGOs and public figures in both countries should lend their support to government officials in their pursuit of finding common ground to address the shared pain of our two nations and to ensure that a sense of peace can be restored among the people, not just between their governments.

As Daily Sabah, we welcome the possibility of a healthy dialogue between Turkey and Armenia, and pledge to follow and encourage future developments regarding the issue.