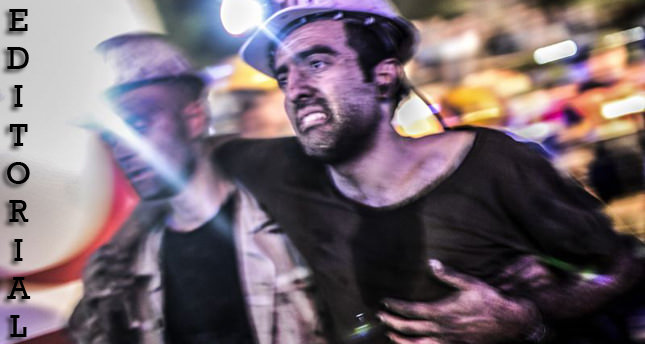 On Tuesday, we received news of a fatal explosion and fire at a coal mine in Soma, Manisa, where several hundred workers have perished according to official data. The authorities expressed concern that the death toll, already alarming and heartbreaking, might continue to rise. Meanwhile, scores of miners who have been rescued from the site are reportedly undergoing treatment in nearby hospitals. Tuesday's events represent one of the greatest tragedies in the history of our nation, and the Soma mine disaster has been carved in our memories forever.
Rapid economic development, while admirable, must entail greater attention to workplace safety among other labor standards. In a written statement on Wednesday morning, the Ministry of Labor and Social Security announced that the accident site had passed regular inspections by ministry officials with flying colors. The most recent inspection at the Soma coal mine, the statement read, took place just two months ago. Had Tuesday's events not unfolded, the mine was scheduled for another regular inspection in four months. While the details of the event remain subject to an official inquiry, it is our understanding that the coal mine complied with workplace safety standards. The question, in light of this information, is whether the existing standards are high enough and what lawmakers can do to prevent similar tragedies in the future.
While the Ministry of Labor and Social Security can document regular checks at the accident site in the past, ensuring workplace safety inevitably requires an effort by the local unions that ostensibly failed to play their inherent watchdog role and pressure management into taking additional preventive measures. News reports that the death toll rose due to an extraordinarily large number of workers being present in the mine during a shift change indicate that the Soma coal mine could have survived a similar accident with so much less human cost by taking reasonably practical precautions.
It goes without saying that management must be held accountable for their blatant disregard for human life and must be prosecuted to the full extent of the law. The fact that key details about the disaster, including the number of workers who were in the mine at the time of the explosion, were not readily available to the authorities leaves no doubt about the extent of managerial neglect and the employer's fault in this tragedy. Various other questions, including whether management updated their map of the mines in compliance with the law, still require answers.
In light of the fatal accident at the Soma coal mine, we are reminded yet again that Turkey needs to develop a culture of accountability. In the face of such senseless human suffering and loss, we firmly believe that government officials who were directly involved in on-site inspections of the mine must resign without further delay and clear their names before the courts. Meanwhile, the Ministry of Labor and Social Security must launch a diligent and detailed investigation into the Soma coal mine disaster in order to identify those responsible and remedy shortcomings in the implementation of the law.
What our nation desperately needs today is honest self-reflection and solidarity, not a partisan tug-of-war. In this sense, we propose that an all-party commission be established in Parliament with a clear mandate to investigate claims of negligence at the Soma coal mine, document the working conditions at the site prior to Tuesday's fatal accident and present its findings to lawmakers in order to institute greater regulations for the mining industry.

As Daily Sabah, we extend our condolences to the families and loved ones of those who perished at the Soma coal mine and wish the injured workers a speedy and full recovery. We also commend the efforts of rescue workers and volunteers who worked tirelessly through the night to keep the hopes of millions alive. May no community suffer such great pain again.
Last Update: Dec 29, 2014 6:34 pm
RELATED TOPICS