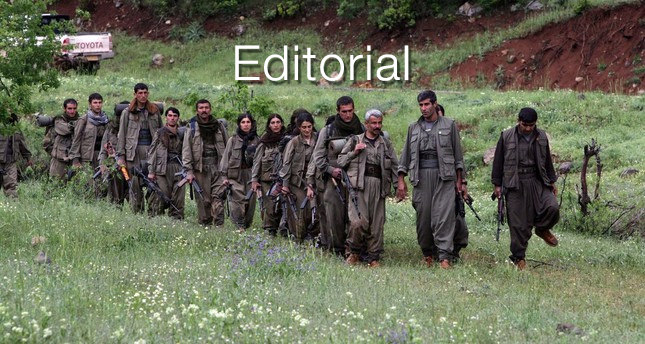 by The Editorial Board May 31, 2014 12:00 am
On May 19, two Kurdish mothers started a sit-in in front of the municipal building in downtown Diyarbakır, a predominantly Kurdish urban center in southeastern Turkey, to protest the outlawed terrorist organization PKK for allegedly kidnapping their 15-year-old children. The protest, which initially received limited attention from local and national media outlets, rapidly evolved into one of the greatest challenges to the organization as the number of mothers participating in the sit-in rose to 30 within two days. On Thursday, media outlets reported that 46 Kurdish mothers had joined forces to call upon the PKK leadership to return their children, who, they claimed, had been kidnapped from various parts of the country including eastern cities of Erzurum and Kars, Mardin province in the southeast as well as İzmir, one of the country's largest urban centers on the Aegean coast. The protesting parents, whose children are reportedly between 12 and 23 years of age, believe that the organization had brainwashed and even used force to recruit new members. In the wake of the increasingly popular protest in Diyarbakır, pro-Kurdish Peace and Democracy Party (BDP) chairman Selahattin Demirtaş met with the protestors and pledged to hold talks with the PKK leadership for the release of their children. At a campaign event earlier this week in Güroymak-Bitlis, where a reelection will take place on June 1 for the mayorship and the municipal assembly, Demirtaş reiterated that his party "strived to bring [the] children back and make sure that none would perish."

The Diyarbakır sit-in, without a doubt, marks an interesting turn of events in the Kurdish peace process, whose launch nearly 18 months ago has led to a lasting ceasefire between the security forces and PKK fighters as well as direct talks between the Turkish authorities and Abdullah Öcalan, the organization's founder who currently is serving a life sentence. Perhaps for the first time, public debate, which traditionally focused on government misconduct, has turned to allegations of foul play by the militants.

The Kurdish peace process, coupled with democratization efforts to safeguard cultural rights and prevent discrimination, has not eliminated the Kurdish population's commitment to identity politics. Nor have disarmament talks lead Kurds to set aside their long-standing demands from the authorities. While the country made significant progress to tackle one of its darkest taboos, the new atmosphere of open dialogue has simultaneously provided an opportunity for the expression of additional expectations and led to a wave of criticism aimed at the government for its shortcomings.

Following a prolonged criticism of the government, the Diyarbakır sit-in puts a spotlight on the PKK and its rapidly eroding raison d'etre. During the 1990s, when the Turkish government sought to crack down on Kurdish demands for recognition and representation through a dirty war, the PKK instantly assumed the role of a militia force to prevent and avenge wrongdoings by the security forces.

Considering a visible shift away from military operations and a novel emphasis on dialogue, however, the Kurds increasingly question whether their self-appointed protectors still deserve a seat at the table. In other words, the disappearance of state oppression seems to have eliminated the reason for tolerating the militant organization, whose fundamental role for years had been to counter-balance the security forces.

The most recent wave of anti-PKK protests in Diyarbakır also represent an opportunity for the Kurdish political movement and the community's advocates in the national political scene. We believe that it was important for BDP chairman Demirtaş, although belatedly, to assume responsibility as a respected member of the Kurdish community and take it upon himself to hold talks with the PKK leadership on the ground for the release of reportedly kidnapped children. There is no doubt that the impromptu reaction to the kidnappings sends a clear message to the organization that they will have to think about the consequences of their actions in the future.

Meanwhile, the government must also draw important lessons from the Diyarbakır sit-in about the need to provide PKK members with concrete opportunities to return home and lead normal lives.

We sincerely hope that the Kurdish mothers who bravely broke their silence in the face of the PKK's recruitment of minors will be reunited with their children without further delay and call upon every part of our society to condemn the subjection of these families to unnecessary grief.
Last Update: Dec 29, 2014 6:32 pm
RELATED TOPICS