Time to turn over a new leaf in Iraq 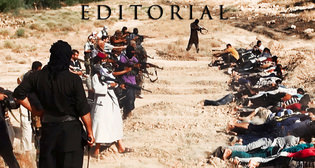 by The Editorial Board Jun 29, 2014 12:00 am
For the past few weeks, the violent campaign of the Islamic State of Iraq and al-Sham (ISIS) against a number of cities in Iraq, including Mosul, has been at the top of the Middle East's political agenda. The failure of the Iraqi security forces to prevent the terrorist organization's progress toward Baghdad, coupled with the ISIS takeover of the country's main oil refinery in the northern city of Baiji, has not only disturbed the delicate status quo within Iraq but also placed the balance of power in the Middle East. The growing risk of violence spilling over to neighboring countries has sent shockwaves through markets, as the price of oil has increased by 4 percent over the past week to reflect the widespread expectation that the developments on the ground will take their toll on the country's oil production.

In Turkey and elsewhere, observers have pointed out that the relative ease with which ISIS militants moved through predominantly Sunni parts of Iraq was indicative of the disillusionment of the country's Sunni Muslim communities with the policies of Prime Minister Nouri al-Maliki, whose favoritism toward Shiite Muslims has been fiercely criticized by Kurdistan Regional Government (KRG) authorities among others. Although the rise of ISIS represents a Sunni uprising whose momentum the Iraqi authorities could break through political reform, the most recent developments will have long-term repercussions for the ways in which regional actors interact among themselves and with the central government of Iraq.

Over the past weeks, the KRG has emerged as the leading beneficiary of the ongoing turmoil in the country. Although some observers have already voiced the argument that the emerging power vacuum in Iraq could serve as a fertile ground for the KRG authorities to launch a bid for independence, the circumstances on the ground remain premature for such a major transformation with serious implications for the entire region. In a recent interview with Christiane Amanpour, President Massoud Barzani said that "the time is here for the Kurdistan people to determine their future," which pundits have interpreted as a clear indication of the Kurdish population's interest in pursuing independence.

While the Kurdish authorities have carved out a considerable amount of economic and social independence from the rest of the country, however, eliminating political borders remains an unfeasible option – unless, of course, the government of Nouri al-Maliki sticks to the sectarian, discriminatory policies that still threaten to drive Iraq over the edge. Against the backdrop of the rising threat of ISIS terrorism and worrying developments in Iraq, Turkey and the KRG have reached new heights in their bilateral relations, as growing cross-border cooperation promises to develop into economic integration. The chaos in the rest of Iraq, which will ostensibly continue in the foreseeable future, also emerges as the main driving force of the KRG's growing eagerness to develop closer political ties with the Turkish authorities. It is important to note, however, that political cooperation does not necessarily entail a re-negotiation of national borders.

In light of the country's current situation, the al-Maliki administration will only make things worse and pave the way for shifting national borders in the Middle East by failing to develop policies to promote the country's territorial integrity and make all social groups feel included. To be clear, having reached a critical point in Middle Eastern history, it has become effectively impossible for al-Maliki to remain in charge. To stop the country from reaching a new low, Mr. al-Maliki should act responsibly and resign from his post without further delay to allow the Iraqi people to turn over a new leaf.

Despite the grave danger stemming from ISIS violence, the existing power vacuum in Iraq poses the most serious and imminent threat not only to the country itself but also the broader region today. The international community, particularly Iraq's neighbors and foreign governments that participated in the country's 2003 invasion, cannot afford to stand idly by as the people of Iraq encounter structural problems that they obviously cannot overcome without assistance. All parties that share the core belief that the stability of Iraq is a safeguard against region-wide decay and turmoil must step up at this critical time and take the initiative to strive toward lasting peace.