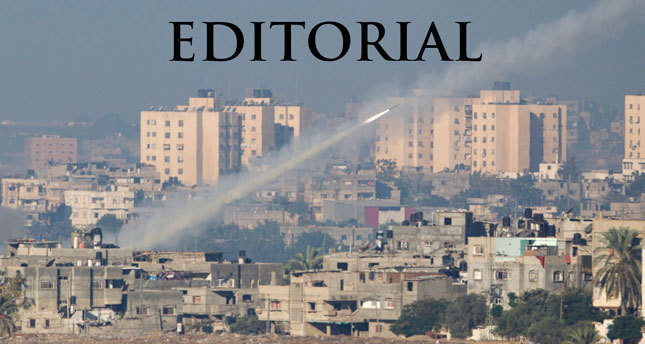 by The Editorial Board Jul 26, 2014 12:00 am
On July 8, Israel initiated Operation Protective Edge under the pretext of responding to the kidnapping and murder of three Israeli teenagers and proceeded to launch a ground offensive nine days later. Nearly three weeks of clashes have claimed over 800 Palestinian lives and left thousands wounded. According to the U.N., the civilian casualty rate remains at about 70 percent. Meanwhile, over 30 members of the Israeli Defense Forces (IDF) have died during the offensive and at least one Israeli soldier has been taken prisoner. Although speculation focused on the future course of the campaign, one thing is certain: Operation Protective Edge has made Israel more vulnerable and less popular than ever before.

Never had there been a time when the world paid so much attention to the Israeli-Palestinian conflict, which has been ongoing for decades with no end in sight. Over the past few weeks, millions of people have taken to the streets in major cities around the world to speak up against Israel's indiscriminate, fatal and illegitimate attacks against the people of Gaza. The reaction has been so strong that French authorities were compelled to impose a controversial ban on pro-Palestine demonstrations in Paris.

The wave of protests, however, received little attention from mainstream media outlets, which largely refrained from covering the events and
instead embarked on a masterfully calculated campaign to justify Israeli atrocities under the pretext of journalistic objectivity. Deprived of the limelight, activists turned to Twitter and other social media platforms to share information and raise awareness about the human tragedy in Gaza, and to organize gatherings and public events.

The Western media unmistakably echoed the sentiments of their governments, who were quick to endorse Operation Protective Edge and invoked the age-old argument about Israel's right to defend itself while turning a blind eye to mounting criticism. International organizations, the U.N. in particular, have also failed this historic test as Secretary-General Ban ki-Moon offered his condolences to Israel, not Palestine, just hours before, ironically enough, an Israeli strike against a UNRWA school killed 15 people and injured 200 civilians. The tragic shortsightedness of the international leadership with regard to ongoing atrocities added to increasingly more popular questions about the legitimacy of the existing global order. At the end of the day, however, the situation in Gaza suggests that the world's most powerful governments, including the U.S., Germany and France, have given Israeli authorities carte blanche to violate international law and jeopardize the prospect of peace. In this sense, various governments that sought to justify the collective punishment of Palestinians by referencing to Israel's right to defend itself have been notably unwilling to address the disproportionate use of force, a crucial aspect of Israel's military operations.

In the wake of the Palestinian people's pain and suffering, Arab governments largely stuck to a painful and absolute silence about Operation Protective Edge. The military junta in Egypt, whose first order of business was to reverse President Mohamed Morsi's policies and close the Rafah border crossing into the Gaza Strip, went so far as to offer the re-opening of Rafah in return for the Hamas leadership's commitment to a truce with Israel. Meanwhile, we condone the efforts of Turkey and Qatar, in particular, to broker a ceasefire without losing sight of the interests of the civilian population in Gaza.

The ultimate result of Operation Protective Edge, however, relates to Israel itself, as the country faces greater physical and diplomatic isolation. The ongoing wave of attacks, which immediately followed the formation of a unity government by Hamas and Fatah, raises questions about Israel's commitment to the peace process. Operation Protective Edge has already had adverse effects on the country's relations with the broader Middle East and various parts of the world, as a number of governments including Venezuela, Bolivia, Brazil and Chile followed Turkey's example and cut their diplomatic ties with Tel Aviv. The ground offensive has also alienated a generation of young people in the Middle East who led the charge against authoritarian regimes during the Arab Spring. Protests in Western capitals indicate that the situation is hardly different there.

As Daily Sabah, we call upon all concerned governments to boycott the upcoming general debate at the U.N. General Assembly to protest the international community's stance on Israel's aggression and pay their respects to the victims of Israeli attacks, both dead and alive. Israeli authorities and their supporters must understand that the Palestinian cause, like the anti-apartheid movement in South Africa, has reached a critical mass. Things will never be the same again.