The case against Turkey’s military engagement in Syria 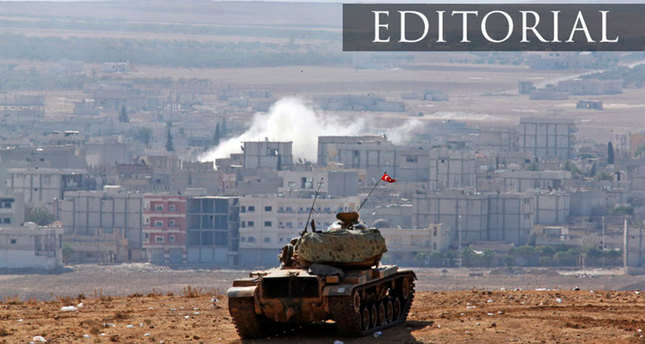 by The Editorial Board Oct 10, 2014 12:00 am
Over the past couple of weeks, the rapid advances of the Islamic State of Iraq and al-Sham, or ISIS, toward Kobani, a predominantly Kurdish border town across from Suruç, Turkey, has captured the attention of international media outlets as a symbolic fight between the Democratic Union Party (PYD) militants and ISIS - which a successful media campaign has dubbed as the struggle between civilized men and villains.

In the wake of the episode, the Turkish government has, as it did countless times before, raised the point that the clashes in Kobani, however sad, must not distract attention from the bigger picture while stating that peace cannot come back to Syria in the absence of a comprehensive roadmap that involves the end of Bashar Assad's regime. Unwilling to commit to a military campaign with no visible end or strategy nor benefit to its national interests, the country instead saved the lives of over 185,000 residents of Kobani, most of them women and children, and ensured that at least 565 wounded, including members of the PYD forces, receive proper medical treatment. According to the Disaster and Emergency Management Authority (AFAD), Turkey single-handedly spent over $4 billion (TL 9 billion) to humanitarian relief efforts. In the wake of the most recent influx of Kurdish IDPs from Kobani, the total number of refugees - Arabs, Kurds, Turkmens and Yazidis - in Turkey has exceeded 1.6 million, which, according to the Global Humanitarian Assistance report, made it the most generous country in the world. The Turkish government's humanitarian relief efforts have also received praise from international organizations such as the UNHCR, whose top official in the country, Carol Batchelor, recently stated that "the U.N. could not catch up with Turkey."

Turkey's commitment to alleviating the suffering of displaced civilians, however, seems to have been quickly forgotten amid frustration about the country's lack of eagerness to jump into an open-ended war against non-state actors inside Syria on behalf of others who enjoy a comfortable geographical distance from the battleground. Although some international media outlets were quick to dismiss Turkey's humanitarian efforts to complain about the country's so-called inaction, a recent editorial in The New York Times set the bar quite high for others seeking to make unsubstantiated accusations against Turkey. Claiming that the Turkish government not only declined to launch an all-out military campaign in Syria but also "refused to help in other ways," the NYT Editorial Board conveniently omitted the fact that the country welcomed more Syrian refugees in the first 72 hours of the ISIS siege than all European countries combined admitted since April 2011 and while cautioning the Obama administration against putting "America on a slippery slope to war," the newspaper demanded that Turkey, a NATO ally, that has received little assistance from the organization when, say, one of its jets ended up at the bottom of the Mediterranean Sea, enter Kobani without further delay - with no reference, of course, to statements by Kurdish nationalists including PYD leader Salih Muslim warning against Turkish troops crossing the border nor to the fact that the same groups launched a vendetta against competing Kurdish movements including Masoud Barzani's Kurdistan Democratic Party, or KDP, under the guise of anti-ISIS demonstrations which claimed 23 lives in 48 hours and caused massive damage to public and private property. Who, after all, has time for such minor details and moral dilemmas in Midtown Manhattan?

As Daily Sabah, we call upon the Turkish government to avoid an unnecessary military expedition in Syria and Iraq as well as to refrain from placing the lives of Turkish citizens, or the country's economic stability and development, at risk. Keeping in mind that members of the international community, notwithstanding their acknowledging the inadequacy of air strikes in neutralizing the threat of terrorist groups, remain unwilling to put boots on the grounds, we find it difficult to understand how a military campaign could serve Turkey's national interests unless the country's partners commit to a lasting solution to the Syrian civil war and to bringing Bashar Assad to justice for crimes against humanity. The lack of a morally acceptable, long-term objective would also fall short of providing the people of Turkey, the majority of whom oppose military engagement, with a good enough reason to change their minds about the U.S. government's latest venture in the Middle East.