A responsible response to terrorism 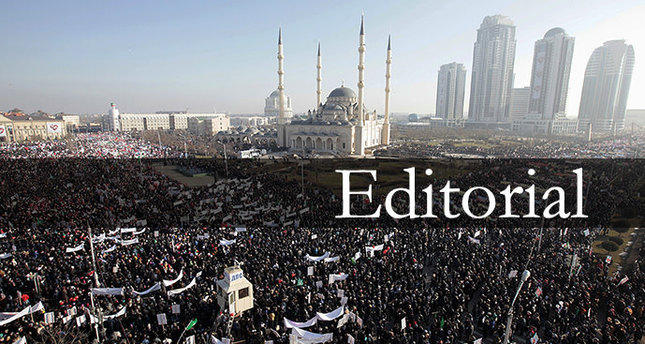 by The Editorial Board Jan 20, 2015 12:00 am
On Jan. 7, 2015, a small group of armed men raided the Paris headquarters of Charlie Hebdo, a French satirical weekly newspaper best known for publishing infamous cartoons of Prophet Muhammad nine years ago, and murdered 12 people, including Muslims, in cold blood. Nasr al-Ansi, a top commander of al-Qaida in Yemen, eventually claimed responsibility for the deadly assault. Over the past two weeks, there has been a lengthy and inconclusive global conversation about the terrorist group's motivations. Others questioned whether or not Charlie Hebdo's editorial policy was covered by freedom of expression. Some, fortunately a minority, rushed back to the Clash of Civilizations hypothesis. Here's the bottom line though: Terrorists, not Muslims, perpetrated these deplorable acts on that day. And it would be completely misguided to reduce their actions to the religion they claimed to observe.

The violent act itself represents an undeniably and infinitely interesting phenomenon for journalists, politicians, religious leaders and ordinary citizens around the globe. Faced with such senseless pain, we are inevitably drawn to the act - its perpetrators, the background, the car chase. Yet zooming in on the violent act itself, we deprive ourselves of the opportunity to develop a more complex response to violence than simply more violence. Still, concentrating on the violent assault means the vast majority do not have to leave their comfort zone - where we can make the occasional racist slur or bit of hate speech in the heat of the moment. The longer we get stuck in the moment of transgression, the more injustice, mistreatment and inequality we can justify in reference to it.

The broader picture, which provided the context for the attacks, relates to the question of integration and diversity in Europe. This is a picture all too familiar to the world: The prolonged economic turmoil in the continent led to the rise of right-wing extremism whose attacks, verbal and physical alike, alienated Muslim communities in their societies and left a small, disenfranchised minority vulnerable to the sales pitches of radical organizations. Long have European leaders conveniently avoided this pressing issue by blaming urban violence on petty criminals and resorting to populist speech when the situation called for concrete, constructive steps.

Today, European leaders and intellectuals have the historic responsibility of rising to address the roots of the problem and rise to the challenge of extremism before the emerging cycle of violence consumes all parties involved. They must take the necessary steps to ensure that similar attacks do not happen in the future - not through additional security measures but by making sure that every citizen, regardless of their background, feels included. History teaches us that Western societies tend to respond to violent attacks with xenophobia and Islamophobia, which makes the Muslim citizens of France, Britain, Germany and others feel like strangers in their homelands. We cannot expect hard-working Muslims around the globe to take the blame for the Charlie Hedbo attacks by treating all Muslims as potential aggressors. This time around, European societies simply have to prevent right-wing extremists and radical organizations such as al-Qaida from exploiting the immigration debate for political gain.