Crucial mandate against terrorism in Parliament 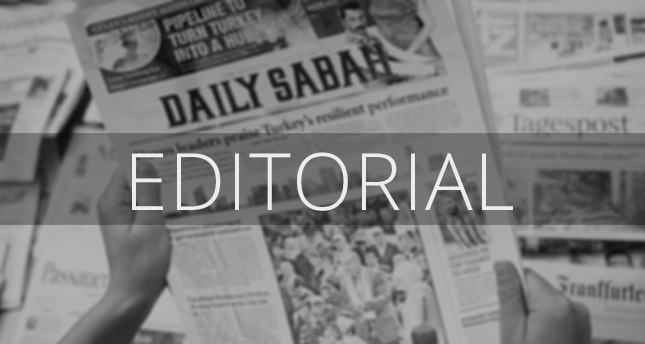 by The Editorial Board Sep 03, 2015 12:00 am
A Turkish soldier died and another went missing in clashes in the border town of Kilis late on Tuesday. The attack came from Syrian territory occupied by the Islamic State of Iraq and al-Sham (ISIS). This is not the first attack perpetrated by the terrorist group against Turkish targets. On March 20, 2014, three ISIS members attacked a gendarmerie patrol, killing a soldier, a police officer and a civilian before being detained. On June 11, 2014, ISIS forces that occupied Mosul took 49 Turkish citizens, including diplomatic personnel at Turkey's consulate hostage, releasing them 101 days later. They proceeded to lay siege to Turkey's only territory abroad, the tomb of Süleyman Shah in Syria, forcing authorities to relocate the tomb to a safer area. On Jan. 6 this year, a female suicide bomber killed a police officer in Istanbul's Sultanahmet Square. A bomb attack on a pro-Kurdish Peoples' Democratic Party (HDP) rally in Diyarbakır two days before the June 7 elections, killed four and wounded 402. The group's biggest attack to date was on July 20 in Suruç, which killed 33 people, wounding scores. ISIS, in videos it released as of late, said it saw Turkey as a godless state and accused President Recep Tayyip Erdoğan of being a heretic, calling for his murder. ISIS attacks, coupled with the escalating PKK violence, risk creating instability at a time when Turkey is passing through a critical juncture and threaten both national and international security.

There is a state of open war between Turkey, which is an active participant in the U.S.-led coalition, and ISIS. The Turkish military, one of the strongest in the region, is conducting ground and aerial attacks on ISIS positions. The morbid list cited above shows there is a significant cost to Turkey's fight against ISIS. However, Turkey is being forced to wage a war of critical importance to the region and the world with both hands tied behind its back. Turkey's security forces are compelled to fight against ISIS while combatting the increasingly virulent PKK terrorist group.

Meanwhile, the government is forced to refute spurious reports appearing in Western media that claim Turkey is cooperating with ISIS. Some media organs are even trying to legitimize the PKK by publishing photogenic photos of youngsters, which no one should doubt were either tricked or kidnapped into joining the group.

The world needs to act responsibly and join Turkey in its fight against terrorism in all its forms and ensure the strength of the Turkish military is not sapped by needless demoralizing propaganda. Arguments voiced by Turkey about the civil war in Syria have failed, the growing refugee crisis and many other critical regional developments were ignored by Western countries, which now are forced to face the repercussions of their lack of judgment. Their current attitude of discriminating among terrorist groups will have similar consequences in the future.

Parliament is set to meet today for an emergency session to vote on a new bill extending the authority of the military to deploy and conduct operations abroad and allow foreign military personnel to deploy in Turkey, which is necessary for coalition fighter jets to strike at ISIS positions from İncirlik. This bill is part of the government's comprehensive re-evaluation of its counterterrorism strategy. This strategy, identified as "Preemptive Defense," means the military is ready to expand its operations to whenever and wherever necessary to combat terrorism. Such a change of vision is essential when one considers that neither group discriminates among civilians or soldiers. Allies need to realize that Turkey's new counterterrorism strategy is of crucial importance to the peace and security of the region and the world and should act accordingly.

In addition to the Justice and Development Party's (AK Party) wholehearted support, the opposition Republican People's Party (CHP) and the Nationalist Movement Party (MHP) have both announced their intention to back the bill in Parliament. However, the HDP, which has been repeatedly targeted by ISIS, has decided to reject the bill in an attempt to protest the destruction of PKK bases in the Qandil Mountains. The HDP is willing to sabotage the fight against ISIS just to placate another terrorist group. Just like Turkey, the HDP is also facing a transformative juncture, which it needs to make use of in favor of peace for the entire country, and be more honest to itself and its supporters.

No one should have any doubt about the fact that today's vote in Parliament is of vital importance in Turkey's fight against terrorism and security in the region and every parliamentarian needs to be aware before casting his or her vote.
Last Update: Sep 03, 2015 10:44 pm
RELATED TOPICS