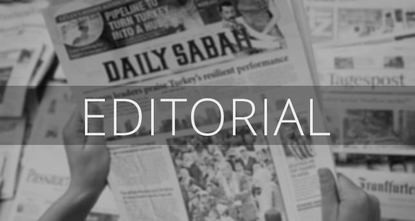 by The Editorial Board May 14, 2016 12:00 am
On Wednesday, European Parliament suspended its work on visa-free travel for Turkish citizens, citing Turkey's failure to meet all 72 technical benchmarks necessary. European leaders such European Parliament President Martin Schulz would like you to believe the decision was made because Ankara was unwilling to revise its counterterror laws. In truth, the problem is that a bunch of people playing politics in Brussels are trying to save their careers by driving the Turkey-EU deal, and Europe with it, into a concrete wall.

Europe has perfectly nice people occupying important posts. Mr. Schulz considers himself a progressive. Italian Prime Minister Matteo Renzi rides a bicycle to work. And British Prime Minister David Cameron is a tax evasion enthusiast who likes to complain about corruption in Nigeria and Afghanistan. Indeed, European voters have great taste in politicians; politicians who are not actually decision makers.

You will not find Europe's decision-makers in Brussels. People like the far-right party leaders Marine Le Pen of France, Geert Wilders of the Netherlands and Nigel Farage of the U.K. are looked down upon by the European establishment as racist, intolerant fear mongers. To be clear, though, it feels like the far right has been calling the shots in Europe for some time.

Here is what many Turks believe happened over the past months. No longer believing they could get back home, thousands of Syrian refugees started paying human traffickers and risking their lives at sea to reach the Greek islands. At first, Europeans were being, well, Europeans. People gave food and clothes to Syrian refugees. Activists collected toys for Syrian children who had been born among savages but had finally reached a civilized land. Then things took a downward turn as Syrian refugees started waking up in the middle of the night to find their newly found homes on fire. Others were beaten to death on the street. And a handful of Syrians were lucky enough to have Denmark confiscate their belongings.

When things got out of control, European leaders, led by German Chancellor Angela Merkel, came up with a brilliant plan. They were going to send refugees back where they came from and give Turkey some money to make sure they would not come back. Millions of Turkish citizens – scary, scary people indeed – would be eligible for visa-free travel to the EU's Schengen zone, they said. In March, Turkey and the European Union shook hands on the deal and the readmission process kicked off in early April. When it came to keeping their promises though, the EU proved less than willing to follow through.

If the story of European leaders shaking hands on a deal and failing to keep their promises sounds familiar, and that is because it is. In 2004, European leaders had told Greek Cypriots that they would not be admitted into the EU if they failed to adopt the Annan plan. When they called Europe's bluff, Brussels welcomed Cyprus with open arms. When the deal was struck in March, the Turkish people kind of felt they knew how the story would end.

At a joint press conference with Schulz in Strasbourg this week, Turkey's EU Minister and Chief Negotiator Volkan Bozkır told reporters that the EU needs to stop treating the disagreement over his country's definition of terrorism as a math problem and called on European leaders, to no avail, to work with Ankara.

Although the definition of terrorism had never come up in formal negotiations, European leaders thought it would be a good way to derail the process. The fact that they do not know what they do not like about Turkey's counterterrorism laws is proof enough that this is not an actual conversation on policy. It is a ploy to please the neo-Nazis back home.

What is at stake here is not visa-free travel for Turkish citizens. The Turkish people hardly care about this issue, and Turkey's leaders do not treat visa liberalization as a priority. Instead, the big concern is that the EU's short-sighted leaders are about to prove their word means nothing and people around the world should not consider them reliable allies. EU leaders have one more shot to rise to the challenge of history. If they fail, the neo-Nazis back home will actually replace them.
Last Update: May 22, 2016 1:07 am
RELATED TOPICS