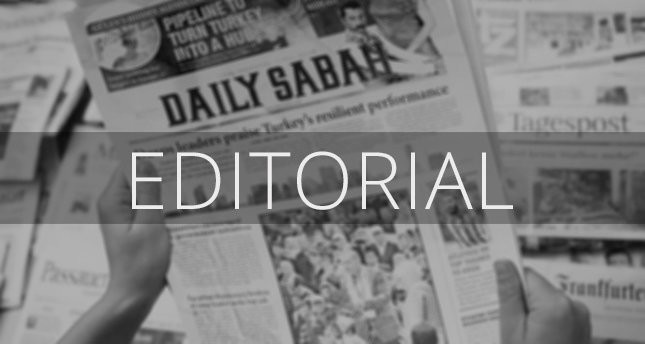 The 7-million-strong Turkish diaspora across Europe is a hugely important constituency that all political parties in Turkey are trying to woo before the April 16 referendum on constitutional changes. Politicians who are campaigning against the changes received full freedom to drum up support to attract voters in European countries.

Groups linked to the PKK, which is recognized as a terrorist group in the EU, even held several rallies in Germany and Austria to campaign for "no." On the other hand, members of the democratically elected government, including ministers, have been banned from campaigning in countries with the largest Turkish communities, Germany, Austria and the Netherlands.

On Saturday, the Dutch government canceled Foreign Minister Mevlüt Çavuşoğlu's flight clearance, and forcefully blocked Family and Social Affairs Minister Fatma Betül Sayan Kaya's convoy from entering the Turkish consulate in Rotterdam. The Dutch police detained each and every member of the family minister's entourage, assaulted Turkish citizens protesting their conduct and journalists. Lastly, they declared the minister an "undesirable alien" before deporting her back to Germany.

Far-right demagogue Geert Wilders, the chairman of the Party for Freedom (PVV), soon after tweeted: "Go away and never come back @drbetulsayan and take all your fans from The Netherlands with you please #byebye."

The Dutch government's latest actions show that previous criticisms for their fascistic tendencies pales in comparison to what they truly deserve. The Netherlands appears to be going through a sort of mass psychosis. It is disconcerting to witness a full-blown Nazi revival across the continent.
What's even worse is the total silence that has descended on the capitals of Europe at a time when one country after another is surrendering to fascistic forces. It should be noted that this silence itself was what allowed agitators like Wilders to thrive.

The predecessors of the current generation of European politicians were brought up on warnings about never allowing a "second Munich." When the representatives of Western democracies surrendered to Adolf Hitler in Munich on Sept. 30, 1938, allowing Nazi Germany to occupy Czechoslovakia, not only were they judged as "appeasers against aggressors" by history, they also failed to satiate Hitler's hunger for more. These days, the mainstream politicians in Germany and the Netherlands, are trying to appease the rising racist tendencies among their population, once again adopting anti-Turkish rhetoric and acts to placate the extremist forces.

The leaders of European countries are failing their people by appeasing the extremist voices, seemingly oblivious to the dangers inherent in their actions. Such conduct will benefit no one, especially themselves. Once allowed to freely dominate the narrative, racist demagogues like Wilders will also disregard those who facilitated their rise. This uncontrollable vicious circle will feed racism and Turkophobia that many European leaders seemed to be fond of using.

The current legitimacy crisis the mainstream European parties find themselves in will eventually lead to their usurpation by extremists, with the so-called European values being lost in the turmoil.

Let no one be in doubt that the crisis is not between the EU and Turkey, but within the EU itself.

We are extremely troubled about the constant erosion of values and principles among the European countries and have serious concerns about the welfare and safety of our citizens.